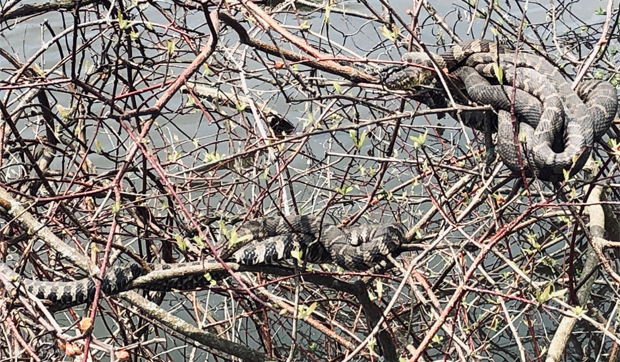 Photo Caption: Northern water snakes are common throughout our area and can be identified by their unique markings. Color, however, is highly variable and can range from brick red to brown to almost black.

I’d like to start this week’s column with a quick note of thanks. So many of you Good Natured readers have taken the time to write or call to share a story or ask a question…you’ve added a sense of normalcy to these strange, covid-infused days, and I really, really appreciate it.

It’s reassuring to see that, despite the upheaval in our human affairs, life in the natural world is proceeding as usual-and maybe even better, considering we’re for the most part not out there, getting in the way.

As I peer at my laptop in my dining room/office, blowing my overgrown bangs out of my eyes, I see reports of cute little owlets exploring the wide world beyond the nest, some for the very first time. I read stories of toads singing in ponds because, hallelujah, it’s finally warm enough for them to get their game on. And I’ve got some neat pictures here of snakes hanging in trees. Oh boy!

Local resident Gerilynn Fischer-Hudson took the photos during a visit to Norris Woods on Saturday May 2. That day, as you may recall, was wonderfully warm and sunny-exactly the type of weather that promotes outdoor activity. People were hiking, people were biking, and amid all the activity, northern water snakes were hanging out in the trees, psyching out pretty much everyone who noticed.

As I told Gerilynn when I responded to her email asking for information about the snakes, if she’s wondering about them, I’ll guarantee others are too.

The northern water snake, Nerodia sipedon, is a nonvenomous species that commonly resides alongside streams and ponds throughout our area. They lead a fairly quiet existence throughout much of the year, adding to their substantial girth by feeding on fish and frogs that inhabit the shallows and shorelines. But if perchance they do get noticed-well then, that’s when the excitement begins.

There’s something about fat snakes lounging about in or near water that triggers alarm even among seasoned outdoor enthusiasts. Maybe it’s a relic of our ancestry, where large snakes did indeed present a clear and present danger. Or maybe it’s because of their resemblance to venomous species like the cottonmouth, Agkistrodon piscivorus, which also goes by the common name water moccasin.

Whatever the reason, I’d say northern water snake sightings generate as many, if not more, questions than all other local snake species combined.

To top it off, during certain times of year they display a behavior that Gerilynn was fortunate enough-or unfortunate enough, depending on your mindset-to view: they bask in groups.

As we progress through spring, temperatures moderate and the water snakes’ hibernacula, or underground overwintering sites, begin to warm. As if by cue the snakes emerge, driven by three primary urges: to warm their ectothermic or cold-blooded bodies; to feed their long-empty bellies; and to find a mate to ensure future generations of Nerodians.

Arrayed on branches near water, often in close proximity to one another, the snakes can pretty easily accomplish all three of these tasks. Even better, the elevated location offers the added benefit of helping the snakes’ scales dry completely. Even though they’re called water snakes, their skin, like ours, can blister and become infected if it stays wet all the time.

As you look at Gerilynn’s photo of the Norris Woods snakes, I’d like to walk you through a little identification exercise. That way, the next time you see a snake near water-even if you’re not here in Kane County-you can quickly determine whether it’s N. sipedon or somebody else.

As you look at the clump of snakes on the right side of the photo, you’ll notice that one has its head sticking out. Right behind the head, you’ll see there are dark bands traversing the snake’s neck. Got it?

Okay, now as we move farther down along the clump-don’t worry about which snake is which, as they’re in quite a tangle-you’ll notice that the neck pattern has morphed into a pattern of alternating blotches. No more bands.

And that’s it! Remembering that change in marking is all you need to do to reliably identify the northern water snake from any other blotchy, squiggly, scaly creature.

It’s a handy skill to have, and one that will surely impress your friends, be they snake fans or not. Go ahead and give it a try the next time you’re out and about near water.

You can thank me later.