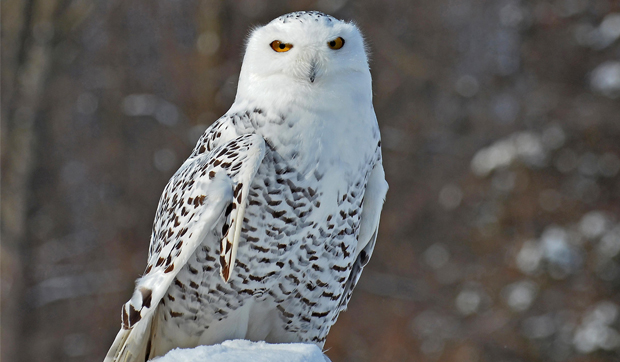 It’s snowy owl season once again. Look for this regal visitor from the north in farm country, atop fence posts and utility poles.

Not only do I remember where I saw my first white owl, I also remember when.  I was four years old, poking around my grandparents’ basement on a fine winter’s afternoon, when I spotted it on a shelf next to the coal bin. Both wise and droll, it stared out at me from the inside lid of a propped-open cigar box as it presided over Grandpa’s collection of hardware odds and ends.

I was more than a little surprised to see it there, since all the other boxes were Dutch Masters and Muriel-brands I felt I knew. (Let’s just say, even at that tender age, I’d had more than a few puffs on my uncles’ cigars. But that’s another story for another time.) Suffice it to say, that White Owl really threw me for a loop.

Little did I know that, a scant 50-some years later, I’d again be loopy over a white owl. But this one’s not on a box. It’s Bubo scandiacus, the snowy owl.

Besides cigar boxes, and Harry Potter movies, snowy owls can most reliably be found up north. And by north I’m not talking the Northwoods of Wisconsin or Michigan’s Upper Peninisula or even Minnesota’s Boundary Waters. Nosirree. These are birds of the extreme north, as in the Arctic Circle. Their summer breeding grounds are the amid the treeless tundra, where the availability of their No. 1 prey animal-lemmings-determine whether the owls reproduce in high numbers, low numbers, or not at all.

I know what you’re thinking… Northern Illinois might be Up North to residents of, say, St. Louis, but even on its coldest days our area is nowhere near being tundra. Why is it then that I’m so hopped up about snowy owls?

Well, it turns out that even though they are animals of the Arctic, snowies do make fairly regular appearances in our area once the cooler weather sets in. The first reports usually start rolling in around Thanksgiving and continue throughout the winter months. This year, we’ve had sightings along the Chicago lakeshore, most notably at Waukegan Harbor and the South Shore area but also in Will, DeKalb and Lee Counties.

From time to time major influxes called irruptions occur on a schedule of sorts that repeats about every four years-a timetable that seems to follow the boom-and-bust nature of Arctic lemming populations. When lemming numbers boom, so to speak, every three or four years, the animals that feed on them see a similar uptick and many snowies-typically young of the year-hit the skies for points south.

The winters of  2013-’14 and 2017-’18 were big years for snowies in our area, and if my math is correct, next winter we’ll be due for another flurry of snowies. But if you don’t want to wait until then-I know I don’t-here are a few tips for increasing your chances of spotting one this winter.

First and foremost, try to think like a snowy. As an Arctic animal, you’re going to seek out places that seem familiar to you. We’ve already established that Illinois isn’t tundra country, but it does offer miles and miles of flat, tundra-like expanses of farmland.

As we continue this line of thought, what is it that you, er, snowies, like to eat? Oh yeah-lemmings. Illinois’s lemming population is pretty much zero, but you know what we have a LOT of? Voles. Round, chunky and chockful of nutrients, voles are close cousins to lemmings and make for a filling winter repast.

So heading out to farm country, where fallen grain and therefore voles are plentiful, is a great way to start your snowy search. Most of us, I’d wager, live within an hours’ drive of this sort of habitat.

We also know that variety is the spice of life, and our substitute tundra here in Illinois offers a couple of nice amenities snowies might not have in the Arctic but do make good use of here: utility poles and fence posts. Both offer the owls the advantage of elevation, where they can survey the surrounding area both for prey as well as potential threats-namely other raptors also seeking prey.

The takeaway here: As you drive those country back roads, surveying the snow-covered fields, be sure and look up on those poles whizzing past.

We should probably also make note of exactly what it is you’re looking for. If you’re only reference is a cigar box, you could very well miss out. The bird on the White Owl label is a male snowy and as such is almost pure white. But female and immature birds actually have a good deal of dark barring across the breast, back and wings. Contrary to what you might think, these dark markings actually help the bird blend in against a background that might include not only snow but also soil and shadows.

In fact, it’s young birds that we most often see in this area. Which makes this last point all the more important. Even though seeing a snowy owl might be the most important things on your New Year’s To-Do List, please, please, please be respectful of these birds. Many of them are inexperienced and stressed; the last thing they need is a raucous human pointing out their presence.

Should you spot one, don’t make any sudden moves or loud noises. Take a picture if you’d like, but use your biggest telephoto lens or maximum zoom so you can keep your distance. Any time these birds have to take flight, they will be burning hard-earned calories that most can’t afford to lose.

One other thing you can do, as a help to fellow birders and researchers alike, is to report your sighting. The website www.ebird.org, maintained by the Cornell Lab of Ornithology and the National Audubon Society, welcomes reports from across the country. On a local level, you can let me know via phone or email. I’ll add your info to the informal database we maintain here at Good Natured World Headquarters, and maybe even celebrate with a cigar.

Here’s hoping at least some of us find a snowy owl in this new year. Good luck, good birding, and Happy 2021!