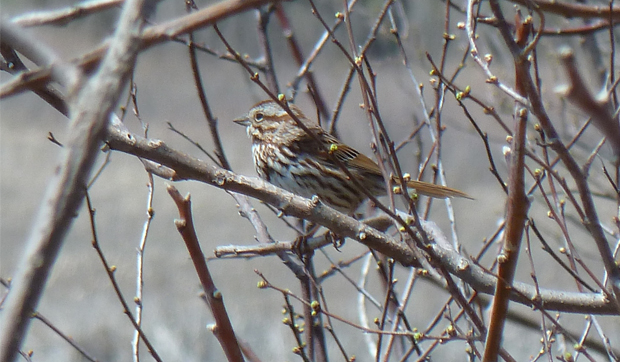 No, it’s not the talk of some crazed sugar fiend craving yet another dessert (though I think I did babble something similar around Month 10 of The Quarantine. Details are hazy but cookies and cake, plus a large bag of Bit O’ Honeys were involved. Afterward I vowed I’d never eat candy again. But I digress.)

Getting back to those sweet, sweet notes… They are the masterful work of the male song sparrow, Melospiza melodia.

These past few weeks, these fellows have really kicked into high gear.

Last week at Otter Creek Bend Wetland Park in St. Charles, for example, in between the persistent songs of red-winged blackbirds, I counted three different male melodias singing their notably dissimilar songs from prominent points around the park’s eastern half. The sun was shining, the temperature was mild … clearly, it was a great day to get out and sing claim to the best breeding territories.

Which is exactly what these guys were up to. I don’t know whether they were recently arrived migrants or year-round residents (song sparrows can be either in our area) but one thing was sure – these tuneful songsters were definitely living up to their name.

Song sparrows are one of several kinds of birds that learn their songs from “tutors” – older members of their species that serve as models for younger birds. Because it’s learned and not innate, each bird’s song is just a little bit different from those around it. (Think back to when you learned how to write in cursive. Did your letters look the same as the teacher’s?)

Song sparrow songs often start out the same; perhaps evolution has favored those particular notes. (I know someone singing “sweet, sweet, sweet” would definitely get my attention, especially if I was hungry.) But from there the lilting song veers off into a variable series of clear notes and trills, an exclusive composition created by the singer.

So gifted, song sparrows aren’t shy about exhibiting their talents. Nor are they lazy. In one often-cited study, a male song sparrow repeated his tune 679 times over a three-hour period. That’s just over 226 songs an hour, or four songs a minute. (Faster than I can eat Bit O’ Honeys, for sure!)

Multiplied out over a 15-hour day, these numbers tally up to more than 3,000 songs a day. Yow. It’s a wonder they’re not called hoarse sparrows.

But for birds like song sparrows, singing is a necessary part of life. Like the “Occupado” sign on the door of an airplane lavatory, the songs serve as a warning to other birds that a particular territory is taken. Further, like the song “Indian Love Call” in the old movie “Rose Marie,” the songs also serve to attract a mate.

I don’t know if you’ve seen that film but, in the end, Nelson Eddy and Jeanette MacDonald end up together and presumably live happily ever after. For song sparrows, happy and ever after aren’t always a given.

For one thing, it’s been noted that male song sparrows tend to want to sing more than help out around the nest. In one study on nest building, an activity supposedly shared by a mated pair, the male was “more inclined to shirk his share, picking up material, dropping it and picking it up again, singing meanwhile.” In another, researchers wrote that “the male devotes himself more to song than to labor.”

Provided the female doesn’t get fed up and kick her trilling troubadour to the curb, the pair will work together to raise their young, providing food in the form of seeds and insects while continually keeping an eye out for danger.

Because their nests are generally placed lower in trees or shrubs, and sometimes directly on the ground, song sparrows are vulnerable to many types of predators, including outdoor and feral cats. Other threats include egg predation by mice and shrews, and nest parasitism by brown-headed cowbirds-those roving rabble-rousers that leave their eggs in other birds’ nests.

Hazards aside, song sparrows are one of our area’s more successful bird species.

In fact, chances are good you’ve got at least a couple pair in your neighborhood. Look for a “typical” sparrow – brown in color, but with streaky breast markings that converge into at a central spot, the “tie tack” on the chest. And don’t forget to listen for that song.