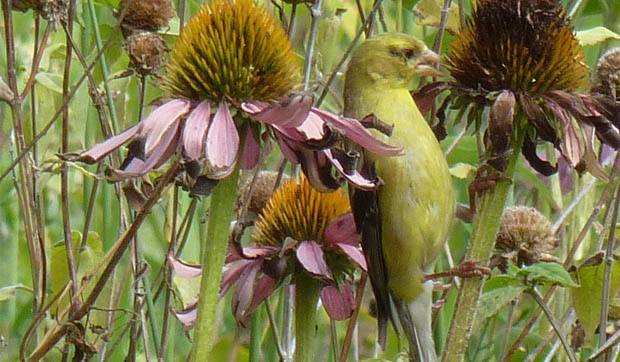 While her mate defends their territory, a female American goldfinch collects seed from purple coneflower. Although most songbirds in our area feed heavily on insects during the breeding season, goldfinches maintain their seed-eating ways year round.

Did you hear what I heard?

Every morning for the past week or so, as I’ve crawled out of bed to greet the day, a certain presence has met my ears. Unobtrusive yet persistent, it was hard to ignore.

It was the sound … of silence.

Oh sure, here in suburbia, things are never completely quiet. There’s always something clamoring about, be it cars driving by or airplanes flying overhead. Or that quintessential neighborhood noisemaker, the lawn mower, droning in the distance.

But the other sounds, the ones we’ve become accustomed to hearing at daybreak and before, are just plain gone. Done, over, finished, complete; packed up and put away until next spring.

We’re talking of course about the sounds of the birds. The American robin’s repetitive “Cheery-up, cheerio.” The northern cardinal’s “Birdy-birdy-birdy” (or, alternatively, “What-cheer, what-cheer, cheer, cheer”). The black-capped chickadee’s “Fee-bee” or, from some individuals, “Hi sweetie!”

It’s fun to imagine these birds singing away in happy reverie, thrilled to be up and about and ready to tackle whatever the day may bring.

But really, those songs of sweet cheer are essential components of the birds’ most all-encompassing pursuits: finding a mate, reproducing and defending the breeding territory. The sounds serve as a sign of the singer’s breeding fitness. They serve as a means of communication between a breeding pair.

They also often function as an auditory barrier to other birds, telling them in essence to “Back off! Scram! Beat it Bucko!” Or, in more polite terms, “Please move along. This space is taken. Have a nice day.” 🙂

That the songs occur most enthusiastically at dawn is no fluke. The air usually is still at this time of day, so sounds travel better. And because the sun has yet to creep fully above the horizon, lighting is poor and foraging is difficult. Besides, the insects that make up the bulk of most birds’ breeding-season diets, have yet to start their own activities of the day. (More on this later.)

Singing may sound like fun, but the responsibilities that come with it adds up to a lot of hard work.

Typically these burdens fall to the male of the species, who gives them his all, all day (or night, if he happens to be an owl or a nightjar. Or a killdeer. Those guys seem to vocalize 24/7.)

The male red-eyed vireo, a bird common in rich woods throughout our area, can repeat his song more than 20,000 times each day. The pugnacious house wren, a tireless defender of backyard nest boxes, can sing his complex symphony of trills, bubbles and churrs 10 times in a single minute.

Downy and hairy woodpeckers don’t have much of a voice, but they make up for this lack with an amazing set of adaptations. These birds can drum their bills against a tree (or siding or gutter) in bursts clocked at 25 beats per second, with no residual damage to their brain or skull.

If you live near water or wetlands you’re no doubt acquainted with the male red-winged blackbird’s “Conk-a-reee!” song, a territorial signal he often backs up with sneak attacks of startling, yet harmless, body slams from behind. But who can blame him? His job includes keeping watch over multiple nests, multiple mates and multiple offspring, making sure none of his redwing neighbors-or anything else red-encroaches on his turf.

Alas, all these early morning singing and drumming and dive-bombing activities have wound down to virtually nil. Just about the only birds still tasked with nestling-rearing are the American goldfinches, a species whose breeding cycle revolves around the availability of thistle and other plant down. This silky material, a near-perfect nest liner, isn’t available until June and July, a timing blip that makes goldfinches the latest-nesting native songbirds in our area.

If you’re lucky enough to have these guys in your neighborhood, you’re likely still hearing their elaborate compositions of twitters and warbles as well as their flight calls-a sound guaranteed to make you crave salty snacks: “Po-ta-to-chip, po-ta-to-chip!”

But without the other species singing their parts, the goldfinches become soloists. At least among the avian species.

Other groups of animals, meanwhile, are starting to make themselves known.  Once the sun climbs high enough to start warming the air-usually around 10a.m. or so–male cicadas start calling. If you listen closely throughout the day you can distinguish the differences in the sounds made by the different species.

But these fine fellows aren’t the only insect noisemakers. Throughout the day and into the evening, male crickets and grasshoppers are grating their rasps. And this past Tuesday night, for the first time this year, I heard male katydids calling from the trees of the Hickory Knolls Natural Area.

Many birds may have quieted down, but the air is still filled with whirrs, clicks, buzzes and chirps. We’re into August now, and these are the sounds…of summer.