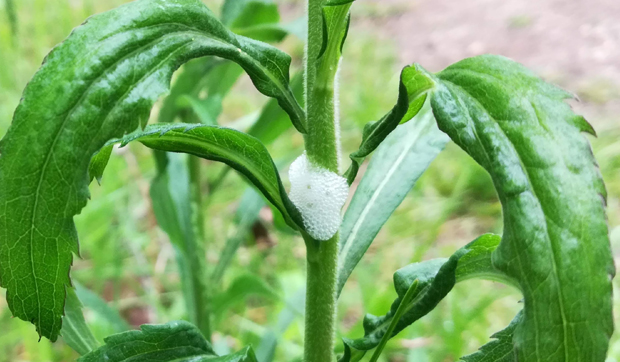 Photo Caption: Developing from eggs deposited last year in plant debris, spittlebug nymphs are making themselves at home on plants throughout the region.

We’ve all heard the saying, “Snug as a bug in a rug.” But this time of year I often find myself adding, “Some bugs are little and living in spittle.”

Not only is that little ditty proof that naturalists shouldn’t try to improve on age-old rhymes, it’s also confirmation that it’s spittlebug season once again.

Adult spittlebugs, also known as froghoppers, are the sort of insects that you could walk right by and never even notice. Measuring scarcely a quarter-inch, they’re cryptically colored in shades of brown or green. Their tendency to sit very still most of the time, on plants that are brown or green, makes them darn near invisible to the casual observer. And even if you do spot one, it will probably hop-like a frog-and disappear into the surrounding vegetation.

But young spittlebugs, or nymphs, are a completely different story. Encased in a frothy mass, a.k.a. spittle, the immature insects are hard to miss. Despite this obvious nature, many people still avert their eyes and stifle an “Eeww,” mistakenly believing that the foamy wad is–for lack of a better word–spit.

The good news is that it’s not spit at all. Rather, the bubbly concoction is produced as a result of the insect’s intriguing feeding habits.

Whereas many herbivorous insects slurp on plants’ phloem, or food-transport tissues, spittlebug nymphs feed from the xylem, the tissue that transports water and minerals. The diluted nature of the xylem’s liquid means the young bugs must consume it in large quantities. And large volumes going in mean, sooner or later, large volumes will be coming out.

In the spittlebugs’ case, that outflow occurs under pressure. As the expelled fluid, which contains sticky glandular secretions, leaves the nymph’s body, it begins to bubble. To foster this process, the baby bug often will bob its abdomen up and down – kind of like the whisking motion cooks use when frothing egg whites.

Like a miniature Rachael Ray whipping up tiny trifles, a spittlebug nymph can aerate its excretions as fast as 80 bubbles a minute. At that rate, it doesn’t take long to produce a gob of foam that, on the one hand, is a testament to the insect’s appetite and, on the other, is home sweet home.

That’s right. The nymphs live inside the bubbles. Which really, if you think about it, isn’t a bad arrangement. Fairly resilient, the sudsy structure protects the insect inside from rough weather and temperature extremes. Its humid interior helps protect the youngster from deadly desiccation. And its resemblance to spittle is just the thing to deter predators.

What the foam doesn’t deter is curious naturalists. If you come upon a spate of spittle – and you will if you head to a natural area, because 2021 appears to be a big year for spittlebugs – simply reach down and wipe off a blob with your finger. Peer into the bubbles and, before long, you’ll see a pair of red eyes peering back. They’ll be attached to a small, soft, greenish-yellow body: a spittlebug nymph, convinced its time is up. (Just to be sure it’s not, take care to tuck the little guy back safely in his bubbly bed.)

Be sure to look carefully, as larger blobs of spittle frequently host more than one nymph. The record, I believe, was a mass that measured more than 12 inches and held somewhere in the neighborhood of 100 little bugs, slurping and frothing and generally enjoying all the benefits that life amid bubbles allows.

Once you’ve found a spittlebug, or 100 spittlebugs (and if the latter is the case, by all means take a picture-and let me know!) you might find yourself wondering which species you’ve got. If that’s the case, the best I can do is wish you luck. North America is home to about 70 species; in fact the spittlebug superfamily Cercopoidea contains more than 2,500 species worldwide. Their colors and patterns vary widely, even within a species, and all of them are small bordering on teeny-tiny.

If however you do want to try and make a guess, play the odds and start with a species that’s extremely common: the meadow spittlebug. Introduced from Europe, Philaenus spumarius can be found on more than 400 different plant species throughout our area.

Check out the second half, or species, part of the insect’s scientific name. Spumarius is derived from the Latin spuma, which means foam or froth and alludes to the bug’s bubbly abode. It’s a root word you may have encountered before, especially if you’re familiar with a certain sort of sparkling wine.