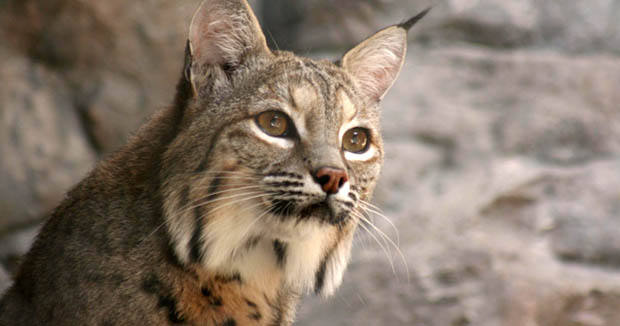 Photo Caption: This bobcat is displaying both its ruff–the puffed-out fur around the cheeks–and ear tufts. Depending on the cat’s frame of mind, as well as individual variances, these characteristics may or may not be visible. (Photo credit: Sgarton at MorgueFile.com)

Bobcats have been on my mind lately, and apparently lots of other folks too. I can barely keep track of how many responses we received over the past couple of weeks, ever since we asked whether anyone may have spotted one of these handsome yet elusive creatures.

Many Good Natured readers responded with their accounts of bobcat sightings in and around the TriCities.

The reports all shared certain similarities. The cats, except for one, were all described as long legged, tawny/yellow/brown in color, with prominent cheeks-the ruff we described last time-and a short tail.

The one exception to these descriptions was actually from an email I received last fall. A large cat bearing several of the appropriate features turned up dead in a yard in St. Charles Township. After extensive examination of the photos, we determined the deceased mammal wasn’t a bobcat but instead a more generic Bob the Cat.

Which again underscores the importance of noting the cat in question’s physical appearance. As we described a couple of weeks ago:  Male bobcats average about 22 lbs. while females are a little smaller, 20 lbs. or less. Length averages from 2.25 to 3.5 feet in length, including the tail. But the kicker, and possible ID clincher, is the height. Bobcats have longer legs than domestic cats and measure up to 2 feet high at the shoulder…sometimes. Individual variation is great among the species, and there’s always a chance of sighting an immature bobcat that hasn’t reached its full size. This species has a great deal of variability in size and markings.

Two other almost for-sure markings are white spots on the back of the cat’s black ears, and the species’ “bobbed” tail. Tails typically measure 4 to 6 in. in length but can grow as long as 10 in. in some individuals. Regardless, the tail is going to look shorter than it should when compared to body length.

The other trait, and one that for us suburbanites is just as important, is the site and context in which the cat is seen. These elusive creatures are becoming more used to human presence, but still aren’t comfortable enough with our brash ways to take up residence underneath a deck or backyard shed. They will, though, inhabit woodlands near neighborhoods, and they most definitely use streams as thoroughfares. In fact, looking for tracks in the soft mud along a creek or the Fox River is a great way to ascertain whether a bobcat has padded its way through the area.

Bobcat tracks are larger than domestic cat tracks, measuring about 1.75 inches across and from end to end. They give the impression of being round, as opposed to the squarish prints of dogs, coyotes and foxes. Also, because bobcats have retractable claws, you’ll rarely see claw marks; these only appear in very soft mud.

Time of day is another giveaway  when ascertaining whether you’re looking at a bobcat or a Bob the Cat. Although it’s possible to sight, for an instant, a bobcat in broad daylight, the majority of sightings occur around dawn and dusk or, if spotted in car headlights, at night. That’s what the literature says, and it’s what bobcat emailers have reported too.

If you, like me, would like to spot a bobcat, well, first of all, good luck! And please let me know if you have success. A photo would be much appreciated!

Short of that, immersing yourself in bobcat lore is another good tactic. A great source for information is the Illinois Bobcat Foundation. Their mission, in part, states “We believe that healthy bobcat populations are an important part our community and it is our goal to protect and promote awareness of their coexistence in our backyards, region, and throughout the State.” Follow them on Facebook at facebook.com/Illinois-Bobcat-Foundation-588754527870207