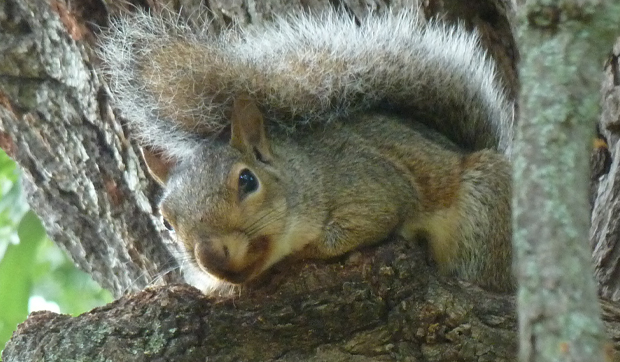 Photo Caption: It’s black walnut season, and squirrels everywhere are sporting walnut-eating grins. Pigments in the nuts’ husks create stains that range from deep yellow to dark brown, and last for days or even weeks.

We’ve all been there…

That awkward moment when you realize there’s a poppy seed from your morning muffin wedged between your two front teeth. Or that you’re wearing a milk moustache from your lunchtime latte. Or when you find–as I have, more times than I care to count-that you have chocolate frosting smeared, clown like, about your chin and cheeks.

All of these scenarios ran through my mind the other day as I strolled through the Native Plant Garden behind the Pottawatomie Community Center and saw, not one, but two young squirrels bearing evidence of their latest meal all over their cute little rodent faces.

As they looked down from the oak tree, clucking at either each other and maybe me, it was hard to miss their huge, walnut-eating grins.

Yep, it’s black walnut season again, and these two Sciurus carolinensis were not going to miss a minute of it.

Judging by the quantity of husks I saw on a nearby picnic table, the little gray squirrels had had quite a feast. In fact, the pile was so large, I really couldn’t picture anyone else-anyone human, that is-wanting to eat there. I’d actually tried to clean it up a bit, using a handful of catalpa pods to sweep the bulk of the mass out onto the grass. I got most of the nut “crumbs” cleaned up, but there wasn’t much I could do about the stains they left behind.

If you’ve ever lived near a black walnut tree, or have harvested its fruit, you’re familiar with the staining that occurs when the husks are split. Maybe you’ve seen it on your sidewalk, if your tree is located next to a walkway. Or on your shoes if you’ve tromped beneath a black walnut’s spreading boughs. Or on your hands (more on this later).

Juglans nigra possesses an impressive array of pigments, including its namesake juglone, which can be used as a fabric dye as well as a natural coloring agent in foods and cosmetics;  plumbagin, a yellow dye once used on the hair and skin; and tannins, which act to set the dyes and make sure they never, ever go away.

Well, at least it seems that way. Black walnut stains do fade over time, from dark brown to orange to golden yellow. But when those fading stains are on your (my) fingers, because you (I) foolishly decided to remove the husks without wearing gloves, it really does seem like they’re going to last forever.

I know this. Here’s why…

Last year’s walnut crop was impressive, and the part of me that likes to occasionally forage wild foods thought it would be fun to gather some of the bounty for holiday baking. Let me tell you, the gathering was the easy part. Opening the shells was anything but. As I progressed from channel-lock pliers to hammer to a benchtop-mounted vise I realized why black walnuts command a price two to three times higher than their English walnut counterparts. And my fingers? Even though I knew better, I still peeled the husks from about a half dozen nuts before putting on gloves; in the days that followed, my digits gradually lightened from brown to yellow. And positively no one complimented me on my dark brown nails, which I ended up cutting off to remove the last traces of my folly.

Amongst wildlife, the walnut-stain phenomenon is fairly unique to squirrels. Few other of our wild neighbors dare to bite through those thick husks to partake of the deliciousness within. Sure, mice and chipmunks might gnaw on the nutshells once the husks are gone, but it’s primarily squirrels-both the gray and the fox (Sciurus niger)-that have the determination to conquer the husks, as well as the dentition and jaw strength needed to chip away at those infamously tough shells.

The squirrels at Pottawatomie will probably bear the marks of their walnut meal for at least a week or two. In fact, with black walnut season in full swing, the pair are likely to indulge several more times before winter sets in. Which means their faces will stay stained for some time to come.

You might have walnut-eating rodents in your neck of the woods too. The next time you see a squirrel, look for abnormally dark coloration around the mouth. If the staining is deep, you might at first think the squirrel is injured. (I know I did when I saw this phenomenon for the first time.) But if you can get a closer look, with binoculars or the zoom feature on a camera, you’ll see that the coloration isn’t a sore, or dried blood. It’s just fur, dyed brown.

When you think about it, a walnut-eating grin isn’t really much different from a milk moustache or a face smeared with chocolate. Man or beast, we’ve all been there.