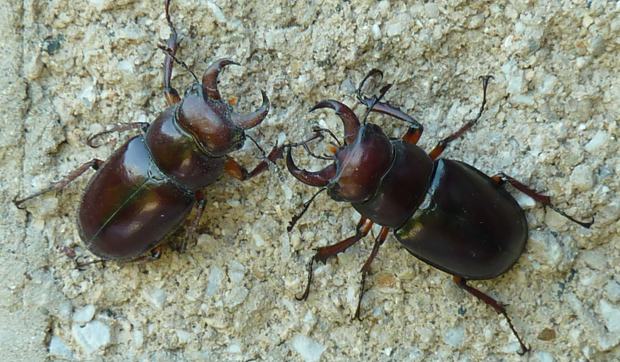 Two male stag beetles face off over breeding territory. But those big mandibles? They’re mostly for show. It’s the smaller pinchers of the female stag beetle (not pictured) that really pack a punch.

The heady aroma of fine cigars. The rise and fall of male voices, punctuated with deep, booming laughter. It didn’t take a girl popping out of a cake to tell us, a stag party was underway in the pavilion of the Hickory Knolls Natural Area.

Meanwhile, a stone’s throw away at the Discovery Center, another gathering of stags was in full swing: the Lucanidae, or stag beetles, had come out to play.

Stag beetles are the sorts of insects that are hard to miss. For one thing, their chunky bodies are an inch or more in length-pretty big, by temperate climate standards. For another, the males have prominent mandibles, branched structures that resemble deer antlers; hence the “stag” part of their name.

These large jaws also are responsible for the critter’s other common name, “pinching bug,” even though their large size renders them pretty ineffective at anything other than wrestling with other males. (Interestingly, the females’ smaller but considerably stronger mouthparts can pinch like the dickens.)

The species we have in our area belong to the genus Lucanus, a name that can be traced back to the ancient Italian region of Lucania. Lucanians, the story goes, used stag beetles as amulets, and the name stuck. Species names, like capreolus, our area’s most common stag, are from Greek words for various types of deer and elk.

Indeed, with roles in courtship battles as well as displays to prospective mates, the antler-like mandibles are a big part of the adult stag beetles’ life. But, as is the case with most insects, the adult chapter of the beetles’ life actually is a very small part of a much bigger story.

Stag beetles spend the majority of their lives in an immature, or larval, stage–two years, for the stags in our area, and four to six years for species in other parts of the world– a stark contrast to the month or two that adults may survive.

Stag beetle larvae, known as grubs, live out their days in rotting wood, chewing and digesting (with the aid of special bacteria in their hind gut) cellulose and helping advance a fallen tree’s decomposition. (Note: Stag beetle larvae are large-about the size of a child’s thumb–and do not eat living plant material. If you’re finding small grubs in your lawn, they likely are the larvae of a much less welcome species, the Japanese beetle.)

Now, as humans, we’ve probably experienced this phenomenon more times than any of us care to remember. The garrulous relative you were paired with at wedding reception; that obnoxious person your colleagues ditched on you at a business function…we’ve all been there.

But stag beetles, believe it or not, are way neater. Far from spewing crumbs while their mouths are full, the larvae instead use a means of communication known as stridulation-rubbing one body part against another to make sound.

Crickets rubbing wings together to produce their characteristic chirps is perhaps the best-known form of stridulation; grasshoppers rubbing legs against wings is probably a close second.

On stag beetle larvae, the sound is produced when claws on the hind legs are rubbed against ridges on the middle pair of legs.  Why these larvae stridulate is unclear, but the action surely has a purpose; many other beetle larvae are known to make sounds too. Perhaps the vibrations help the larva lay claim to a territory. There’s even speculation that the communication may be inter-specific.

Regardless of purpose, it’s just one more example of the vast network of unknowns lying at, and just beneath, our feet.

Worldwide, stag beetles are facing a bit of a crisis; many European countries now include them on lists of protected species. Land-management practices that favor the removal of dead wood have taken away the habitat these beetles need to survive. Without them, or specifically their larva, essential cycling of nutrients that needs to occur in order for soil to remain fertile comes to a grinding halt.

If you’re a gardener, or know someone who is, you can help conserve this helpful species by promoting the use of stag beetle-friendly landscaping practices: Leave tree stumps and logs to decay naturally; avoid the use of landscape cloth, which can trap newly transformed adult beetles and block their emergence from the soil; and minimize the use of insecticides.

Even if everyone around you is getting rid of dead wood and spraying pesticide like there’s no tomorrow, you have an opportunity to buck the trend and branch off on your own. There’s no harm in going stag!