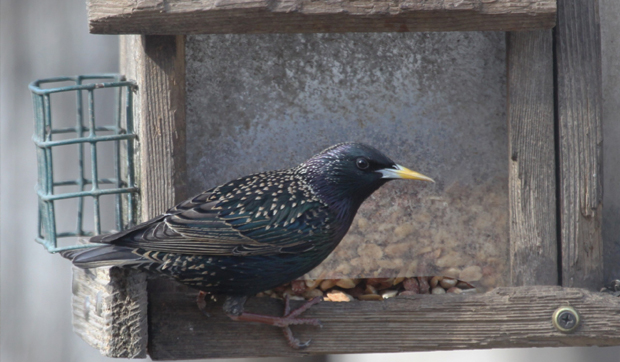 Imported to the United States more than 100 years ago, European starlings have made themselves at home in every one of the lower 48 states as well as southern Alaska and Canada. (Photo courtesy of Bob Andrini.)

Depending on how your holiday season is playing out, you may have, in the past few days, found a certain classic Saturday Night Live skit playing on continuous loop in your brain.

“The Thing That Wouldn’t Leave” was a 50-second bit that starred John Belushi as a houseguest who snarfed chips, invited friends over and made a “long-distance call” (okay, this was a few years ago) all the while belching smoke from a large cigar. As the helpless host, Bill Murray kept dropping hints about how late it was, how he had to get up early the next morning, etc. Meanwhile, every time Belushi made another pronouncement, like “I’m thirsty, is there anything in the fridge?” Jane Curtin, the wife and hostess, would let out a bloodcurdling scream. Funny stuff, it was, and a great caricature of a situation familiar to us all.

At Casa Otto, we’ve been blessedly guest-free these past few weeks. But James O. Breen Park in St. Charles hasn’t been so lucky. Hundreds of European starlings, Sturnus vulgaris, have adopted it as a foraging spot and day roost, picking at the ground for food and then resting on utility wires, goal post crossbars and other convenient horizontal surfaces.

As quintessential “guests that wouldn’t leave,” the starlings have become a fixture in the park, causing those of us who work there to speculate on when, or even if, they are ever going to leave.

We are not alone.

European starlings actually wore out their welcome here in the United States several decades ago. “Invited” or, in ecology terms, introduced, in 1890 in New York’s Central Park, the first birds were part of a program initiated by a group known as the American Acclimatization Society. As Shakespeare aficionados, these folks thought it a fine goal to import examples of all bird species The Bard mentioned in his various works.

Many of these attempts failed, but starlings (and, incidentally, house sparrows) eventually attained success. Aided by humans’ agriculture and urbanization activities, the birds found ideal habitat at almost every turn. By 1950, they had reached the West Coast and Mexico; today, their North American numbers are estimated at upwards of 200 million.

(I know, their rapid colonization in many ways parallels that of other introduced species-namely the settlers so many of us are descended from. While a wonderful discussion topic, there’s neither time nor space to take it on here. If you’d like, though, you could broach it with friends and family over a cup, or punchbowl, of egg nog. You might even want to take it up with your own Thing That Wouldn’t Leave, in hopes that s/he just might.)

At any rate, today starlings present us with a mixed bag of habits that, at their best, help keep insect populations in check, but simultaneously have resulted in huge agricultural losses as well as undue pressure on various native bird species.

Gifted with an unusual jaw musculature, which works to spring the starling’s bill open as opposed to clamping it shut, the birds are able to poke and pry into soil and remove all manner of invertebrate prey. While they have been credited with helping to control both damaging crane fly and Japanese beetle larvae, they consume helpful species too, including spiders.

Starlings have a taste for berries, both wild and cultivated; they also avail themselves of free handouts at birdfeeders, eating seeds as well as suet. On farms, the birds help themselves to grain fields and cattle feed, leaving excrement, bacteria and parasites in their wake; USDA statistics indicate that starling control measures combined with losses add up to an astounding $800 million annually.

Whether they are helping or harming, the birds are certainly numerous-and that’s what has me most concerned. The flock (or flocks, since I don’t know whether I’m seeing the same group or different ones each day) seem to consist of at least a couple hundred birds at a time. Any vertebrate present in that quantity will certainly put a strain on available resources-primarily, food and shelter. The more food the starlings consume, and the more territory these aggressive birds occupy, the less that will be available for native species.

At Hickory Knolls, our dedicated volunteer Mike Swanson has gone to great lengths to make sure starlings do not displace the purple martin colony he has worked to establish. His houses now include special crescent-shaped Starling Resistant Entrance Holes that keep S. vulgaris, which has longer legs and a thicker body than Progne subis,  the purple martin, from entering the structures and attacking and killing adults and offspring.

Meanwhile, though, I can’t but wonder if the efforts of Mike and others like him are being offset by what I see as a design flaw in one of the most ubiquitous structures in our suburban landscape: the light pole. Each spring and summer, I see starlings disappearing inside of poles that hold up both street lights and traffic lights. Shoot, we even had a starling nest inside a pole in the parking lot of Hickory Knolls.

Whether this phenomenon is a result of caps that have blown off, or whether the caps are nonexistent, I don’t know. But it does seem like starlings have found that the holes in these virtually predator-proof poles make excellent cavities for rearing young. If you figure an average clutch size of four eggs, and multiply that by the number of metal light poles in our area…well, the figures become staggering in no time.

They might not be smoking cigars in our living rooms, nor raiding our refrigerators, but European starlings have found plenty of ways to make themselves at home. Try as we might to get them to move along, they are The Things That Wouldn’t Leave.