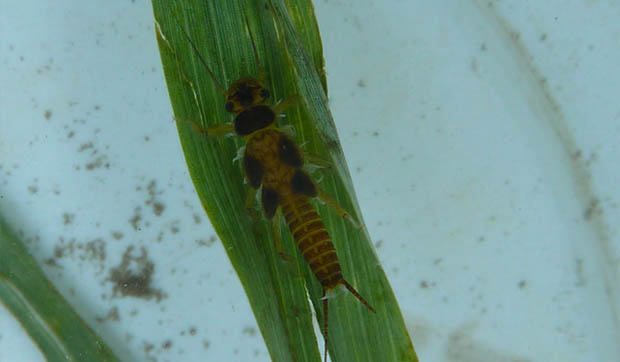 Photo Caption: Stoneflies, even the common species, are increasingly hard to find these days. This juvenile, also called a nymph, was found underneath a rock in Ferson Creek at LeRoy Oakes Forest Preserve in St. Charles.

(Ed. Note: This column is the last of a three-part series on the Fox River’s famous, or perhaps infamous, ‘River bugs.’)

It may seem, at first glance, that our Fox River bugs are a pretty homogenous bunch.

I mean, really, how different could they be? Head, thorax, abdomen…two antennae, six legs, wings… Glanced from the windows of passing cars, or even up close and personal on a windshield or radiator grill, these often-plentiful insects all appear to share a certain sameness.

But talk to a naturalist, fisherman or anyone else passionate about streams and aquatic ecosystems, and you’ll quickly learn that the various groups of River bugs are as diverse as ecological niches they occupy.

The Trichoptera, or caddisflies, are notable for their fanciful larval cases, their hairy little wings, and their tendency to form dense mating swarms that weirdly coincide with river town street festivals.

The Ephemeroptera, or mayflies, are famous for their short adult lives and, in some circles, their gorgeous colors, lacy wings and long, flowing “tails.”

And then we have the Plecoptera, or stoneflies. When outdoor enthusiasts speak of these River bugs-and we do, a lot-the conversation takes on a completely different tone. Voices hush, and faces take on a look of awed reverence. For stoneflies are the Holy Grail of all River bug-dom.

Like caddis and mayflies, stonefly juveniles, or nymphs, are aquatic. But unlike their underwater neighbors, most of which are tolerant of small amounts of impurities, stoneflies are exceedingly persnickety about their environment. They need cool, well-oxygenated water with a rocky, unsilted substrate-habitat that’s hard to find in developed areas. As a consequence, stoneflies are at the present time a rarity here in the TriCities.

So you can imagine my surprise when, just the other day, our St. Charles Park District nature camp kids discovered a stonefly nymph in Ferson Creek at the LeRoy Oakes Forest Preserve.

Talk about a reason to celebrate. Miss Pam was jubilant indeed! I tried, futilely, to contain my glee as we examined the inch-long creature that we kept, briefly, in a white collection cup.

With more than 650 species in nine families in North America alone (3,400 species worldwide) I wasn’t about to hazard a guess as to which group this individual belongs. But all the classic stonefly hallmarks were there. Two tails, or cerci, two claws on each foot, and two sets of wing pads, along with branched, filamentous gills poking out from beneath the thorax.

Later on, looking at the pictures we’d taken streamside, I thumbed through a few references and was quickly reminded of how aquatic entomologists, to me anyway, seem slightly masochistic. So many species, so many tiny parts…

Paging through options I decided that, if I had to make a guess, the Ferson Creek stonefly may be a member of the Perlidae, a family also known as the common or summer stoneflies. Since I savor my sanity, that’s how far that i.d. will go. And even at that it’s still a guess, a very tenuous one at that.

Regardless of identity, this little guy without a doubt belongs to a group of insects whose roots date back to the Permian period, some 250 million years ago. Primitive in appearance (that is, no showy swag like wing scales or hairs) stoneflies are strong climbers but weak fliers. Populations are localized and tend to remain that way for eons.

While you won’t see stoneflies forming dense mating clusters the way various other River bugs do, these species have developed rituals that, I dare say, are even cooler: They drum.

Now, we’re not talking Buddy Rich or John Bonham-style percussion here. Stonefly drumming is a subtle thing; it has to be. Even giant stoneflies, the largest North American species, measure a scant 40 millimeters, or about an inch and a half, at maturity. If you’re not a stonefly, you’ll need special equipment to hear the sound. But it’s drumming nonetheless, a behavior that, as one scientist puts it, “improves the efficiency of mate-finding in an otherwise silent, drab, relatively sedentary insect.”

Male stoneflies are the ones that begin the performance, tapping their abdomens against a surface, such as a log, in a species-specific pattern. Female stoneflies then indicate their interest by drumming back in a simplified response pattern.

If all goes well, mating occurs, females deposit their eggs and the cycle begins again.

Fingers crossed, there will be lots of drumming along Ferson Creek this year. Stoneflies a few years back were awarded the dubious distinction of “highly imperiled” by aquatic entomologists R. Edward DeWalt, Colin Favret and Donald W. Webb of the Illinois Natural History Survey’s Center for Biodiversity. Decades of habitat modifications, including dams, drain tiles, stream channelization and development have made things tough for Illinois’ plecopterans.

Interestingly, the stretch of Ferson where the nature campers found their stonefly is just downstream from a recent dam removal. Water now tumbles over boulders that had once impeded the creek’s flow, creating a rush of clear, cool, well-oxygenated water.

I remember making a similar stonefly discovery in the Fox River at Glenwood Park Forest Preserve, shortly after the south Batavia dam had been removed. This location, where aquatic species diversity has measurably improved, is also a favorite hangout of another species once considered imperiled-the bald eagle.

Stoneflies may not be as iconic as our nation’s symbol, but they’re no less important members of our Fox River watershed. With continued attention to habitat improvement, including dam modifications and stream re-meandering, there could come a day when stoneflies lose their Holy Grail status.

Wouldn’t it be great if they were just another River bug?