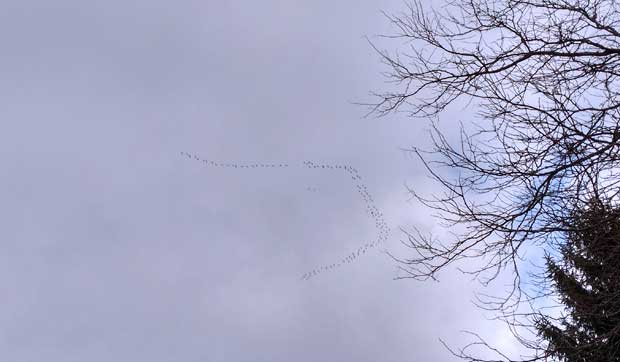 Photo Caption: Those tiny specks flying in V formation actually are a flock of sandhill cranes migrating. This time of year, to find sandhill cranes, all you have to do is stop, look and listen.

A while back, someone showed me a Facebook quiz titled Which Dr. Seuss Character Are You?

Maybe you’re familiar with these sorts of games—timewasters, really—that purport to tell you things like what breed of dog or cat you are, which Friends character is your soulmate, even major life decisions like career choice, what city you’re suited to and whether or not you should own a fish.

I’ll admit, I did get suckered into the Friends test (I’m a Joey), but the Dr. Seuss quiz I knew was completely unnecessary. Why? Because I already knew the answer.

I’m Horton, the elephant who hears a Who. And I’ll bet, if you’re into nature, you are too. Which is not to say any of us is elephantine—although, personally, I’m way more pachyderm-like than, say, gazelle—but rather to say we hear things other people don’t.

In the Seuss book, Horton is ridiculed for saying he hears the voices of Whos—tiny little people whose entire town of Whoville exists on a speck of dust.

In our work at the park district, I’ve been challenged prove that bats and certain crickets, grasshoppers and katydids, actually make noise. They do! But some of the sounds are ultrasonic, which means they’re too high for us to hear. The proof comes courtesy of a nifty device called a Listen Up! detector, which takes those high-frequency sounds and lowers them to a range that human ears can hear.

Thanks to the internet, we’ve also been able to offer proof that some spider species drum to communicate. And thanks to woodpeckers, we’ve been able to show that beetle larvae make a noise when chewing on wood that sounds remarkably like the ticking of an old-fashioned wall clock. (Have a problem with woodpeckers foraging on your wood-sided house? If you’ve got a tick-tock clock mounted on a wall that abuts the outside, try moving it to an interior location. Chances are your woodpecker issues will move away too.)

But my most Horton-like experience came a few years ago, during a field trip at Delnor Woods. We were studying forest ecology, reveling in all the tree-mendous learning opportunities that park has to offer, when we were fortuitously granted a fabulous teachable moment.

Faintly—ever so faintly—the rattling bugle calls of a flock of sandhill cranes drifted around us. Rather than continue with the teaching plan, which called for a game highlighting forest food chains, I called a timeout and asked the fourth graders and their adult chaperones to stop, look and listen to the musical lilt floating down from an altitude of about 3,000 feet.

Fifteen kids, two moms and a teacher obliged, but one dad immediately assumed a skeptical pose. Arms crossed, one brow arched, he emphatically stated that I couldn’t possibly know what kind of birds those are. “They’re way too high in the sky!” he exclaimed.

What ensued from there was a discussion about bird ID, specifically birding by ear. Even tiny dots in the sky—dots about the size of Horton’s speck of dust—can be identified if you just know to stop and listen.

This point was accentuated a couple of weeks ago during a Learn from the Experts program we presented at Hickory Knolls. The topic was sandhill cranes and Valerie Blaine, nature programs manager at the Forest Preserve District of Kane County, had assembled a magnificent slideshow depicting sandhills foraging, sandhills nesting, sandhills raising young and sandhills migrating.

The presentation also included a photo of a V-shaped flock of tiny specks in the sky, followed by a lovely shot of a clear blue sky. Yes, Valerie stated, even at 5,000 feet, the upper range of sandhill crane migration altitude, you can still hear the birds contact calls. Especially if you crane, har, your neck.

March and early April are prime times to spot the specks of migrating sandhills high in the sky. And even though you might not be able to see them very well you can, like Horton, hear them. Also like Horton, you’ll know What—even Who—it is.