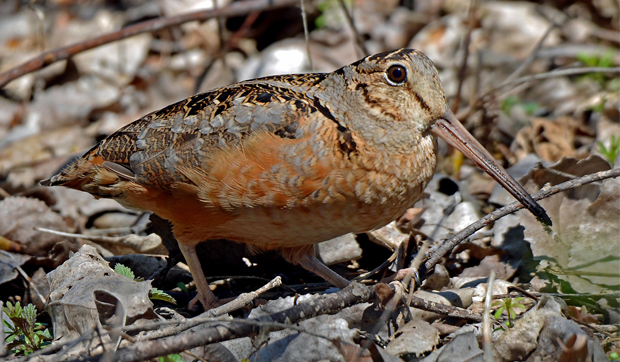 Thursday evening it was business as usual at Hickory Knolls. I was heading out toward the picnic shelter to set up for a campfire and night hike, carrying the usual gear – skewers for roasting marshmallows, a lighter and some backup matches, some newspapers and bucket of water.

I was wearing my usual late-winter garb – hat, coat, gloves, boots – and was hustling a bit because, also as usual, I should’ve left the building just a few minutes sooner.

I was chugging along, doing my graceless best to balance the 18 3-ft. skewers and keep the newspaper from dipping into the bucket, when my brain told my feet to stop. Only after a few puzzling seconds did I realize why.

A noise, faint and intermittent, was coming from the wet fields that surrounded me. As my ears strained to hear the sound, my mind flipped through a virtual Rolodex of possibilities. An insect? Nah, too early. A frog? Possibly, although the sound I thought I’d heard didn’t really match any of the species we have in our area.

Just when I thought maybe I’d been mistaken, and that the mystery noise may only have been my coat rustling against the newspaper, I heard it again, louder and more distinct. And at that moment I knew: The next several minutes would be anything but usual, for the woodcocks had returned to Kane County.

The male American woodcock is one of the most celebrated suitors in avian behavioral research, as well as natural history literature in general. An overachiever, to say the least, this little guy makes our local songbirds – many of which sing their hearts out as they woo potential mates – look like total slackers.

Torn between a sense of duty – the kids would be coming out for their hike and s’mores-fest in less than 30 minutes – and a desire to witness a storied spring ritual, I chose to do what any hardcore nature nerd would: take in the woodcock show and hope my fire-making skills wouldn’t let me down later.

It soon became clear, I made the right choice. The birds’ nasal calls, a one-note “Peent!” repeated about every 15 seconds, continued on for another five minutes or so from at least three different spots in the tall grasses.

At this point, the skewers were a jumbled mass on top of the bucket, the newspapers in a heap on the ground. I still had work to do, and time was growing short. But I wasn’t about to miss the best part of the performance – the aerial display immortalized by Aldo Leopold in his “Sky Dance” essay in A Sand County Almanac:

“…the bird flutters skyward in a series of wide spirals, emitting a musical twitter. Up and up he goes, the spirals steeper and smaller, the twittering louder and louder, until the performer is only a speck in the sky. Then, without warning, he tumbles like a crippled plane, giving voice in a soft liquid warble that a March bluebird might envy. At a few feet from the ground he levels off and returns to his peenting ground, usually to the exact spot where the performance began, and there resumes his peenting.”

A Leopold fan myself, I recited a few of the sentences along with the performance, garbling some of the words but getting the gist of it, in my head. Exhilarated, I waited for more.

But then … nothing. As quickly as they’d begun their exhibition, the birds grew silent.

Was there a predator nearby? Did I make some kind of noise or movement the boys found threatening? We’ll probably never know for sure.

One thing was certain. It was time for me to get a move on and get that fire built. As I scuttled off toward the picnic shelter, following my usual path and juggling supplies in my usual fashion, I made a mental note to come back to the field again soon, maybe even this weekend, to listen and watch the woodcocks’ performance – a most unusual display.

Note: This column first ran on March 4, 2012 but history repeated itself two weeks ago with one interesting twist: In addition to the wet fields, which had recently burned and were black and sooty, the birds could also be heard calling from the manicured turfgrass of the James O. Breen Park soccer fields. Maybe some woodcocks don’t like to get their feet and feathers dirty?