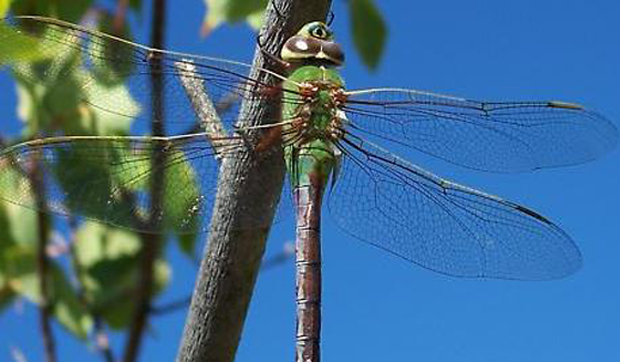 A female green darner rests in a characteristic pose. The “bullseye” mark at the front of the head is another way to identify this iconic dragonfly species.

I got together with some friends the other night, and after a while the conversation turned to superheroes and, eventually, the movie Green Lantern. Now, I don’t follow sci-fi or comic-book flicks that much, so while my pals debated the merits of the movie’s plot and special effects, and the Green Lantern’s ability to save the universe, or whatever, I let my thoughts drift to another superhero, this one more local in nature: the Green Darner.

The largest of our area’s dragonflies, green darners seem to be everywhere right now. I’ve noticed them in all the places you’d expect to see such insects-along the Fox River, for instance, and circling above the pond at Delnor Woods Park in St. Charles.  But I’ve also seen them hovering in parking lots and ball fields, zipping along streets and sidewalks, and even, regrettably, smacked flat on the grill of my car.

Yes indeed, these big guys certainly are everywhere these days, and with good reason. Like other dragonflies, green darners are insectivores-they eat other bugs. And, as you may have noticed, bugs of all types are in abundance right now.

Cruising through the air like a fighter pilot on a mission, albeit with wings the length of popsicle sticks, a hungry green darner will pursue just about any insect that flies. Mosquitoes, thank goodness, are high on the list, but green darners will also go after flies, butterflies, even other dragonflies. In fact, in one much-cited incident, a green darner on the East Coast took down a ruby-throated hummingbird. (But talk about bad timing…for the dragonfly, that is. The attack occurred right in front of a bunch of birdwatchers, who rushed to the aid of the hummingbird and scared the darner away.)

While that story is probably true, many other  grandiose tales surrounding darners, and dragonflies in general, are not. Despite everything your grandmother may have told you, dragonflies are neither current nor past associates of the devil. They don’t carry disease and they don’t attack humans. They can’t sting and they don’t bite.

What they can do, though, is amaze you with their antics in flight. They can fly forwards and backwards, and when chasing after a prey item (or another dragonfly impinging on a territory) they can reach speeds of more than 35 miles per hour.

Even more remarkable, they can keep up these performances for weeks on end. Unlike many adult insects, which do not feed and therefore don’t last more than a week or two, an adult green darner can live as long as two or three months.

And while that in itself is impressive, also consider that that same insect may have spent as many as five years as a juvenile, living in water and breathing thru gills. In this stage the young darner, known as a nymph, masters the predatory skills it will retain into adulthood. The only difference is that there are no wings involved and the hunting grounds are underwater.

Green darner nymphs eat their share of mosquito larvae, as well as other aquatic insects. As they grow, they will also take on young crayfish, fish and tadpoles too.

The key to their hunting prowess lies in a secret weapon-a protrusible labium, or lower mouthpart. This jaw-like structure, equipped with two sharp spines, shoots out and nabs whatever hapless prey that comes within range. (Remember the alien in the movie Alien? Remember the body part that would shoot out and grab people? Supposedly that stunning feature was inspired by the lower jaw of a baby dragonfly.)

Green darner nymphs hang out in the muck and mud at the bottom of ponds, marshes and slow-moving streams. To find them you’ll probably need a net, and maybe a little patience.

But if you’d like to catch a glimpse of an adult green darner, all you have to do is keep your eyes open when you’re outside.

As their name suggests, green darners appear green as they zip past. But if you’re lucky enough to find one at rest you’ll notice its long, darning needle-like abdomen is either bluish (if it’s a male) or brownish (if it’s a female).

If you see a bluish one flying in wide circles near a body of water, it’s a male protecting its territory. If you see a brownish one sticking its abdomen into the water, it’s a female laying eggs. And if you happen to see a bluish one and a brownish one hooked together, well, then, rest assured, there will be a sequel to this current generation. Green Darner II will be coming soon to a neighborhood near you.

Pam Erickson Otto watches way more dragonflies than movies. She is also the manager of nature programs and interpretive services at the Hickory Knolls Discovery Center, a facility of the St. Charles Park District. She can be reached at 630-513-4346 or potto@stcparks.org.