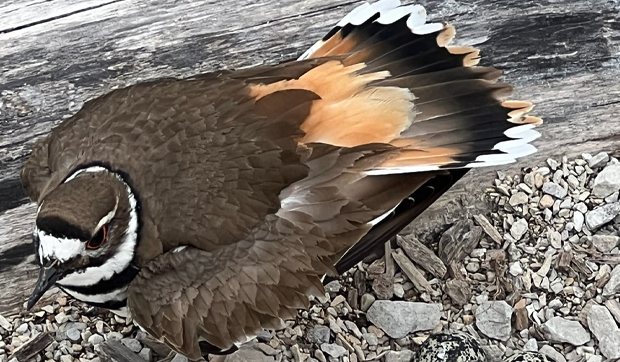 A killdeer warns a potential threat away from her nest by displaying the orange bands on her tail. She as well as her mate will escalate this distractive behavior to a dramatic broken-wing display to draw away the danger and protect their offspring.

What with the Oscars still in recent memory, and Mother’s Day just over a week away, today seems like a great time to celebrate Amazing Mom Performances. Remember Katharine Hepburn in Guess Who’s Coming to Dinner? Olympia Dukakis in Moonstruck? Sally Field in Places in the Heart?

Yeah, well, this being a Good Natured column, we’re not going to talk about them. Not right now, anyway.

Nope, what I’ve been thinking about lately are the amazing performances that occur every breeding season in the great outdoors. You don’t have to look too far to find some outstanding examples of animal moms delivering true life-or-death behavioral displays, all in the name of protecting their young.

The nominees for this year’s Amazing Moms include the female nursery-web spider, which carries her egg sac in her mouthparts, foregoing food, then uses her imposing size to protect her brood within a tangled silken cradle; the female wolf spider, which lugs her egg sac on her behind, then carries her young on her back; the female red squirrel, a documented ventriloquist-one who literally throws her voice and mimics the cries of her young as she leads intruders away from her nest; and the female killdeer, whose “broken wing” distraction displays draw potential predators away from her growing family.

(Disclaimer No. 1: If this was a Good Natured dissertation and we had unlimited space to explore this concept of Amazing Moms, I’d include nominees from around the country and around the world. But since we’re limited on space and our readership is local, I’m just going to focus on those candidates that are nearby and relatively easy to see.)

(Disclaimer No. 2: I in no way mean to imply disrespect for those wild moms who provide little or no parental care, or do so in undramatic fashion. You do you!)

(Disclaimer No. 3: The judges, er, judge, made the difficult decision to eliminate the mourning dove, a very common and easily observable species, from this competition. While the species is known to perform various acts to distract potential predators, not every mom, or dad, is endowed with this dramatic defensive trait.)

And the winner is…Ding! The killdeer, Charadrius vociferus!

(Criminy Pete, there’s a Disclaimer No. 4: The majority of killdeer broods are cared for by both parents. But in some instances, only Mom incubates the eggs. So, in keeping with today’s them, the judges, er, judge, has decided to bestow this prestigious award to all females of the species and defer accolades for dads to a later date.)

For the past few weeks the staff and visitors to the Hickory Knolls Discovery Center have been privileged to watch a killdeer family in the making, right outside the building in our nature play area. Although designed for human children, the playground, with its rocks, logs, wood chips and gravel, actually offers prime habitat for ground-nesting birds-especially if they can tolerate frequent bursts of activity during outings by the respectful Hickory Knolls preschoolers and other guests.

The killdeer nest is in a gravel pathway, tucked up against a log. Even though you’d think a bird the size of a killdeer (slightly larger than an American robin, and with longer legs) would be hard to miss, the brownish plumage of the incubating bird matches the brownish hue of the log. Plus the slight depression of the nest area lowers the bird’s profile and makes it very inconspicuous.

That is, until danger is sensed.

That’s when these birds-and, again, for the purposes of today’s column, let’s say it’s the female-launches into full-blown, family protection mode. She first flairs her tail, which exposes the orange feathers on her rump and upper tail coverts.

If the shock of that burst of color doesn’t deter the intruder, she steps up her performance to include-to this judge’s eye, anyway, a most convincing depiction of an injured bird pitifully dragging a broken wing. Farther and farther from the nest she’ll go, drawing the would-be threat away from the eggs or, if farther along in the reproductive cycle, the developing young.

Our Hickory Knolls killdeer has stayed on her nest through snow and rain (and heat and gloom of night). Well, mostly. You see this avian thespian has been aided in the completion of her appointed rounds by the one and only Papa Killdeer.

In his supporting role he patrols the area from a distance, sounding an alarm of sharp “Dee!” notes and, sometimes, nervous trills if it seems like danger is near. Should a situation escalate, he too can and will perform the broken wing display.

The killdeer and their now award-winning performances currently are appearing in gravelly areas everywhere…for limited engagements only. Killdeer young are precocial, which means they are born with eyes open and possess the ability to walk. They leave the nest within a few hours of hatching, and follow their parents to areas of tall vegetation where they can more easily hide from predators and other threats.

Should you witness their theatrics, consider yourself lucky. But please don’t whistle or applaud or otherwise seem menacing. This is one amazing performance that doesn’t deserve an encore.