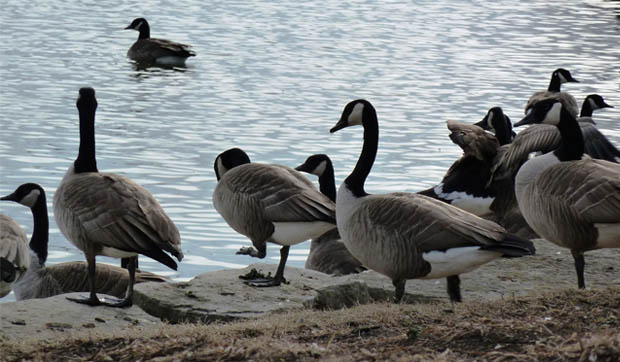 Photo Caption: Do you speak naturalist? Here’s a test: What do you call these birds, Canada geese or Canadian geese? Hint: You may need to check their passports.

If you’ve spent much time with a naturalist, you’ve likely noticed that we tend to live in our own little world. It’s a place where time stops when a rare bird flies overhead, or an unusual insect appears underfoot.

And where the people speak a different language.

OK, so maybe it’s not all that different. The words we choose are common, everyday English (well, except for scientific binomials). It’s just that we just tend to use them in different ways.

Take the word seagull, for instance. It’s one you’ll rarely, if ever, hear a naturalist say. Instead, we’ll say gull, in reference to the fact that many species occur far away from any sea.

It’s the same with the word buffalo. Sure, we’ll use it to refer to Buffalo Bill, buffalo nickels and buffalo grass (Buchloe dactyloides) but if we’re talking about the shaggy mammal that’s an icon of the American West, we’ll say bison. The “true buffalo” species live in Asia and Africa; they lack the heavy fur and prominent hump of our North American beasts. Plus, the scientific name for the American bison is Bison bison. What more proof do you need?

Now let’s talk geese. When a naturalist speaks of the species we have in abundance in our area, he or she will use the phrase Canada geese, instead of Canadian geese. Canada goose is the most widely accepted common name for this species, Branta canadensis, and is the one cited in field guides. However, if a specific Canada goose were to fly down here from, say, Winnipeg, you could accurately describe it as a Canadian Canada goose… but only after examining its passport.

The list goes on. How many times have you heard someone in this area say they got into poison oak? Unlike American buffalo and Canadian geese, poison oak is an actual species – Toxicodendron (Rhus) diversilobum. But it doesn’t grow in Illinois. Instead we have poison ivy, T. radicans.

Both types of plants produce urushiol, the oil that causes an allergic reaction in two-thirds of the human population, and both have leaflets that grow in groups of three. But poison oak leaves have rounded lobes and look, well, oak like, while the lobes of poison ivy leaves are pointy and when young look remarkably like boxelder, Acer negundo. (Need to tell the difference in a hurry? Boxelder leaves grow directly across from, or opposite, each other on a stem, while poison ivy leaves grow alternately. Keep this in mind the next time you see leaves of three and are wondering if you should let them be.)

From “be” let’s move to “bee” – a critter most naturalists will jump to defend. Very often when someone gets punctured by a stinger, they’ll say “I got stung by a bee!” But, very often, the actual perpetrator was a wasp. In our area, the most common culprit is the yellowjacket – either the eastern yellowjacket Vespula maculifrons or the German yellowjacket Paravespula germanica.

These two species appear to need only the slightest provocation to start stinging and together account for more than half of all human insect stings.

Bees, by contrast, usually only sting when stepped on or severely harassed, and otherwise are content to spend the day happy as a clam.

Speaking of clams… that’s the word most people will use to refer to the bivalve mollusks that live at the bottom of our local streams. Yet naturalists typically refer to most of those creatures as freshwater mussels. Surely this is a case of po-tay-toe, po-tah-toe, isn’t it?

Although there are a few exceptions, clams and mussels generally have completely different reproductive strategies.

Baby clams can live independently right from the get-go, while young mussels, known as glochidia, must live parasitically on the gills of certain fish species until they are more fully developed.

It’s a fascinating twist on reproduction and one that may inspire you to dig deeper and learn more about the enthralling life cycle of this lowly bottom dweller.

Or, at the very least, know that it’s not a clam.