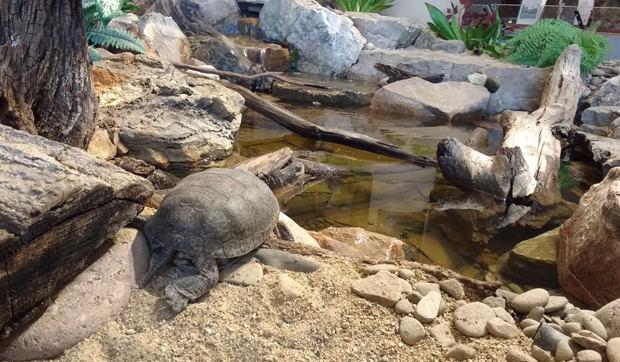 A Blanding’s turtle at Hickory Knolls displays alert eyes and a relaxed body posture, both signs of reptile contentment.

People laugh when I say this, but you really can tell when a reptile is content.

Its body posture, for example, is relaxed but not limp. Eyes are alert but not panicked. Limbs, if there are any, are arranged comfortably rather than clenched. And movements (again, if there are any-healthy reptiles might stay in one place for hours) are unhurried, and may include casual sniffs or tastes of objects or air.

In fact, the March 2013 volume of In Practice, a publication of the British Veterinary Association, contains a fascinating article titled, “Assessing reptile welfare using behavioral criteria” that describes reptile behaviors that are associated with either stress or comfort. It’s an interesting read, and even includes a couple of handy charts-a sort of field guide for captive reptile behaviors.

But if British medical journals aren’t your thing, or if you’d rather watch reptiles rather than read about them, I’ve got just the thing for you: The newly renovated turtle pond at Hickory Knolls.

Regular visitors to the ‘Knolls know that for the last seven years we’ve had a love-hate relationship with our indoor turtle pond. We’ve loved the unique design and the fact that it houses several Emydoidea blandingii, or Blanding’s turtles, an Illinois endangered species.

What we haven’t loved are the repeated maintenance issues we’ve faced since the Blanding’s first moved into the pond. Lighting failed. Rocks shifted and trapped turtles underwater. Limestone leached minerals into the water and drove pH values sky high, which necessitated constant conditioning and monitoring.

But probably the peskiest problem has been the leaks. Even though the pond’s liner was thick and tough, the action of turtles repeatedly sliding over the edges eventually abraded the material and we wound up with water on the floor. Then the waterfall went wonky.

I won’t bore you with the details of our various stop-gap fixes, which included a bright blue, 300-gallon stock tank and several cans of As Seen on TV Flex Seal. But I will tell you that things reached an absolute low one day last August.

The filter’s intake pipe had again clogged, water movement had ceased, and a fine layer of scum coated the water’s surface. Some of the turtles responded by retreating to the bottom of the pond and clamming up, while others climbed out and buried themselves in mulch.

What was a very bad day for the pond, however, turned out to be a very good day for Hickory Knolls. For that was the day that Greg Wittstock, founder of Aquascape Inc. in St. Charles visited and spoke these historic words: “I can help you.”

What Greg told us was that our case was not unique and that Aquascape has remedied all sorts of pond ailments. Aided by the park district’s crack facilities crew, a team of expert plumbers and electricians, a plan for a new Blanding’s habitat developed.

An added bonus was the fact that Greg, whose nickname is The Pond Guy, also is a Turtle Guy. As a kid his hobby of turtle-keeping led to lots of experimentation with pond setups as he strove to create the best possible conditions for his reptile friends. (If you ever visited Aqualand, Aquascape’s headquarters, one of the first things you’ll notice are all the turtles-contented, dare I say happy, turtles-swimming in the ponds.)

Flash forward to today. The new pond has been up and running for a few weeks and all indications are that the rebuild was a resounding success. From a visitor’s perspective, the pond is pretty. From a facility manager’s perspective, all the mechanicals work and the floor is dry.

And from the turtles’ perspective, gauged by the checklist in the In Practice article, life is good. They feed, they bask, they paddle about the pond and explore its various rock and wood features. Best of all, they exhibit what the article’s authors call physical quiescence:  “unremarkable relaxed activity, e.g., free from apprehension and fear activities.”

All turtle lives are important, but the Blanding’s turtles at Hickory Knolls carry the added significance of being part of a regional effort to aid the recovery of wild Blanding’s populations. They function as education animals, showing people what the Blanding’s turtle looks like. Signs adjacent to the pond explain why Blanding’s are endangered and what folks can do to help.

It’s still a little chilly to head outside and observe turtles displaying healthy behaviors in the wild. That day will be here soon enough. But if, in the meantime, you have a hankering to see some contented turtles, head on over to Hickory Knolls. As you watch them go about their daily routines in a relaxed and unhurried way, you’ll find yourself relaxing too.

Who knows? You might even find yourself in a state of physical quiescence.