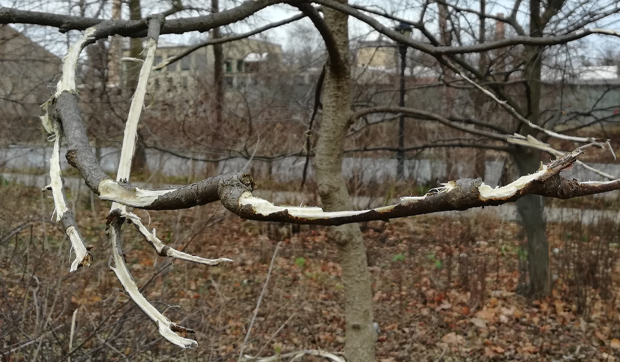 Someone, or something, has shredded the branches on this Ohio buckeye at the Wildflower Sanctuary in Batavia.

The Wildflower Sanctuary in Batavia is just that-a peaceful place to commune with nature and bask in the tranquility of plants and animals living in harmony.

A stately plaque welcomes visitors with words penned by famed naturalist and local legend Dick Young: “Tread softly here, and you will meld into the ageless unfolding natural drama and find a measure of wisdom and contentment that transcends our feverish accomplishments.”

With the bubbling riffles of the Fox River on one side and the serenity of Depot Pond on the other, the Sanctuary affords one the chance to escape the harsh realities of our pandemic-plagued society and connect with the good, solid earth and the solace it provides.

Well, at least it did until a couple weeks ago.

I first became aware that there was trouble in Sanctuary paradise when I peeked at my email inbox over Thanksgiving weekend and saw a message with the subject, “I am mad at Mother Nature.”

The note was from my friend Sarah Kimber, a member of Batavia’s Plain Dirt Garden Club who leads the stewardship efforts at the Sanctuary. Her words were brief and to the point:

“The attached are photos of an Ohio buckeye at the Batavia Wildflower Sanctuary. It is about 12 feet tall, and the branches are damaged all the way up. There are wood shavings all around the base of the tree. Either we have flying beavers, or squirrels are going after the buds, or aliens?

Do you have any suggestions?  I am worried that this will kill the tree.”

I opened the attached photos and saw right away what she was talking about. Just like Dick Young foretold, there was natural drama unfolding all over that poor tree. Branches were shredded, their vital xylem and phloem torn asunder. It looked like someone had decided to trim it with a brush mower.

Now, in nature, lots of organisms provide what could be termed natural pruning. Squirrels will gnaw off twigs and weave them into nests; they also will chew off stems laden with nuts to make harvesting easier. Female cicadas, as they insert their saw-like ovipositors to lay their eggs, can cause die-off at the ends of branches as well. Weather events like ice storms take their toll too.

But the wounds to this tree were unlike any I’d seen before.

As I looked more closely at the photos, I saw that the bark and branches were shredded. They lacked the sharp, clean edges that are the usual hallmark of rodent work. In fact, they looked a lot like deer browse. With their lack of upper incisors, deer pull and tear at vegetation instead of biting it neatly off. The ends they leave behind look tattered and frayed-just like those on this beleaguered buckeye.

But no deer could browse 12 feet up in the air. Well, alien deer maybe. But I wasn’t ready to go there quite yet.

Instead I put aside my very important agenda of eating Thanksgiving leftovers and started researching the qualities of Ohio buckeyes, namely what might make it attractive to wildlife and who that wildlife might be. What I learned was pretty fascinating.

Underneath its bumpy bark, Aesculus glabra is one seething mass of toxins. In fact a USDA fact sheet led with this verbiage, in red italics: Warning: Ohio buckeye is highly toxic when taken internally.

The very next paragraph predicted dire outcomes should anyone dare try a taste: “All parts of the plant (leaves, bark, fruit) are highly toxic if ingested – because of the glycoside aesculin, the saponin aescin, and possibly alkaloids. Symptoms are muscle weakness and paralysis, dilated pupils, vomiting, diarrhea, depression, paralysis, and stupor. Many landowners have eradicated it to prevent livestock poisoning. Native Americans ground buckeye to use as a powder on ponds to stun fish.”

With specters of dead cattle and bloated fish swirling in my head, I continued digging through field guides and research papers, looking for any indication of animals that might find Ohio buckeye beneficial. Squirrels, it turns out, were mentioned repeatedly as being tolerant of the tree’s chemicals. They can eat the nuts, seemingly without ill effect.

With no nuts showing on this particular tree, I began to think about other ways that squirrels could make use of it. Its toxic qualities were particularly intriguing. Knowing that squirrels are pestered by all sorts of external parasites-think fleas, ticks and mites-and reasoning that maybe the buckeye’s chemical arsenal could help defend against them, a hypothesis began to form. Perhaps squirrels were incorporating shredded buckeye twigs into their nests as a means of fending off pests.

Intrigued by this notion, I wrote Sarah back and shared my thoughts. Within minutes she replied and shared some key information that wasn’t apparent in the photos. Turns out my hypothesis wasn’t just a little off. It was waaaay off. I made plans to meet Sarah at the Sanctuary later that day.

Next week: The perpetrator and its motive are revealed.