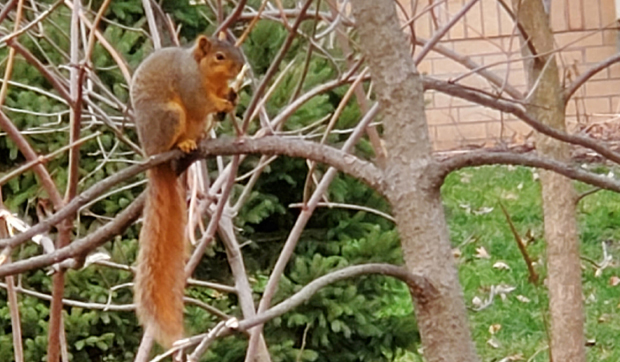 Last week’s Good Natured column ended with a cliffhanger… Who, or what, was destroying the Ohio buckeye tree at the Wildflower Sanctuary in Batavia?

In case you missed it, here’s a recap: Right around Thanksgiving, Sanctuary Steward Sarah Kimber was dismayed to find one of the two buckeyes there nearly annihilated. Someone, or something, had shredded the ends of the branches, leaving tattered chips of once-vibrant, living tissue scattered across the ground below. Sarah was quite concerned, and wondered whether the tree was going to die at the hand of this self-appointed and overzealous pruner.

Doing my Nancy Drew best, I dug into books and websites that detailed the Ohio buckeye’s biology and ecology and quickly learned of the impressive array of toxins the tree produces, as well as the fact that only tree squirrels seemed tolerant of them. My thinking at the time was that maybe squirrels were shredding the branches to use as nest material, thus incorporating some natural insect repellants into their winter abodes.

Well, shall we say, I was definitely barking up the wrong tree.

While I was poring over field guides and research papers, Sarah was doing some investigating of her own. She, accompanied by her faithful canine companion Molly, headed back to the scene of the crime and–in a move that would make even Nancy Drew proud–caught the culprit red- (or, as Sarah noted, brown-) handed!

As Sarah and Molly watched, a fox squirrel munched contentedly on yet another buckeye branch. But it wasn’t the bark the perp was after. Using her keen observation skills, Sarah noticed that the squirrel’s target was the pith-the soft, spongy cells at the center of each branch.

This bit of information proved to be the clue that would crack The Case of the Beleagured Buckeye.

Adding the words “pith” and “fox squirrel” to the internet search term “Ohio buckeye” yielded a research paper that could very well have been written right there at the Batava Wildflower Sanctuary. Instead, though, it related observations that were made in late autumn and winter 1973-’74 in Trelease Woods, a tract of mature forest located in Somer Township, northeast of Urbana, IL.

Wildlife ecologists there observed fox squirrels–and only fox squirrels, not gray squirrels or flying squirrels or any other manner of rodent or herbivore-“clipping the terminal ends of twigs of Ohio buckeye trees, and consuming the relatively large amount of pith that they contained.”

The scientists found freshly cut twigs beneath 10 different buckeye trees. Continuing to observe the happenings there in December and again in March, they noted that light buckeye pith consumption continued throughout the winter, but that the twigs of other trees remained untouched.

Curious about the attraction to that one species of tree, the three ecologists–Stephen P. Havera, Charles M. Nixon and Floyd I. Collins-collected twigs from the buckeye, as well as red oak, basswood, white ash and sugar maple, which were the other predominant species growing there.

Chemical analysis showed that the pith in Ohio buckeye and sugar maple both contain about 12% sugar, whereas the sugar content in the other trees was less than 4%.

A-ha! So the fox squirrel has a sweet tooth. And, as it turns out, is also fairly discriminating.

While the pith of the sugar maple was indeed sugary, containing 55% sucrose, the pith of the buckeye was even sugary-er. It contained 66% raffinose, a compound even sweeter than sucrose. With its larger molecular structure, the researchers theorized, raffinose might also offer the squirrels more energy and thus more calories to burn in the ever-present quest to stay warm during an Illinois winter.

So how widespread is this pith-eating behavior? As part of their research, Havera, Nixon and Collins visited nearby Brownfield Woods and found no evidence of buckeye pith-pilfering. They did note however that oak trees and therefore acorns were more abundant at the Brownfield site thus providing the squirrels with a more traditional source of energy.

As part of my research, I plugged through various papers detailing fox squirrel diets and Ohio buckeye faunal associates. But other than references to the paper by Havera et al, I didn’t find any other mention of this most interesting behavior.

Still wanting to see the Batavia buckeye in person, and also hoping to catch a glimpse of the twig filcher in action, I made plans to meet Sarah at the Wildflower Sanctuary. Alas, the fox squirrel was nowhere to be found. But the wounded branches-and some leftover pith-were present in abundance.

Having a sweet tooth myself, yet cognizant of the dire warnings attached to Ohio buckeye and its toxins, the wheels started to turn. Then visions of sugar pith danced in my head. Could a little taste really do much harm?

At this point I should probably add the admonition, “Kids, don’t try this at home!” as well as point out that Sarah is actually Dr. Sarah, as in Sarah Kimber, M.D. What better time to taste something sweet yet potentially poisonous than with a bona-fide physician standing by?

As it turns out, Sarah was up for the tasting adventure too. We proceeded to pluck pieces of pith, chewing gingerly at first but then with more gusto when no ill effects ensued. We both enjoyed the texture, which was sort of like crisp cucumber, as well as the woodsy flavor.

But was it sweet? It didn’t taste like candy, for sure, but it also wasn’t bitter, salty or sour. We both agreed it could serve as food in a pinch, but also not wanting to test the toxins’ punch, decided that Thanksgiving leftovers would be a much better snack choice-at least for us humans.

And the fox squirrel? Sarah’s been doing her best to stave it off by spraying a deterrent called Squirrel Stopper. Its active ingredients include “putrescent whole egg solids,” as well as mint, rosemary and cinnamon oils-components that, with any luck, will discourage further pith poaching. But another, untouched buckeye remains, and there’s a long winter ahead…