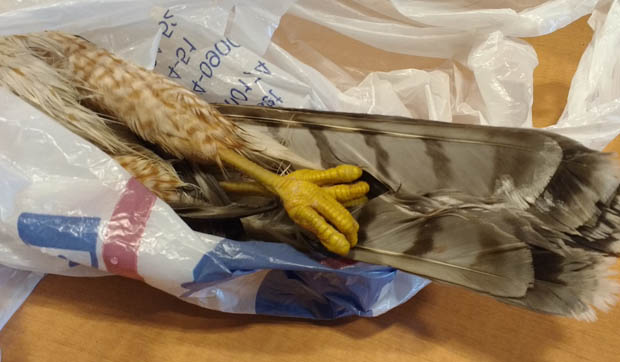 Photo Caption: Here lies Accipiter cooperii, a Cooper’s hawk, likely an unintended victim of poison baits consumed by rodents. The unfortunate animal was brought to Hickory Knolls after having been found in a St. Charles yard.

Chances are, even if you’re not a naturalist, you’re probably acquainted with the concept of food chains. A mouse eats a plant, then is consumed by a hawk. A vole eats some seeds, then is consumed by an owl. Energy that started with the sun first transfers to a plant via photosynthesis, then travels up the food chain in ever-decreasing quantities.

The creatures that are lower on the food chain, the herbivores, need to feed on a lot of plants in order to obtain the energy they need to survive and reproduce. The animals higher up, the carnivores, in turn need to consume lots of herbivores to obtain what they need to survive and reproduce. Toss in some omnivores and decomposers and you’ve got yourself a living, breathing food web of producers and consumers.

Now let’s take this simple and familiar concept of food chains and webs and inject another element: poison. In addition to consuming plant matter, let’s say those mice and voles-animals that, let’s face it, are plentiful and sometimes pesty-consume some poison bait that was placed in a garage, an attic, a basement, a crawlspace.

These chemicals, and there are many (for a great roundup of what they are and how they work, check out www.audubon.org/magazine/january-february-2013/poisons-used-kill-rodents-have-safer) are designed to be lethal. Some are nerve toxins, some are anticoagulants, but regardless of the mechanism, the rodent eventually dies.

Ah, but therein lies the rub.

It can take two to five days for a mousie to succumb to effects of the bait it took. And during that time, a lot can happen. It can head out in search of water. It can stagger about in dazed confusion. And it can be eaten by a predator.

When an animal consumes a rodent that’s been poisoned, there’s a good chance they’re going to get sick too. Depending on the active ingredient and the quantity that the rodent ingested, that consequence may happen swiftly, or gradually.

Then there’s the phenomenon known as bioaccumulation. That means that if a predator-let’s stick with our examples of hawks and owls, though it can happen to mammals too-happens to consume several poisoned rodents, the toxins are going to build up, or accumulate, in its tissues to the point where it succumbs as well.

The reason I bring all this up is that, as I write this, I’m staring at a plastic grocery bag that contains a dead adult Cooper’s hawk. True, I don’t know for sure what killed the bird, but given where it was found, lying in a yard in St. Charles, not near any windows or busy streets, I have to wonder whether it was the unintended victim of rodent bait. Because Heaven knows, we’ve had a lot of rodents to contend with recently.

These past few months have been a busy time for little Peromyscus leucopus, the white-footed mouse. It is our most abundant wild mouse species, and a frequent target of poison baits. (Note: These guys are quite different from Mus musculus, the house mouse. Peromyscus are brown on top and white underneath and live outdoors when it’s warm. M. musculus is primarily gray and, as its common name indicates, lives inside houses year round.)

You might recall last fall we, and Peromyscus, were blessed with a tremendous crop of acorns, hickory nuts and black walnuts. This abundant food in turn gave rise to abundance of young white-footed mice just as the weather started to get cold.

Though equipped with survival skills to ride out a Kane County winter, these little goobers will also take advantage of the many forms of shelter we provide them-like those garages, attics, basements and crawlspaces we mentioned earlier. Three separate times this winter my cat Jimmy has brought me thoughtful gifts of young Peromyscus mice. I figure, if I’ve got them, lots of other folks must too.

Granted, not everyone is lucky enough to have a good mouser like Jim. I also realize that rodent baits offer a convenient solution. No trying to smear peanut butter on a snap trap that’s just as likely to clamp down on your finger as it is a mouse. No having to empty the trap and reset it, carefully, again.

Live traps aren’t a solution either. Not only is it ultimately inhumane to dump a mouse in unfamiliar territory, but it is also illegal.

If at all possible, consider the following preventive steps instead:

Your local raptors, in fact your entire neighborhood food web, will thank you for it.