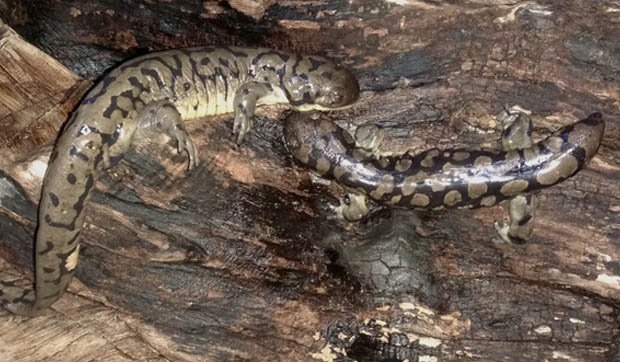 Photo Caption: The tiger salamander on the left displays a tail of normal length. The salamander on the right is in the process of regenerating its tail following an infection. Look closely to see the newly formed tip peeking out at the end.

The Salamander and the New Tail

It’s come to my attention that the last few Good Natured installments have been a little, well, dark. We’ve looked at the toll rodent baits take on birds of prey and other wildlife; learned about woodpeckers and their hyoid apparatuses courtesy of a dead northern flicker; and talked about the deleterious impact loose balloons have on the environment.

Sheesh! I’d say it’s high time we reverse that trend and look at some of the more positive things happening around us. Spring, for instance, is just around the corner and with it comes the promise of renewal. Woodland wildflowers are greening up, birds are returning from their wintering grounds.

Oh, and one of the Hickory Knolls salamanders is growing a new tail.

This little one’s story actually begins about 10 years, during the summer of 2008-also known as The Year I Learned about the Hazards of Storm Drains. My friend Jen alerted me to the fact that dozens of tiger salamanders were dying in her workplace parking lot, which happened to be built on what was once a wetland.

The sallies, mostly recently metamorphosed youngsters, would take advantage of warm, damp evenings to move about. The only problem was that their movements frequently took them onto the large expanse of asphalt that surrounded Jen’s office building (which, ironically, also housed a nature center). There they would languish, eventually getting squished by cars when the new work day began or baking til crispy in the hot sun.

Jen thought it would be a good idea to try and rescue as many as we could. So one night, just after it had stopped raining, we went out and tried. We found plenty of frogs and toads, and even a garter snake gulping down a froggy meal, but no sign of salamanders.

That is, until we looked down through the grates of the storm drains. Through the murk we could see salamanders and toads splishing and splashing in the water that was about four feet down. Worse, they were using the bloated bodies of drowned compadres to help try and stay afloat.

But, goodness, here we go getting all dark again. Let’s wrap this part of the story up by saying that Jen was able to reach through the grates with a net and rescue a number of sallies, and a few toads. A couple salamanders came back to St. Charles with me to become education animals, and they all lived happily ever after.

Happily, that is, until December of 2017, two days before Christmas. It was then that Tyson, our alert front desk associate, noticed that one of the Storm Drain Sallies had stopped feeding. Knowing that the only time a salamander will refuse a plump, hoppy cricket is when something’s wrong, he dug the wee beastie out of its burrow and saw the ghastly state of its tail.

Starting just south of what could be called the salamander’s hips, a large wound gaped and oozed. The v-shaped sore went nearly all the way through the tail, to the point where the remaining tissue extending to the tip was most likely dead. It certainly smelled that way.

I knew that trying to find veterinary care that late in the day, the day before Christmas Eve no less, would be futile. So we went with Plan B: Clean the wound with diluted povidone iodine; keep the salamander on clean paper towels moistened with bottled water; offer food; repeat daily until the animal starts to show signs of improvement.

The only problems were the impending holiday, the fact that Hickory Knolls would be closed, and my plans to head to my mom’s for a few days. The solution?  Pack up the sally, the iodine, the water, some crickets and feeder roaches and take them, along with my overnight bag, dog Joey and a carload of presents, to Mom’s house. (Side note: She called the day after I came back home to let me know I’d left the container of insects at her house. On the kitchen counter. Next to the fruitcake. Oops.)

Over the holidays the salamander still didn’t eat, but also didn’t die. The tail, its blood supply cut off by the deep gash (of which we never did determine the origin) shriveled up and fell off a little after New Year’s. The resilient amphibian periodically shed and over time a thin layer of skin formed and covered the remaining stump.

In the ensuing weeks, Tyson and I took turns taking the sally home with us. Its appetite returned, and we returned it to its enclosure.

Then, two weeks ago, we saw it: Evidence that the salamander was growing back its tail.

You’ve probably heard how lizards can lose their tails and then grow them back. But have you ever seen a regrown lizard tail? They just don’t look the same. They’re stumpy, dark in color and never quite as nice as the original.

Salamanders, however, have an amazing ability to regenerate not just portions of what’s gone missing, but entire body parts. Lost leg? No problem. It grows back, complete with toes. Heart damage? Brain damage? Salamanders can overcome these serious injuries too. The process is a little too complex to explain here and, as usual, I’m about out of time and space. But suffice it to say, these creatures that many view as “lowly” might just hold the key to new treatments for humans who’ve experienced severe injury.

Today the birds are singing, wildflowers are preparing to pop and, here at Hickory, Storm Drain Sally has the beginnings of a new and perfect tail. Happy spring everyone!