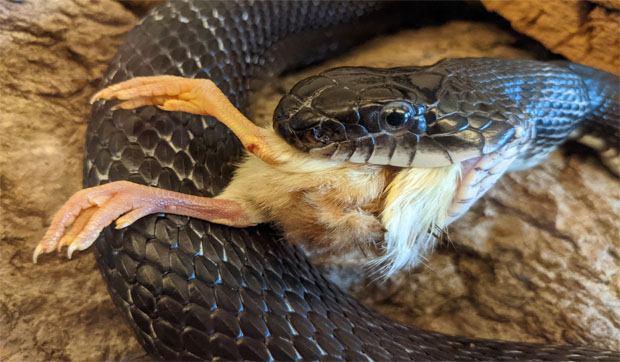 Randy Ratsnake gives another jaw-dropping performance, using an amazing set of mandibular adaptations to swallow his meal. No unhinging, detaching or dislocating required!

Are there any animals more misunderstood than snakes? So many myths exist that I’m tempted to just list them all:
* Snakes are slimy.
* Snakes hypnotize their prey.
* Snakes can sting with their tongues.
* Snakes unhinge-detach-dislocate their jaws when they feed.

Whoa! Hold on a minute there. That last little bit of fiction is heard so often, it’s widely accepted as truth. But you know what? It’s not. Just take a look at my friend Randy here.

Randy Ratsnake is one of nine snakes that call the Hickory Knolls Discovery Center home. At nearly 7 ft. he’s one of our longest, and his impressive musculature means he’s also one of our squeeziest. (I always say, you’ve haven’t been hugged until you’ve had a Randy hug. Those strong muscles, for constricting prey, are impressive for sure.)

Because he’s cold-blooded–that is, an ectotherm that does not generate his own body heat–Randy needs to eat only about once every week to 10 days. But when suppertime comes, it’s a sight to see.

In the wild, ratsnakes like Randy would eat a varied diet of mice, voles, and chipmunks; birds and bird eggs; and maybe even the occasional frog. But since we have neither a freezer nor a budget big enough to accommodate this wide range of comestibles, Randy is served a selection of frozen mice, rats and chicks (as in baby chickens) that we thaw prior to feeding.

Even though his diet is somewhat tame, his feeding instincts are not. Gray ratsnakes aren’t commonly sold in the pet trade and, as a result, captive individuals have retained many of their wild traits. Randy approaches every meal as if he were hunting in a downstate woodland-one of several natural habitats gray ratsnakes call home. (Although native to Illinois, Pantherophis spiloides does not naturally occur in Kane County.)

Having been placed in an open area-like, say, the Hickory Knolls lobby-Randy’s tongue begins flicking. Oscillating flicks pick up molecules of scent which are then delivered to the roof of his mouth, where the Jacobson’s, or vomeronasal, organ resides. This direct line to the brain then gives Randy the information he needs to decide whether there’s something to eat, or something that’s going to eat him. (More on this later.)

You know what’s really cool? A snake’s forked tongue actually smells in stereo. That is, it can tell which direction an odor is coming from based on which side of the tongue the smell reaches first.

Once Randy has determined where his “prey” lies, he doesn’t waste much time. When really hungry, he strikes hard, grasping the thawed animal with tiny teeth that function like aggressive Velcro-that is, they grip rather than sever and chew. He then coils his body around his meal and gives it a good squeeze before sending it down the hatch.

Here’s where the myth-busting comes in: There’s no unhinging! Snake jaws, it turns out, are completely different from the mammal jaws we humans are so familiar with.

Instead of temporomandibular joints connecting the upper and lower jaws, snakes have a combination of extra bones–so more than one “hinge” point–as well as flexible tendons that allow the mouth to gape widely, both up and down and side to side. It might look like everything’s come unhinged, but it’s really just a different configuration of parts from those we’re used to.

Next, to start the swallowing process, Randy will orient the meal so that it goes down head first. This lengthwise means of swallowing is fast and efficient–you wouldn’t eat a hot dog by starting in the middle, would you?

Snakes in the wild don’t have the option of a leisurely meal. While they’re feeding, they’re also vulnerable. That’s right; snakes are predators, but they’re also prey. Randy typically downs a small rat in about 90 seconds; chicks are even faster-maybe a minute from start to finish.

No hands or fingers, no knife or fork; snakes instead have another amazing adaptation: their lower jaws. Rather than being fused at the chin, like ours, a snake’s lower jaws are connected by elastic-y tendons. They can spread apart and move back and forth. First one side, then the other, moves forward and pulls back, hauling the prey into the mouth and then the throat; at that point muscle contractions take over and the meal moves down toward the stomach for the next step in the digestive process. Pretty awesome, huh?

I’ll soon be heading to Hickory Knolls for another round of snake feeding and myth-busting. I’m thinking this week, to mix things up a bit, we’ll put on a little music…

The theme from Jaws, perhaps?