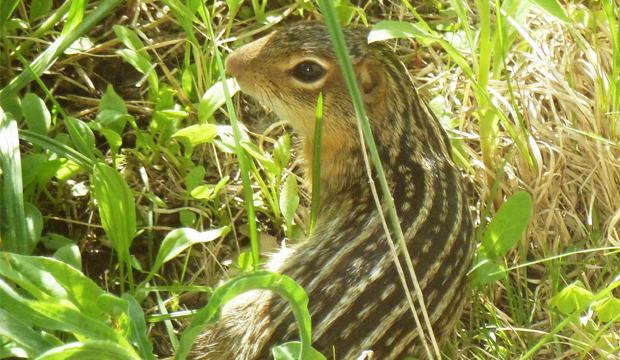 Photo Caption: It’s not a chipmunk! Unlike their woodland-dwelling cousins, 13-lined ground squirrels prefer grassland habitats. They are prodigious collectors of seed but also feed on insects including grasshoppers and beetles.

“That’s not a chipmunk.”

The astute visitor, wise beyond his 4 1/2 years, stubbornly stood by his resolution, while his companions (people who, I’m guessing, were Grandma and Grandpa) tried to gently dissuade him.

“Honey, look, he’s eating seeds. Just like the chipmunks we have at our house,” Grandma said.

“And he’s stuffing more seeds away in his cheek pockets,” Grandpa said. “Just like the chipmunks at home.”

“But he’s different,” the young scholar asserted. “He’s bigger, and his stripes are different.”

Indeed “he,” the small mammal in question, was definitely not Tamias striatus, the eastern chipmunk, but rather Spermophilus (Ictidomys) tridecemlineatus, the thirteen-lined ground squirrel. Like a tiny, furry vacuum it gleaned industriously below the Hickory Knolls birdfeeders, sucking up seeds and tucking them inside its rapidly expanding cheek pouches.

In time Grandma, Grandpa and their sage little grandson moved on, but I stayed there by the windows a little longer, watching the rodent do the work for which it was named. “Spermophilus” means seed-lover, and this little guy, or gal, certainly seemed to be enjoying the bounty of kernels and grains the other feeder visitors had left behind. Besides loading its cheek pouches for transport back to the home burrow, the ground squirrel stopped frequently to nosh.

Cute as the dickens, it would sit up on its haunches, bite open a seed, then chew and swallow, all the while keeping an eye out for predators-and an especially careful watch on a large and overly curious creature behind the window glass. Eventually, its cheeks full nearly to bursting, the little squirrel bounded off, disappearing into the grasses that border the nearby savanna. (My curiosity sated, I left too to go through the many photos I’d snapped to see if any were even remotely in focus.)

Maligned by many gardeners as a “gopher” responsible for pillaging both seeds and young crops, these small rodents nonetheless fulfill an essential ecological niche. As burrowers, they help aerate the soil and make it easier for plant roots to spread. They also enable rain and snowmelt-something we’ve had plenty of these past few months-to percolate into the soil that has become less compacted due to their actions. And their abandoned burrows provide needed habitat for creatures-snakes, for example-that can’t dig but still have a need for subterranean shelter, as well as cool, moist refuges for toads and salamanders.

Sure, ground squirrels do have a taste for seeds, including freshly planted corn and beans, but they also dine regularly throughout the summer months on garden pests like grasshoppers, caterpillars and beetles. And they’re important prey for all manner of carnivores, from coyotes, foxes and weasels (a long-tailed weasel lives in a rock pile near our birdfeeders), to hawks and, interestingly, great blue herons.

(I’ll try not to turn this into a major sidebar, but… Several years ago great blue herons have established a rookery, or nesting colony, on the grounds of the Illinois Department of Juvenile Justice facility, a.k.a. the St. Charles boys’ home, that is adjacent to Hickory Knolls. The herons have, on more than one occasion, visited the community garden plots that lie next to our building and plucked up a ground squirrel meal for either themselves or their nestlings. Prior to the herons’ arrival, red-tailed hawks would occasionally visit the garden plots, only to be mobbed and shooed away by our many resident red-winged blackbirds. It’s my hope that the herons will prevail where the hawks could not, and help provide the ground squirrel control some gardeners say is needed.)

Thirteen-lined ground squirrels’ original habitat was the shortgrass prairies of the Plains States. But as more land, including the tallgrass prairies and woodlands of Illinois, was cleared for agriculture and development, the rodent expanded its range. Today it is equally at home in our “suburban shortgrass” habitats-particularly the turf of parks, ballfields and cemeteries that are edged by taller grasses and/or cropland-as it is in its “home” states on the Great Plains.

Despite this past winter’s harsh conditions, the species seems to be doing quite well-thanks in large part to its burrowing skills. The average thirteen-lined ground squirrel digs many different sorts of burrows depending on need-a large one for nesting, short ones for hiding, and a deep one for hibernating down below the frost line.

Not a day goes by that we don’t see these boldly marked-though also well camouflaged–creatures scurrying across our entry drive, along our patios and through the turf that forms the Hickory Knolls lawn. It’s tough, though not impossible, to count the lines on their backs. And yep, sure enough, there are thirteen, arranged as alternating stripes of light and dark, with white spots dotting the dark lines from nape to rump.

Thirteen-lined ground squirrels. They’re a ubiquitous part of the grassy landscapes in parks and preserves throughout Kane County. And they’re definitely not chipmunks.