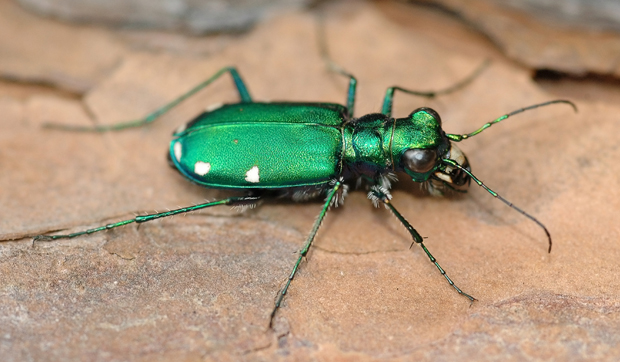 True to their name, six-spotted tiger beetles have six spots on their back. Unless they have eight, or 12, or none at all. To be absolutely sure you have a Cicindela sexguttata, look for the large, white mandibles on the front of the head.

I’ve never, by any stretch of the imagination, been considered quick. I can’t dash, I don’t dart. In fact, the only time I recall moving with any speed at all was once when I was being chased by a horde of angry yellowjackets.

A flat-out sprint, and they still got me.

Given that track record, it’s only fitting that much of the wildlife I know best is, well, slow. Snails, for example. We all know what pace they move at. And freshwater mussels, bless their little two-chambered hearts; they make snails seem like speeding maniacs.

So imagine my delight when, on a cool day last week, I had a chance to get reacquainted with an insect that’s usually way out of my league: Cicindela sexguttata, the six-spotted tiger beetle.

I was out walking in our Hickory Knolls Natural Area, remembering how in years past we’d be hosting school field trips at this time of year. Alas, things are different now, work wise. But nature’s activities are proceeding as usual.

I remembered how we would often come across tiger beetles during our jaunts, and how chilly weather would slow their normally fast-as-lightning zigs and zags down to a more manageable, even sluggish, rate. (Most insects, having limited means by which to warm themselves, usually need temperatures of 55F or above to be able to fly. Tiger beetles are no exception.)

Moving at a pace somewhere between a mosey and an amble, I headed toward the spot where we’d found the beetles in the past. The sun might not have been out, but good luck certainly was shining down on me that day. Several of the captivating insects were just starting to emerge from their larval burrows, right where I’d remembered seeing them before.

Tiger beetles are about as close to winged gems as you’ll ever find here in Kane County. Their elytra, or leathery wing covers, are a bright, metallic-looking green. The six spots in their name can be present or absent, or range up to as many as 12, and are whitish in color.

Stylish too, these beetles sport white mandibles that match their spots and are characteristic traits-that is, they are present even if the spots are not. It’s these strong, overlapping mandibles, or jaws, that allow the insects to fulfill their important ecological niche.

Six-spotted tiger beetles, and their many tiger beetle cousins, are predators that consume a wide variety of arthropods. Ants, moths, spiders, even other beetles can’t escape the tenacious tigers, which snatch their quarries both on the ground and in the air.

Their larvae, though less mobile, are equally voracious. Lacking wings, they hang out at their burrow openings, waiting for unsuspecting prey to come ambling along. When a meal comes within range they pop up, seize the hapless creature, then retreat to dine in the relative safety of their tube-like homes.

Adult six-spotted tiger beetles are an undeniable part of woodland walks in early summer. Though they’re only about a half inch in length, their brilliant colors and quick movements make them hard to miss.

Look for the beetles on trails in or near wooded areas. They can be found on the ground as well as on objects such as rocks or logs. One moment they are perfectly still, the next they are turning one way or another, always orienting toward movements they perceive.

This wariness actually serves a dual purpose. Besides scoping out the landscape for potential prey, tiger beetles also have to make sure they do not become prey themselves. Fierce though they may be, and despite a distasteful chemical defense, tiger beetles are preyed upon by birds, as well as other insects like dragonflies and robber flies.

The weather forecast calls for warm temperatures and mostly sunny skies over these next few days, conditions that are ideal for stalking tiger beetles. If you’d like to try and spot some for yourself, head out for a walk in the woods.  When you see a beetle up ahead, slow down and try to keep your shadow behind you. If the insect startles and flees, follow it with your eyes; these territorial tigers rarely fly far and will often end up circling back after only a few minutes’ time.

Or…you could wait for the next cool-weather day, and make a trip over to the natural area at Hickory Knolls. Aim for the middle of the park, where the trails are wide and have sand and gravel as their base. Keep your eyes open for wee, emerald-green beasties trying to warm themselves along the path.

Who knows? If your timing’s right you might even run into a slow, sauntering naturalist to help you with your hunt.