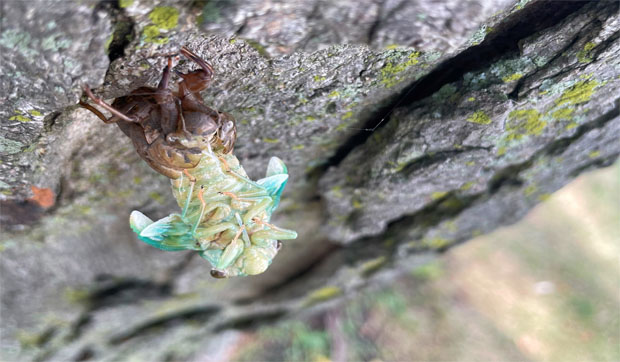 Hello World! After spending somewhere between two and five years underground, this cicada sheds its hard outer covering one more time in preparation for its final life stage. Photo courtesy of Sara Tillmans.

When was the last time you saw a little green man?

For me, it was last Saturday.

I was walking through the Hickory Knolls savanna when something small and bright caught my eye. I looked more closely and there he was, all shiny and chartreuse: a freshly emerged annual cicada, clinging to his now-empty shell.

Male cicadas are reliable performers in nature’s summer symphony, sounding off from July through September from the branches of trees throughout the Tri-Cities. But their loud finish stands in stark contrast to their quiet beginnings.

The adult insects we’re hearing right now started off as eggs that were laid anywhere from two and five years ago. Way back then a little green woman, or female cicada (who by the way does not sing) used her saw-like ovipositor to cut slits at the end of a branch and deposited her eggs.

Upon hatching, the tiny nymphs – smaller than a grain of rice – dropped to the ground and dug in. There they remained, feeding on plant roots and shedding their hard outer skin, or exoskeleton, several times before finally clawing their way back up above ground for one final molt.

If you happen to find the cast skin remains, or exuviae, take a look at the forelegs and you’ll see how well adapted cicada nymphs are for tunneling through the earth. Thick and powerful looking, the juveniles’ legs have a bulk even Popeye would be proud of.

The legs of the adult, by contrast, are much thinner and suited for grasping–qualities that come in handy as at this last life stage, which lasts only a few weeks. Adult cicadas hang out high in the trees, clasping twigs and branches. Their objective has switched from feeding to breeding, and that’s where the sound comes in.

Male cicadas are choristers, sending out species-specific songs in an effort to find a mate and complete their circle of life. Using special sound-producing structures called tymbals, located where the abdomen meets the thorax, they advertise their fitness and availability to female cicadas that likely are listening nearby.

Chances are you’ve been listening in as well, whether you’ve wanted to or not. Cicadas are among our loudest insects, with some calls measuring over 90 decibels. Cicada references tell us that this volume level is similar to that produced by a motorcycle or a lawnmower. But you know what? I ride a motorcycle, and can clearly hear cicadas singing as I putter around town.

That’s fine with me. In fact I get a kick out of doing informal cicada censuses, listening to who’s singing what-and when.

For example the dog day cicada, Neotibicen canicularis, sounds kind of like a buzz saw. Its piercing tone rises in both pitch and volume before sputtering off at the end, and is commonly heard in the afternoon and evening until dusk.

It’s this insect song, more than any other, that takes me back to my college days. I remember sitting in a classroom in Lincoln Hall at the University of Illinois at Urbana-Champaign, sweltering in the August heat. The windows were wide open and, over in the locust trees, the dog-day suitors were singing their little hearts out. I couldn’t tell you what we were supposed to be learning that day, but that memory of that intense whine will be with me forever.

Other species have songs that are just as distinct. The scissor-grinder cicada, Neotibicen pruinosa, which also calls in the afternoon and evening, makes a slow, pulsating sound, much like that of a pedal-driven sharpening wheel spinning around and around.

Linne’s cicada, Neotibicen linnei, has a song that’s described as a salt-shaker or lawn-sprinkler vibrato. These fellows can be heard pretty much all day long, so it’s no surprise that they are our area’s most abundant species.

And then we have the lyric cicada, Neotibicen lyricen. This species, which sings in the morning and early afternoon, has a buzzy song with a vibrating, almost rattling quality, and is notable for its length-songs lasting up to a minute have been recorded.

Soon, though, the cicada-song season will soon be drawing to a close. Already it’s not hard to find dead ones on the streets and sidewalks. Some have been predated (cicadas not only are noisy, but also nutritious), while others are just plain done.

While many cicadas are winding down, a few are just starting up. This weekend, keep your eyes open as you walk past tree trunks, fence posts, even garages. You just might spot a little green man of your very own!