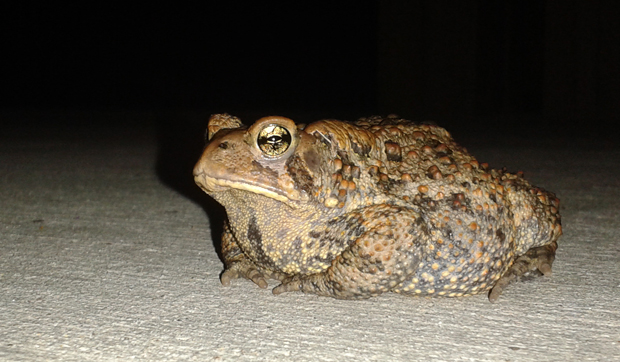 A female American toad, drawn by the trilling calls of ardent male suitors, makes her way to a shallow breeding pool created by recent rains.

Well, they’re at it again.

The boys up the street have started up with their rabble-rousing ways, raising a ruckus into the wee hours several nights this past week.

While I’m no fan of noisy neighbors, I don’t mind the racket these fellows make. Over the years I’ve come to anticipate and even revel in its volume. Truth be told, I actually missed it earlier in the year when a springtime drought put the kibosh on the boys and their large gatherings. We’re talking of course about the local fraternity known as Anaxyrus americanus, the members of which go by the familiar name American toad.

Typically these fellas begin calling in late April and May, when snowmelt and spring rains combine to form convenient, though temporary, ponds and puddles. But this year was different. We’d had abundant snowfall in winter, but the supplemental rains didn’t arrive. Temperatures were cooler too, and then when they started to rise they bypassed Warm and went straight to Blazing Hot. The dryness and accompanying heat combined to produce truly awful conditions not just for toads, but frogs and salamanders too. A few determined individuals opted to call, but many did not.

But now, in a classic example of “just add water,” we’re hearing toads calling in numbers and at volumes usually associated with early to mid May. The rains arrived just in time to fill the ponds, ditches and other low spots that toads need to carry on their species.

Drawn by the moisture they’ve so desperately needed, male toads have made their way to the nearest semblance of standing water and have, finally, started calling in earnest. Their goal: to attract females of the species and engage in amplexus-the amphibian way to procreate.

What will be their success rate? Well, I guess that depends on how you measure “success.”

American toads are by no means endangered. In fact I’m inclined to think their numbers have benefitted, at least locally, from people’s increased interest in water gardening and backyard ponds. I know that 20 years ago we never heard toads in our St. Charles neighborhood. But now their presence is hard to miss. So, if you measure success by a population’s numbers, then American toads appear to be doing just fine.

But if you break down that success rate to an individual level, well, you have to start to wonder. I’ve seen male toads attempting to mate other males-efforts that end with a certain amount of thrashing and a squeaky “release call” emitted by the mate-ee. I’ve also seen female toads literally dead in the water, drowned beneath the attentions of too many males. Success? I think not.

Besides their penchant for mating with whatever moves, toads also are indiscriminate when it comes to breeding locations.

As amphibians, they need water in which to lay their strings of gelatinous eggs. Ideally, that water will be in the form of a quiet pond or marsh-the sorts of places you just naturally associate with frogs and toads. However, in reality American toads will opt for whatever water happens to be handy. (I once found a string of toad eggs floating in a flooded tire rut on a muddy path. Indiscriminate? Indeed!)

Probably contributing to this lack of discernment is the fact that American toad metamorphosis-that magical transformation from water-dwelling, gill-breathing tadpole to land-dwelling, air breathing toad-takes only about 6 to 8 weeks. You don’t need a permanent body of water when things happen that quickly. (Bullfrogs and green frogs, our area’s largest frogs, by comparison take one to two years to transform.)

A newly metamorphosed toad, sometimes called a toadlet, is not much bigger than a pencil eraser. No strangers to the concept of safety in numbers, they emerge from their water body en masse and disperse shortly thereafter. They then set about the business of growing, gaining weight and bulk at an astounding rate. They’ll be an inch or more in length in just a few months.

What’s interesting about this year is that we’re seeing two distinct groups of offspring. In areas where breeding was able to occur, toadlets are emerging to begin their life on land. But in areas where breeding was delayed, we’re just now seeing eggs and tiny tadpoles. This latter group will have to work hard to attain sufficient size before temperatures start to cool and winter preparations begin.

It’s a tall order for sure. But as long as we don’t revert to drought conditions, and as long as those puddles and ponds remain, the later toadlets should have the same odds of survival as those that sprang forth earlier. They all face the same daily chores: avoid predators, consume lots of prey, and grow, grow, grow. Do I think they’re up to the challenge? Toadally.