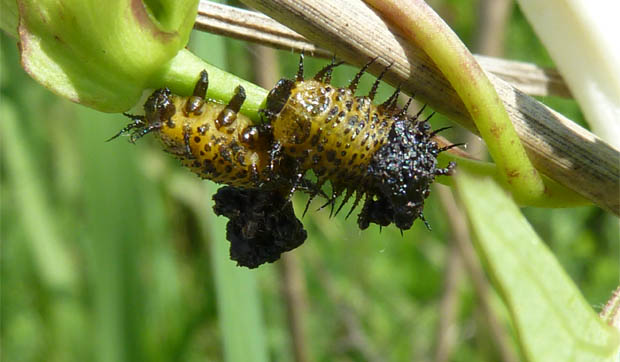 Photo Caption: Tortoise beetle larvae protect themselves from predators by creating a shield of distasteful items collected on forked structures at the tip of the abdomen.

Thar’s gold in them thar hills!

But hold on a sec. Before you run for your pans and pick axes, we should probably clarify a couple things. One, the hills in question are located in the Hickory Knolls Natural Area, where no digging is allowed. And two, the gold isn’t the precious-metal type, though it is indeed a treasure – especially if you like bugs.

What we’re talking about this week are golden tortoise beetles, Charidotella sexpunctata. As we have in summers past, we once again have discovered these little gems – a fairly common species in our area – hanging out on bindweed, one of the insect’s favored food plants.

Thanks to some built-up fluids and a really neat optical illusion, these beetles look for all the world like drops of gold glistening in the sun.

As I stood there admiring their beauty, I realized that, once again, I was going to miss out on an opportunity to snap a photo of these truly glorious creatures. I did have my phone with me, but its ability to capture tiny things like tortoise beetles (which are about 1/4-in. in length) combined with my own limited photography skills, meant a mental picture was as good as it was going to get.

I consoled myself by giving the beetles a couple of light pokes.

I know, it sounds bad, as if I were taking out my disappointment on some poor defenseless arthropods. But my intent was not to harm them; rather, I just wanted to see the beetles change color.

And, did they! In a flash they transformed from rich metallic gold to a still-shiny, but much less impressive reddish-orange.

Researchers are divided on the purpose behind this behavior. Does it confuse predators? Is it an attempt to mimic ladybugs, which use chemical deterrents to avoid getting eaten?

While the reasons may be murky, the science of how it occurs is not.

The beetle’s normal – or “at rest” – golden hue is created when light reflects off liquid that is held in thin grooves between the layers of the insect’s transparent elytra, or wing covers. But when the beetle is agitated or stressed, it drains the moisture away, revealing an underlying color of ladybug-red, spots optional. The color change also can occur during periods of extreme drought, when the insect might not have an adequate moisture intake, as well as when the insect dies.

Being able to change color is a cool trick, as anyone who’s ever observed it can attest. But this species displays an even more interesting behavior that has no doubt saved the lives of many young beetles over the ages.

That forked appendage is good for more than just looks. It’s also a collection device.

You’re probably wondering what, pray tell, might a beetle larva need to collect? The answer is twofold: shed skin and fecal matter.

So now you’re probably wondering… why?

Shed skins and fecal matter, as you might imagine, are distasteful, and generally are regarded as items to avoid. But if you happen to be a helpless beetle larvae, jam-packed with nutrients other creatures might find useful, distasteful is exactly what you want to be.

Over time the shed skin and droppings build up on the fork, arching over the young beetle like an umbrella – a poop parasol, if you will. In theory, it’s a great defense against predators.

But no defense is perfect. (If it were, we’d be overrun with tortoise beetles!)

For example, members of the insect order Hemiptera, the true bugs, are equipped with piercing/sucking mouthparts. Picture a dinky, hinged drinking straw permanently attached to a bug’s head and you’ll start to get the idea. While many species use their straws to feed on plant juices, others plunge their predatory probes into animal food sources – such as tortoise beetle larvae.

Golden tortoise beetles and their handsome cousins, the mottled tortoise beetles, have a taste for plants in the morning glory family; the clavate tortoise beetle, my personal favorite, hangs out on plants in the tomato family, namely ground cherries, jimsonweed, horse nettle and nightshades. (Why pick one tortoise beetle over another? In a word, charm. The clavate species has spots on its back in the shape of – I swear I’m not making this up – a teddy bear. Talk about being cute as a bug!)

The next time you find yourself shaking your head at the invasive bindweed entwined on your perennials or the nightshade under your shrubs, take a minute to check them over. You might find you have a tiny drop of gold, or even a teddy bear, perched on them thar plants.