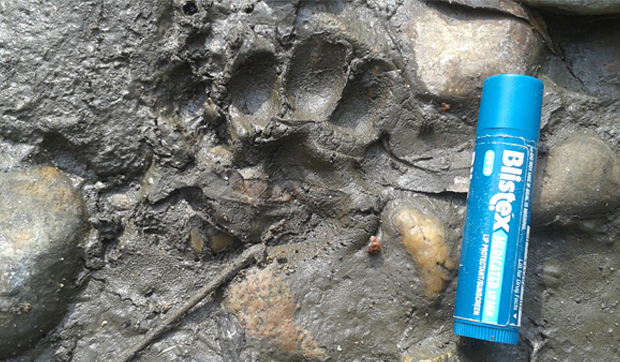 I can say with 95% certainty that this is the footprint of a passing bobcat. Found in the soft mud along Ferson Creek, it measures around 2 in. (lip balm is 2 5/8 in.). The back of the heel is obscured by a rock, but the shape of the toe pads combined with a near-complete absence of nail marks indicates this track was left by a cat.

Several years ago we received an email from a St. Charles resident who had found the remains of a feline beneath a pine tree on her property. Her question was, Is this a bobcat, or Bob the Cat?

Looking at details like whiskers and ear markings, we determined that the dearly departed was Bob the Cat. But from that day forward, every time I’ve seen cat tracks in snow, mud or sand, I’ve stopped to inspect them. With bated breath, fingers and toes crossed, I hope against hope that I’ll beat the odds and find evidence of Lynx rufus-the animal we call the bobcat. But almost always the tracks belong to Felis catus-that is, Bob the Cat’s brethren and sistren.

Such a record isn’t surprising in our area, especially when you look at the numbers of each kind of cat. Chicago alone is home to an estimated 200,000 feral cats, and that figure doesn’t take into account the number of housecats that are let outside to roam and hunt, in between bowls of kibbles. If I did my math correctly, that’s one cat for every 13.6 people. Pardon my language but, Holy Cats!

Here in the suburbs we might have a slightly lower ratio of cats to humans, but I do know a day doesn’t go by where I don’t see at least one scampering across a street or slinking down an alley.

Meanwhile, the number of bobcats across the entire state of Illinois is about 5,000. When you add in that much of that population is found in the southern and western part of the state, it adds up that bobcat sightings in our area are rare.

But rare doesn’t mean nonexistent. I’m convinced these cats, secretive as they are, do exist in Kane County. Whether they’re sticking around and breeding here is another question entirely, but I think we certainly have the habitat to support individuals passing through.

So what kind of signs do bobcats leave behind? And how can you tell that the marks aren’t those of a Bob cat? Here are some helpful hints:

Tracks: When you think about what makes cats’ feet unique as compared to dogs’, what comes to mind? That’s right, claws. Cats’ paws are equipped with nifty, retractable claws. When the animal walks, those sharp nails are tucked inside sheathes above the toes. Unless the substrate on which a cat treads is super soft, those claws are not going to show. Dogs tracks, by contrast, almost always show claw marks, which will appear as dogs or small lines in front of each toe pad.

If you’re a faithful Good Natured reader, first of all, thank you! But second, you may recall that a few weeks ago we talked about the types of tracks dogs leave behind. In the photo accompanying the column, I’d drawn an X in the gaps that are between the innermost and outermost toes. With cats, though, that doesn’t work. The leading edge of the heel pad is broad and consists of two lobes. You can’t draw an X through the gaps because those lobes in the way.

So once you’ve identified the tracks you’re looking at as feline, how do you differentiate between Bob and bobcat? Size. The print of a domestic cat’s foot measures about 1 1/2 in. from the back of the heel to the tip of the leading toe (which, incidentally, is analogous to our middle finger). Bobcat tracks, by comparison, average 2 in.

Context helps a lot when looking at cat tracks. Are the tracks on your deck, porch or front step? Chances are it’s a neighborhood Bob, simply paying a visit. (Oh I know, the internet is full of photos of bobcats peering in windows, watching curiously as the resident feline goes bonkers. But I think we’re a few years away from having that sort of bobcat population density in our area.

A more likely place to see bobcat tracks would be along waterways, which are throughways for many types of wildlife. Think about it… We have a lot of creeks in our area, and the vast majority have bridges built over them. Ferson Creek passes under Randall Road; Brewster Creek flows underneath Route 25; Mill Creek runs under Fabyan Parkway; Tyler Creek is spanned by all sorts of bridges as it wends its way through Elgin. I think you get my point, which is that animals like bobcats can follow creeks all around Kane County. As long as the water is low, they can cross roadways by walking the shorelines that lie beneath.

An added benefit: Most of our local creeks see little in the way of human foot traffic, so there’s not much chance of people creating a disturbance. If there’s one thing bobcats hate, it’s commotion.

As for other signs that bobcats leave behind…well, here I wish you luck. In all my years of seeking these animals, I’ve yet to find any other evidence of their presence in our area. Bobcat scat is similar in to Bob the Cat’s in that it usually shows segments, but the ends can be tapered or blunt. It can be deposited in a scrape and partially covered, a la a litterbox, or left in the open.

Next week we conclude our series on wildlife tracking by looking at some animal oddities-strange prints and peculiar holes, as well as the signature work of some common invertebrates. Spoiler Alert: Charlotte wasn’t the only one to sign her webs!