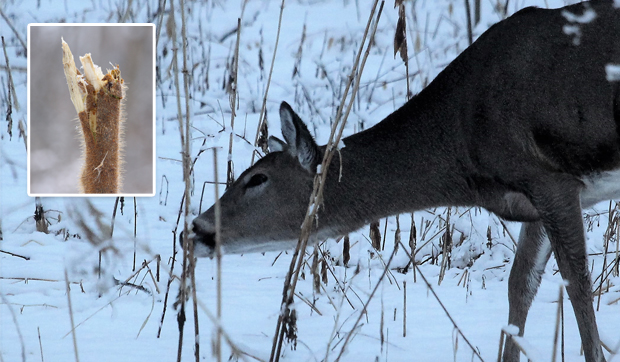 White-tailed deer lack upper incisors, so rather than neatly nipping off vegetation they pull and tear as they browse the tops of wildflowers and the tips of twigs. (Photo courtesy of Valerie Blaine.)

Walking along Ferson Creek recently, I couldn’t help but notice how the tips of so many plants-young trees, shrubs and crispy brown wildflowers alike-looked really ragged. Frayed. Shredded, even.

The damage was consistent, beginning at the base of the plants and continuing up almost as high as my head. As I surveyed the scene, my brain played a little trick on me. What first came to me as the thought “Oh dear,” slowly morphed into the realization, “Oh! Deer!”

These chewed-or, more accurately, torn off-stems and twigs are a distinctive sign known as deer browse. Because white-tailed deer, the only native ungulate, or hoofed mammal, we have in our area, have no upper incisors, they grab and pull as they forage. The result is vegetation that, at best, looks like it got a bad haircut, and, at worst, dies from the abuse.

When you’re out and about in deer habitat, which we have in abundance in our local natural areas as well as wooded neighborhoods, keep an eye out for deer browse as well as these other common signs:

Where do you look for all these signs? In our area, it’s pretty easy. Locations that have steady food sources and good hiding places will be rife with signs of deer–maybe even the animals themselves. Bear in mind though that deer are crepuscular, which means they are most active at dawn and dusk. Open woodlands (those that have been maintained via prescribed burns and invasive brush removal), cornfields and yards-especially those with birdfeeders–in exurban and rural areas all are likely to support somewhere between several and many whitetails. Within the St. Charles Park District, Norris Woods, Delnor Woods, Persimmon Woods and the Hickory Knolls Natural Area are good sites to put your newfound deer-tracking knowledge to use.

Next week our tracking series continues with a look at a common but elusive local mammal, the American mink.