Frogs may move about during winter warm spells, as shown by these tracks in snow. (Photo courtesy of Mary Ochsenschlager)

Over the past several weeks, we’ve taken a Good Natured look at the tracks and signs of many of our area’s most common mammals, from the ubiquitous squirrels and raccoons to, last week, the elusive bobcat and its not-so-secretive cousin, Bob the Cat.

But every week, as we reviewed the “typical” signs our wild neighbors leave behind, I was reminded of all the oddball things that crop up during even the most ordinary walks in our local wilds. The weird holes in trees; the strange tangles of webs; the pawprints where you least expect them.

So today I thought it might be fun to take a look at some of these oddities, all of which can be found nearby and, sometimes, right at your feet.

First up is a sign that I’d say is No. 1 in terms of people writing or calling in to question. Honestly, it looks like the work of a vandal who was armed with a drill with a 1/4-in. bit, a ruler and a level, and was just a wee bit compulsive about drilling. That’s right, we’re talking about small, round, evenly spaced holes on a tree that usually are lined up in a row and extend just enough into the bark to hit the xylem, or sapwood.

Whoops, I kinda started to give away the perpetrator there. Small round holes in a row, in our area, are the work of the yellow-bellied sapsucker. These birds migrate through in spring and, needing a quick hit of sugar as well as something more substantial, tap holes into tree trunks. The sap flow gives them a bit of carbs and then, later, when insects show up to take advantage, the birds return to fill up on protein. 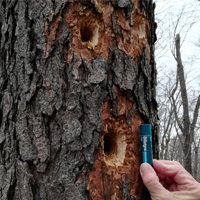 Our next sign also is courtesy of a member of the Picidae, or woodpecker, family. Its mark, too, looks like vandalism, and quite heavy handed at that. The pileated woodpecker, big as a crow but with a beak like a jackhammer, forages for insect larvae by hacking large holes in dead and dying trees. The resulting excavations can be anywhere from one to several inches in length, and look for all the world like someone attacked the tree with a hatchet.

As I was thinking about the various forms of destruction wrought upon our trees, I was reminded of an email I received many years ago. So long ago, in fact, that emails were infrequent, and just receiving one was an oddity.

So anyway, the photos showed a tree that had been demolished, I mean literally shredded into pieces. The person who sent the pictures wanted to know just what sort of animal would be capable of inflicting such damage. Surely its claws must be strong and sharp, and very, very large. Could it have been a bear? A cougar?

I’ll admit, at first I wasn’t sure what to make of the poor tree. It really had taken a beating. But something didn’t seem quite right with those animal theories. Bears and cougars do scratch, but not to the point of shredding the tree. Plus some of the wood and bark had been flung several feet away. 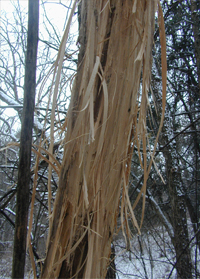 We got our answer a few weeks later during a spring storm-a real gullywasher, with lots of lightning. I heard a tremendous boom and I knew something had been hit. When things calmed down a bit I went outside and there, maybe 100 yards or so from the nature center, was a tree that had been hit by lightning. Shredded, it was, with bark and wood shards flung all around. Aha Mystery solved!

Certain other signs we come across during our ramblings are far less dramatic, but intriguing nonetheless. Here in St. Charles, we have a photo that has become somewhat legendary. Taken by the founder of our naturalist department, Mary Ochsenschlager, the snapshot depicts one of wildlife tracking’s great rarities: frog prints in snow.

A winter warmup prompted the beastie to go on a walkabout (hopabout?) and Mary happened along at just the right time. I first saw this photo in 2007 and ever since, each winter, I’ve scanned snowy banks along ponds and streams hoping to find some frog tracks of my own. And now I bet you will too! 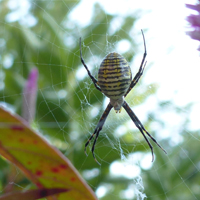 Sometimes animal signs can be easy to overlook. Spider webs, for example, are so common we tend to ignore them (unless you walk into one during an early morning jaunt). But did you know those webs can also provide clues to the spider’s identity? Funnel webs, sheet webs and tangled webs, as well as the magnificent orb webs…each are made by distinctly different types of spiders.

You usually can’t identify a spider to species just by looking at its web, but the Argiope spider webs let you come pretty darn close. These spiders, also known as garden spiders, spin orb webs but add a distinctive decoration to the center. Sometimes described as a zipper, the zigzag structure, called a stabilimentum, is a giveaway that the web was spun by a member of the Argiope genus. Who says Charlotte is the only spider to sign her work?

And speaking of signatures, I can’t tell you how many sidewalks in our fair towns bear the autographs of kids, families, even the concrete companies themselves. But have you ever noticed how many animals also have left their signature signs in concrete, preserved for posterity?

Next time you’re out for a walk in your neighborhood, pay attention to those imperfections in the sidewalk. Birds, squirrels, chipmunks, cats, dogs…I’ve found all of these during jaunts around the TriCities. They’re a fun way to hone your tracking skills, in an odd but good-natured way.