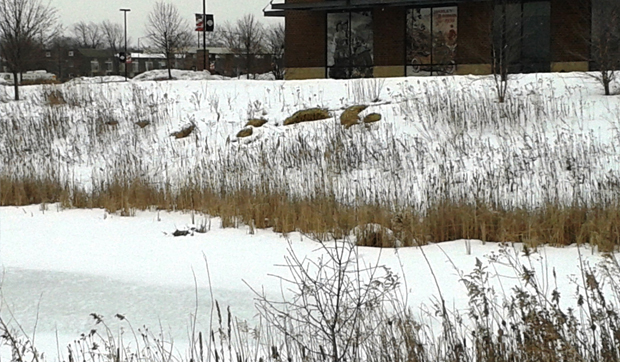 Mink live where prey animals are plentiful. In the TriCities, their habitat ranges from marshes and streambanks to retention ponds in subdivisions and shopping complexes.

Several years ago, my friend Jessi and I went exploring at McKee Marsh–a small but wonderfully diverse parcel at the north end of the Blackwell Forest Preserve in DuPage County. The winter day was crisp, bordering on downright cold, but the sun shone brightly and the wind was calm.

As is often the case with our outings, Jessi and I had ventured off trail and were poking among some intriguing inlets along the side of the marsh, taking note of the number, and variety, of animal tracks in the snow: deer, rabbit, rodent… Oh my, lots and lots of small rodents! These little guys, probably voles, had actually worn ruts in the snow’s crust as they’d scurried from one hiding spot to another.

Walking along at the slow, stop-and-start pace naturalists are known for, Jessi and I jabbered about various observations we were making, most notably that all the animals we’d found signs of were herbivores. No fox or coyote prints, no feral cat tracks. It was a bit odd, we both agreed. But we’d also barely begun our ramble, so perhaps the signs of the carnivores were yet to come.

Just then, almost as if on cue, we found something that made us pause in our own snow-crunching tracks: a partially consumed rodent, lying on the ice just below one of the vole “highways.”

Aha! Even though many herbivores occasionally dabble in animal protein, the marks around the remains didn’t look like the work of a killer rodent. No sirree. The unlucky creature, most likely a meadow vole, had fallen victim to another marsh denizen-one whose distinctive tracks gave its identity away almost immediately.

The bounding leaps that led to and from the “crime scene” were the sign of Neovison vison, the American mink.

Now, some Good Natured readers might remember back when we began this series of columns on winter wildlife tracking, I made reference the “usual suspects”-those animals whose signs you might expect to encounter in suburbia. Over the past few weeks, we’ve described several common mammals that live in the TriCities’ neighborhoods, parks and preserves. Mink, you’d think, would fall out of the range of what is considered “usual” and “common.” You might, however, want to think again.

Mink are locally abundant throughout our area. If you’re someplace wet-and that someplace could be anywhere from a streambank to a marsh to a retention pond-chances are, mink are nearby. In fact, even if you’re away from water, but near chickens, mink might pay a visit.

These adaptable creatures, members of the weasel family, are adept hunters that feed on a wide range of prey, including crayfish, fish, frogs, turtles, rabbits, muskrats and rodents like those McKee Marsh voles. With the uptick in backyard chickenkeeping in our area, mink have traveled farther away from their typical habitat. In fact, a year or so ago I found a roadkill mink on 7th Street in St. Charles-pretty far from the Fox River, but only a block or so away from a chicken coop.

In springtime, mink will avail themselves not only of hens’ eggs but also the eggs produced by our local waterfowl. Back when I worked at Red Oak Nature Center in North Aurora, I once watched a mink climb a tree and crawl into a wood duck box. S/he emerged a few minutes later with egg literally all over his or her face.

When you’re out and about near a wetland or riverbank, or a chicken yard, and you spy indications of animal activity, don’t forget to “think mink” as you scroll through your list of usual suspects. Here’s a list of their telltale signs:

Tracks: Like the McKee mink’s tracks indicated, these animals are bounders. That is, when moving quickly, their slinky bodies bound along much like a toy Slinky. Front feet land, then hind feet come down in virtually the same spot, just as the front feet take off again. This motion creates a track pattern of pairs of dots 12 in. to 35 in. apart, depending on the mink’s speed.

When stalking though, mink will walk in a pattern that leaves four distinct prints at a time. Each foot has five toes and will leave a print that measures from 1 1/4 to 2 in. in length, depending on the animal’s age and gender.

Scat: Mink leave behind a dark and twisty scat, 1 to 3 in. in length, usually on prominent objects along a bank. The scat typically bears obvious signs of the individuals’ most recent meal. Crayfish exoskeletons are common constituents, as are small bits of bone and fur.

Slides: Even though the mink’s larger cousin, the otter, is generally regarded as the most “playful” member of the weasel family, mink like to have their share of fun too. This time of year-that is, snow season-is a great time to look for mink slides in soft snow. Slides can be toward water, or just down a hill, and measure between 3 and 3 1/2 in. in width.

Next week our tracking series continues with a look the family Felidae, including the bobcat and its domestic cousin Bob the Cat.