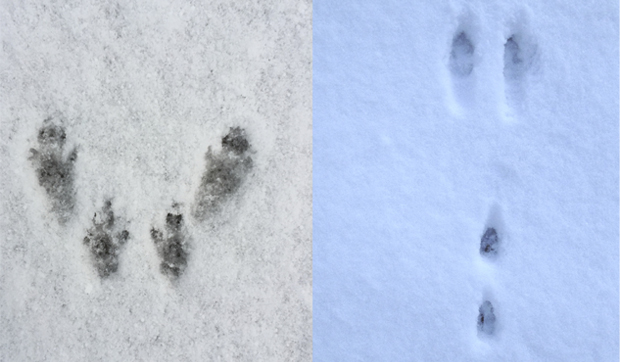 Photo Caption: Use this memory trick to keep track, haha, of the different signs squirrels and rabbits leave behind: SQuirrels leave SQuare tracks, while Ys are the mark of the bunnY.

This week we continue our series on wildlife tracking with a look at two of our most common wildlife neighbors, rabbits and squirrels. But first, a word of warning: This ain’t gonna be easy.

That may come as a surprise, given the major differences in appearance and habits between the animals themselves. Big ears and cottony white tail vs. small ears and a long fluffy tail. Ground dwelling vs. tree dwelling. Lagomorph vs. rodent.

Illustrations in tracking books would seem to reaffirm these distinctions. Squirrel feet, as depicted in black and white drawings, have prominent pads with four toes on each fore foot and five toes on each hind foot. Rabbits, meanwhile, have feet that are fully furred; even drawings in books tend to lack details and distinct toes.

Next time you’re outside though, take a look around. The tracks of these two very different types of animals are surprisingly similar.

This seeming sameness is due to the fact that both animals, moving at a normal pace, are hoppers. Or, in trackers’ parlance, gallopers. As they move forward, their front feet come down first, and their hind feet follow. If you’ve ever played leapfrog, you’ve done the same.

Instead of looking at the individual prints, it’s best to look at overall patterns. When a squirrel hops and lands, its larger back feet land parallel, and just a little in front of its smaller front feet, which also land side by side. The resulting shape is square-ish. Rabbits, on the other hand, tend to land with one forefoot in front of the other. This “line” of two fore prints behind the two larger hind prints looks kinda like the letter Y.

You can remember it this way: SQuirrels leave SQuare tracks, while Ys are the mark of the bunnY.

It’s also helpful to take a look at the track pattern as a whole, taking note of where it started and where it leads. Does it go from tree to tree? Then it’s most likely from a squirrel. Does it linger near and under the cover of tall grasses and shrubs (or, as was the case for my friend Lisa, patio furniture)? That sort of pattern would indicate rabbit.

Scat: Rabbit scat consists of round pellets about the size of plump peas-or small Cocoa Puffs, if you’re a cereal fan. One or two might appear amid the tracks as a rabbit hops along; you may find a collection of them deposited under bent-over grasses or the low-hanging branches of trees and shrubs-areas where the animal spent a considerable amount of time resting and staying out of sight.

Squirrel scat is smaller and oblong, roughly the size and shape of pine nuts (or large Rice Krispies). It is deposited randomly, sometimes near a favorite feeding spot but really it can appear just about anywhere. I’ve found squirrel scat on tree stumps, picnic tables and once, to my chagrin, on a pair of shoes I’d left outside to dry.

Gnaws and chews: Even though they are not classified as rodents (due to, among other features, a set of “peg” teeth, directly behind their top incisors) rabbits are well adapted to gnawing. They will chomp away at stems protruding from the snow, leaving sharp, angled edges (as opposed to the raggedy, shredded edges left by deer). Rabbits also will consume the tender bark on shrubs and young trees.

Squirrels, on the other hand, don’t gnaw on bark so much as nuts and seeds-and, as you may have found this past holiday season-the wires of Christmas lights strung on trees. Acorns or walnuts chewed nearly in half are definite signs of squirrel feeding activity.

Nests or drays: Although tree cavities are preferred, squirrels also will make their homes inside leafy nests known as drays. These structures, which consist of leaves and twigs woven together, typically are located near the tops of trees and can measure a foot or more in diameter.

As a hedge against storm damage, parasite invasions and other hazards of life in the wild, squirrels tend to maintain at least two “homes” at any given time. Consequently, not every dray is occupied at every given moment.

Rabbits, as we mentioned earlier, take shelter under shrubs’ low-hanging branches or within the friendly confines of tall grasses. For confirmation, look for accumulations of those plump peas or Cocoa Puffs.

Come springtime, females will dig shallow nests, often in the middle of a yard. Not every nest is destined for success, however, and to compensate females are capable of producing several litters each year-a bane for gardeners, but a boon for hawks and owls.

Up next week: We focus on the track and sign our area’s largest wild herbivore-a creature that, like rabbits, can give gardeners fits. Oh, deer!