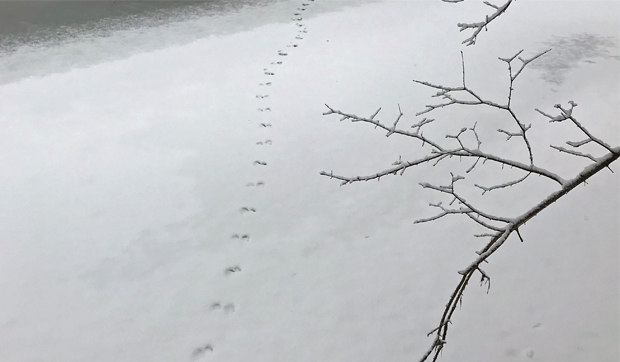 Photo Caption: Even though the individual prints were not clear, the paired nature of these tracks identifies them as those of a raccoon. (Photo courtesy of Valerie Blaine.)

Well, it’s almost February, the month of love. The greeting card and candy companies know it. The jewelry stores know it. And so, too, do the raccoons, opossums and skunks.

They may not be out buying trifles and baubles or making reservations at a romantic restaurant, but many of our local mammals will soon be finding themselves in the throes of an annual, (or semi-annual, since some will mate again in summer) hormonal surge. In short, it’s time for them to rouse from winter torpor and find a mate.

For us, it’s also a great time to head out and search–not for a mate (although I suppose that could be an option) but instead for the signs of these three prolific local species. An added plus this year is the predicted warmer (well, for February) weather this weekend. Above-freezing temperatures will almost certainly have these animals up and on the move. Here’s what to look for:

Habits and Habitat: Raccoons, opossums and skunks all are denizens of both woodlands and suburbia. Of the three, raccoons are the best climbers and, despite their chunky build, quite agile too. (Just the other night I, and two very excited canine companions, watched one scamper along the top of a neighbor’s chain-link fence.) These facts are important because raccoons will choose tree cavities, if they can find them, as den sites, but in our neighborhoods have found that attics and garage lofts make suitable substitutes.

Opossums can and do climb, and may make their homes in a tree cavities. But they are just as likely to adopt an unused burrow–or the space under a shed or deck. They’re also fairly adept at making their way into basements and crawlspaces. (Note: Despite what you may have seen in cartoons and kids’ books, opossums do not hang by their tails. They do aid in climbing though, and can be used to encircle leaves and other material to drag back to a nest.)

Skunks, by contrast, are strict ground dwellers. Long claws on their front feet mean they are well equipped for excavating burrows, either in wooded settings or under front steps, back steps, porches, decks or sheds.

All three animals are omnivores, meaning they eat plant and animal material. They’re great scavengers too and, I swear, know neighborhood trash pickup schedules just as well as human residents do. All three also are nocturnal, so the best time to look for their track is in the morning, after their shift has ended.

Of the trio, raccoon is likely the most common track you’ll see. Front paw prints, to me, look like miniature human hands, with five digits prominently displayed. Hind prints, which also have five digits, are longer, and tend to show the more of the foot pad. Raccoons lumber as they walk; that is, they move both limbs on one side at the same time–they don’t alternate the way dogs and cats (and people) do. Therefore, their tracks display a side-by-side quality.

Opossum tracks are fun for two reasons. The five digits of the front paws splay out in a shape that is remarkably star like. And the rear paws, which also have five digits, include an opposable thumb as the innermost digit on either side. Sometimes though the front and hind prints will overlap, making the sign look as though it was left by a much larger animal. In my experience, the star-like quality is still somewhat apparent in the forward part of the track; also, if the snow’s not too deep, you can also usually make out the print of the opposable thumb.

Skunk tracks can be hard to figure out, especially if you’re dealing with less-than-optimal tracking conditions, like melty snow. Even though their feet have five digits front and back, the toes are shorter, which makes it harder to distinguish each individually.

Front paws, to my eye, often leave prints that are rounded and cat like, but with five toes instead of the four that feline tracks display. If you can, look for little dots a short distance ahead of the front paw prints. Those marks are imprints made by the skunk’s long claws.

And then there’s the matter of scat. Because all three of these mammals are omnivores and scavengers, scat composition varies widely with location and season. Animals that live near birdfeeders are going to display lots of seed hulls. When berries are ripe, look for dark, moist scat with intact berry seeds protruding.

During winter, when diets typically contain less moisture, raccoon scat tends to be tubular, with blunt ends–kinda like little cigars. Pay attention to where you’re seeing it, too. Raccoons hey usually leave this sign at the base of trees, but also frequently “go” up, off the ground, on fallen logs and low stone fences. They also commonly create latrines–areas where scat literally piles up. A word of caution when investigating this sign: Raccoons, perhaps more than any other local mammal, carry all kinds of diseases and parasites. All those things you vaccinate your pets against? Raccoons are vectors. All those worms you hope your pet doesn’t get? Raccoons usually have them, and shed the eggs in their scat.

Opossum and skunk scat can be a little trickier. It will be smaller than raccoon and, in my experience, darker, with tapered ends. But, again, these characteristics will depend on diet, and diet will depend on what is most readily available.

Many thanks to those of you who’ve called and written to share your tracking questions and stories! It’s fun, isn’t it? Next week we’ll continue our winter tracking explorations with a look at two other common wild neighbors, tree squirrels and cottontail rabbits.