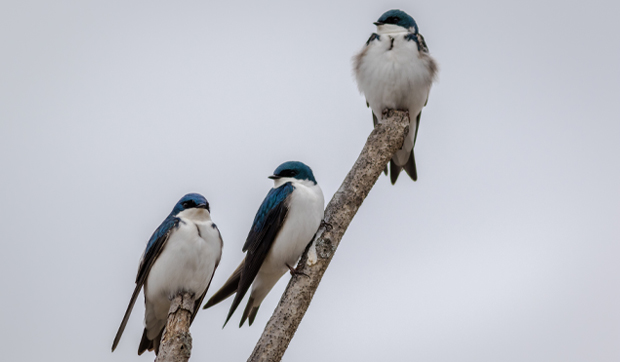 In spring male tree swallows, identified by their iridescent blue backs, arrive on their breeding territories about a week ahead of the females, which have similar but duller coloration.

Last week’s glorious weather day was hard to resist, wasn’t it? A light breeze, sunshine, temperatures in the 70s…on March 21, no less! It only made sense to head out and drink in the sights and sounds of the season.

And by drink, I mean swallow.

There we were, our program supervisor Emily and I, walking in and along our glorious Fox River. Turning over rocks and other submerged objects, we were on a quest to assess the numbers of rusty crayfish living in the water alongside Mt. St. Mary Park in St. Charles.

At any rate, I was standing in the river peering down through the current to the substrate below, hoping for a glimpse of a crayfish or two, when it happened: I walked into a mating cloud of chironomid midges. Then, not fully aware of the consequences, I drew in a deep breath. Through my mouth.

Have you ever inhaled a crumb or other tiny bit, only to have it “go down the wrong pipe”? Imagine a whole bunch of wriggly, mosquito-sized crumbs. That’s what I had going on in my mouth and throat.

It’s hard to be subtle in a situation like that, though I did try. A little gag here, a gurgling cough there, an involuntary kick that sloshed river water into my knee boots…these actions saved the bugs from going past my trachea. But then, rather than expelling them from my mouth, I swallowed them.

I really didn’t give the experience too much thought until two days later, when I once again found myself strolling along the Fox for Crayfish Quest Part Deux. This time, though, the scene was quite different. I was on the east side, at Riverside-Buie Park. A steady rain was falling, frogs were calling and male red-winged blackbirds were alternating between their “Oak-a-ree!” song and the sharp whistle they direct at intruders. And even though there were few bugs about, there were swallows galore.

The tree swallows, that is. Tachycineta bicolor.

I actually gulped as I looked up at a large and mostly dead tree and saw dozens of these delightful birds arrayed along the uppermost branches. Most were preoccupied with grooming the raindrops off their plumage, but every so often a few would launch from their perch swoop about, no doubt chasing after the midges that had been so plentiful just a couple days before.

It was impossible to tell for sure whether these were Kane County tree swallows, freshly returned from their wintering grounds along the Gulf Coast and down into Mexico and Central America, or long-distance migrants heading for points north. But if I had to pick I’d choose the latter, as local males have already been spotted splitting off from their migratory flocks to set up territories and, soon, housekeeping, in tree cavities and birdhouses.

If you visit Hickory Knolls, on St. Charles’ far west side, any time from now through say September, chances are good you’ll see these birds in action. They’re fond of the bluebird houses maintained by our loyal volunteer Mike Swanson, and readily move in once he’s got them set up for the season.

In fact it was those houses that led me to my first up-close and personal interaction with this species some 20 years ago. I’d gone out to Hickory Knolls, which was then called Campton Hills Park, and hiked up the first bump, or kame, on the east side of the natural area. It too was a drizzly spring day, and I pretty much had the park to myself. Well, except for the swallows. They were swirling above and showing me, in their swallow way, that they were none too pleased at my intrusion.

New to birding, I was trying to focus my binoculars on one of the birds when *BONK* one hit me on the back of my head. It was really more of a tap, just hard enough that I thought, “Aww, the poor guy can’t see me standing here in the rain.”

But then *BONK* it happened again. This time was no accident. Tree swallows, I later learned, compete vigorously for available nesting realty; they frequently tussle with each other and aren’t afraid of human interlopers either.

I really wish I’d written down the date of that encounter. I have a vague recollection of it being “April;” I’m also fairly certain the year was 2000. Why does this matter?

Tree swallows, being common and easily studied, are a species that is altering its behavior seemingly in response to climate change. Research shows that as spring temperatures have warmed, tree swallows today are nesting an average of nine days earlier than pairs in the 1960s, when breeding bird data collection began.

Because tree swallows are a little more adaptable when it comes to feeding, and will even consume plant foods if it gets really cold, they are the first of the swallow species to return in spring. But as the temperatures start to moderate, we can look forward to the return of their cousins the northern rough-winged, bank, cliff and barn swallows.

As we get into April, keep an eye out for all these avian acrobats-and their favorite foods, flying insects. The birds’ pursuit of their prey can bring hours of enjoyment to the careful observer. You might even find you’re able to discern bonded pairs and, later in the season, family units chasing bugs on the wing. Just be sure to keep your mouth shut!