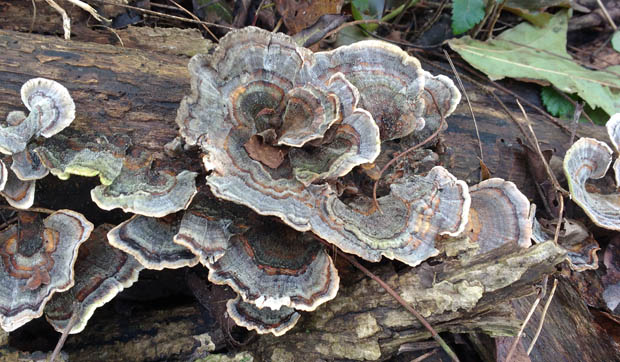 A member of the bracket, or shelf, fungus family, turkey tails add a subtle hint of color to the late-fall woodland floor.

If turkey graced your holiday table last week, you know what this week means: The tail end of the bird.

But rather than turkey soup, turkey a la king or turkey tetrazzini, all fitting ends for a noble beast, I’m thinking of a turkey tail of another sort-the turkey tail fungus, Trametes versicolor.

One of our area’s most common woodland fungi, turkey tail is true to its names. Looking at the scientific binomial, Trametes means thin, and versicolor means “of various colors.” Both these words aptly describe the fan-shaped fungus.

And you don’t need a lot of imagination to see how the common name turkey tail befits this organism. Like the fanned tail of a proud gobbler, this fungus can sport beautiful bands of tan, orange, brown and black. (And green! But only when terrestrial algae take up residence on the surface.)

Even if you’re not really into fungus, turkey tail can make for a fun discovery at this time of year. For one thing, all of our native wildflowers have set seed and/or headed back underground for winter, so our woodland floors can seem like a sea of varying shades of brown. But the bold patterns of turkey tails add interest virtually anywhere there are fallen logs.

For another thing, this fungus is really easy to find. It’s not fussy about the type of dead hardwood it grows on. In fact, it also occasionally will grow on the rotting wood of conifers.

Which brings us to another neat fact-turkey tails serve an important function in woodland ecology. Their mycelia and hyphae-the small, hair-like appendages you don’t see-penetrate the dead wood, then excrete enzymes that digest its lignin. Lignin is brown part of the wood, and once it is consumed by the hyphae, the white cellulose is what remains. Hence, turkey tails create what is known as white rot.

But the fungus does way more than just “rot” wood. It actually works as a miniature recycling plant, taking up nutrients from the dead wood and making them available to other organisms in the woods. Besides the microbes that eventually move in and break down turkey tails, the larvae of various insects also feed on the fuzzy, leathery tissue.

Which leads us to the question, “Are turkey tails edible?” The answer is a slightly complicated “Yes, but…”

As we’ve previously noted, this fungus is tough, as in not easy to chew and swallow. It does, however, dry out nicely, and can be ground up and used as a tea, or stuffed into capsules. (Western medicine has yet to accept turkey tail’s medicinal properties, but Eastern practitioners have long prescribed this fungus to treat a variety of ailments, including hepatitis and cancer.) Some people even say that turkey tails can be plucked and chewed like gum, although the flavor has been described as “earthy” and “musty.”

Although this fungus is quite distinctive looking, a number of very similar species can make positive identification a little difficult. To be absolutely positive you’ve found T. versicolor, you need to look underneath.

T. versicolor is a member of the family Polyporaceae, the polypores, which means it disperses its spores through tiny (1 to 3 per millimeter) pores on the underside of the cap. Similar species lack these pores.

In our area, turkey tails grow in the fall, although their resilient nature makes it possible to find them year round. Their bold stripes and beautiful colors may fade over time, but they still retain their pleasing shape and form. Which is more than I can say for holiday leftovers.