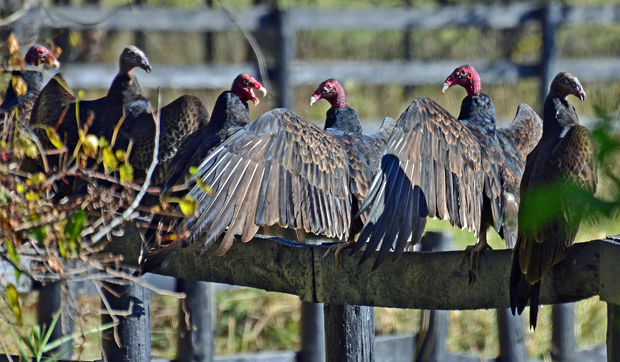 Turkey vultures spread their dark wings to maximize the surface area exposed to the sun’s warming rays. These birds are on the move now and can be spotted roosting in groups along or near the Fox River.

Turkey vultures are the sorts of birds that command attention. For one, they’re VULTURES-dark-feathered and hunchbacked, they look vaguely creepy even under the best of circumstances. For another, they’re big-their 6-ft. wingspan rivals that of the bald eagle and makes them hard to miss as they soar overhead in search of carrion, the dead stuff that makes up the bulk of their diet.

Now, imagine seeing not just a few of these large, eerie, roadkill-feasting creatures, but rather several dozen, circling overhead like so many flying monkeys. That’s exactly what happened to me recently as I drove north on Route 47 through Yorkville.

I had just left the taxidermist’s, having picked up an assortment of critters we’d had mounted for display. (Two of the three actually had been roadkill. So basically I was driving around items that would have been turkey vulture vittles, had we not intervened.)

Approaching the bridge over the Fox River, I noticed a few dark forms up ahead, high in the sky. Those few became several, and the several soon became many. That’s when I knew I had to pull over and appreciate of one of fall’s lesser-celebrated events: turkey vulture migration.

When you think of migrating birds, certain images tend to come to mind. Tiny warblers, for example, flitting between branches as they glean insects that will fuel their journey south. Turkey vultures, by contrast, couldn’t flit if their lives depended on it. Their bulky bodies, adapted for tugging open carcasses, are better suited to soaring, which they do with grace and apparent ease.

Flying Vs are another common migration image-large flocks of noisy Canada geese, flying in V formation. Or even larger, noisy Vs of sandhill cranes. Yet neither of these sights, nor sounds, is apparent with vultures.

Although they move in groups, turkey vultures don’t use the economy of energy created by flying in a V-shaped flock. Instead, individual birds form their own individual Vs as their wings swoop upward and remain, outstretched, in a dihedral or V shape. They can hold this position for hours as they soar, flapping only when it’s time to change direction or come in for a landing.

The secret to the turkey vulture’s seemingly effortless flight lies in its deft use of rising warm air currents known as thermals. Unlike some birds that hit the air with, or before, the sun, turkey vultures typically wait to fly until the day is well underway. As the sun’s warming rays heat the air, thermals begin to rise. It’s then, amid much flapping and flailing, that the turkey vultures take off. Circling and tilting slightly to use the currents to their best advantage, they go up with the rising air. Upon reaching the top of a thermal, they glide-as fast as 60mph-on a downward slant until they reach the next thermal, and the cycle begins again. Mile after mile they travel in this fashion, coming down to land only as the sun is setting and the air begins to cool.

That’s the stage I happened upon last Saturday. Dozens of vultures were coming down into the trees to rest for the night. But to get back to our migration analogies, there was yet another big difference between the vultures and geese: the sound of silence.

If you’ve ever been near a body of water when a large flock of geese come in for a landing, you’re likely familiar with the ruckus they cause. The honking, loud while the birds are in the sky, can become positively deafening once the group has safely landed.

When a group of vultures comes in, by contrast, there’s barely any sound at all. That’s because turkey vultures lack a syrinx, which is the bird equivalent of a mammal’s larynx or voicebox. Consequently, they don’t say much, aside from the occasional grunt or hiss.

As I watched the vultures end their day, I wondered what the next leg of their journey would bring. How many miles would they go? Where would they end up?

As it turns out, only recently have scientists begun looking at the migration habits of turkey vultures-the New World’s most abundant scavenging bird of prey. Researchers affiliated with Hawk Mountain Sanctuary in Kempton, PA, began tagging the birds several years ago in an attempt to learn more about their habits and patterns. Closer to home, Illinois Natural History Survey breeding bird surveys are following the birds’ population gains; that data indicate the species’ numbers are growing at an impressive rate of more than 10% each year.

Although it’s unlikely any you would encounter a tagged vulture in northern Illinois, it never hurts to look. And if you have travel plans that will take you west to the central migration flyway or east to Pennsylvania, keep your eyes open…especially if you find yourself driving in a vehicle with former, or future, vulture vittles.