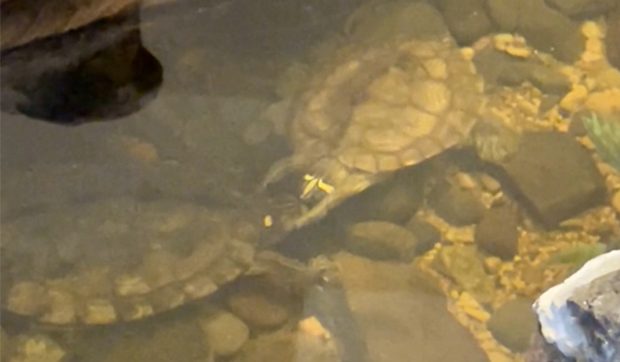 Courtship in the turtle world can include many behaviors, including the fluttering of the foreclaws in a display known as titillation.

February is known as the Month of Love, but if the Hickory Knolls turtle pond is any indication, March has its romantic moments too. Love, or something like it, has been spotted amid the interactions of our two map turtles, and it’s been making waves with staff and visitors alike.

I suppose I should back up a bit.

Courtship is a big deal in the animal world, and turtles are no different. Although it’s pretty much always the males that get the ball rolling, the methods they employ are as varied as their species.

Common snapping turtles, our largest chelonians, haven’t had a lot of study devoted to their behaviors, but follow a sequence of movements that include head movements, biting and, sometimes, what amounts to wrestling moves. Spiny softshell males, which are quite a bit smaller than females, often “test the waters” by nudging a potential mate. Despite this nod toward civility, a fair amount of chasing often ensues. In fact during the spring breeding season it’s not uncommon to see male softshells with bite marks from unreceptive females who used their sharp beaks to prove that no means no.

Male Blanding’s turtles, by contrast, follow a sequence of eight different actions that include chasing, chin-rubbing, swaying and, my favorite, gulping. In this step, which is thought to convey scent information as well as stimulate the female, the suitor draws water into his mouth and then squirts it over his intended’s snout. (Interestingly enough, this action was once perceived as the male biting the female; but in the 1980s close cinematic review revealed its true nature. (Even more interesting, snapping turtles may also employ this tactic. However, a good-natured review of the literature found only one reference, from 1933, that described the activity. Keep this lack of data in mind this spring and, if you encounter a pair of snappers in close proximity, take some notes. And pictures! I’m sure they won’t mind.)

At any rate, we also have turtle species whose courtship sequences rely on specially adapted body parts. And that’s where the Hickory Knolls courtship comes in.

In certain turtle species, including members of the genera Chrysemys, Graptemys and Trachemys (or painted turtles, map turtles and sliders) the males’ front claws grow substantially longer than the females’. And by substantially, I mean ridiculously so. (Have you ever seen a person with fingernails so long, you wonder how they get anything done? That’s the way these boys look.)

I’d always heard that the long claws played a role in courtship, but until recently I’d never dug much deeper than that. It turns out the behavior in which the claws are used is known as titillation, and it involves the male rapidly vibrating those long foreclaws about a female turtle’s face as one of several steps of courtship choreography.

Now, in our nature center’s indoor pond, we have one Chrysemys, a female named Picta, and two Graptemys-a male named Francis and a female named Mabel. They are both map turtles, but are different species. And that’s not the only twist!

A few weeks ago Emile-Margaret, our facility coordinator, happened to look into the pond and witnessed one map turtle titillating about the face of the other map. Even better, she took a cell phone video of the action.

Picture a Three Stooges sketch where Curly repeatedly waves his hand in front of Moe or Larry’s face and you’ll have a pretty good idea of the action that occurred. One map turtle positioned itself in front of the other, extended its front feet forward and turned them so that the backs were touching. It then then proceeded to flutter its claws for about 1 second before pausing for about 2 seconds and then flapping again for another second or so. So speedy was the act, it happened nine times over the course of the 22-second video.

More than just a cheek scratcher for the turtles involved, it was a head scratcher for the humans who were watching. That is, until we learned that young turtles (and both Mabel and Francis are still a few years shy of maturity) will flutter their claws just…well, just because.

Keep in mind, turtles are creatures that operate largely on instinct. Hatched from eggs that incubate in ambient soil temperatures, with no care from either parent, young turtles operate first on innate patterns of behavior triggered by certain stimuli. As they grow, the turtles supplement these instinctive actions with learned behaviors.

We’ll probably never know exactly what was going through the minds of Francis and Mabel-and Picta too, after she was approached by the youngsters. Love isn’t quite the right word, but something like it has been activated in their turtle brains…with titillating results.