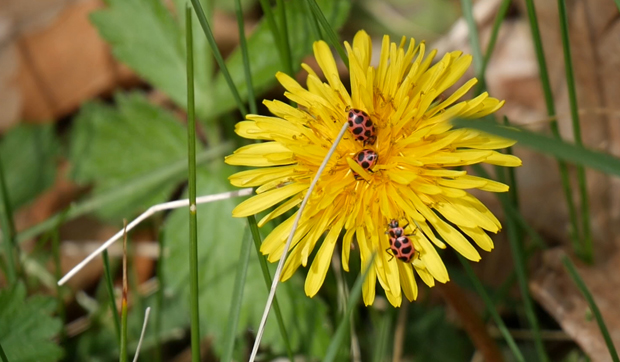 Wouldn’t you know it?

Just as our world starts to get back to normal, or what we may see as our new normal, something comes along that sets my own little world on its ear. Let me explain…

For as long as I can remember, I’ve fancied ladybugs. Maybe it’s because they’re fairly common and, as long as you don’t get too specific, easy to identify. Or maybe it’s because, growing up, they were the one insect my dear mom felt was cute and therefore acceptable to bring in the house.

Whatever the reason, I’ve had a longstanding relationship with this large family-Coccinellidae-within the enormous insect order Coleoptera, the beetles. You might too, and just not realize it.

Looking at plants outdoors, have you ever noticed small insects that look like black and red/orange alligators? Those are ladybug larvae! And like their adult form, which are highly touted as predators of insects like aphids, these rugged-looking youngsters do their share of consuming too.

Beetles in general have powerful chewing mouthparts and ladybugs, despite their civil-sounding name, are no different. Perhaps you’ve felt a nip from a multi-colored Asian lady beetle. Those same mandibles that gobble soft-bodied insects are also quite prone to pinching human skin, especially when food supplies are low. Curiously, even though native ladybugs have the same mouthparts, they rarely bite people.

At any rate, I think I was about 10 years old when I one day turned to the ladybug, or ladybird, page in my little Golden Guide to Insects. And there they were…those tiny alligators! That was right about the time I was learning about insect life cycles, so I was doubly fascinated when I also learned how the tiny gator sheds its larval skin one last time and pupates before emerging as a winged adult. As I recall, I spent quite a bit of time that summer and fall scouring plant stems for any and all forms of ladybugs.

Back then, we had quite a few native ladybug species, as compared to today when the majority of what we see are the MALB-a species imported in the 1930s to help control soybean aphids. Those memories drive me today, to the extent that every time I see a ladybug I check what kind it is, hoping against hope it’s something other than an MALB. (Fun ID tip: Next time you see a ladybug, look at the pronotum, which is the oval plate-like structure in between the head and wings. If it is white with black markings that form a W when you look back from the head, or an M, for MALB, when you look forward from behind, you’ve got an introduced lady on your hands–with any luck, not biting them…)

So imagine my surprise when, a couple of weeks ago, while videoing pollinator activity at Johnson’s Mound Forest Preserve in Elburn, I happened to notice that many dandelions there were literally crawling with ladybugs. Their numbers alone were enough to stop me in my tracks, but their shape and behavior were even more intriguing. Best of all, they were native!

These ladies, some of whom most likely were gentlemen, were reddish with multiple dark spots-12, to be exact. Their elongated bodies differed from the more common round, domed ladybug shape. And their feeding behavior was something I’d never seen before!

They were diving in among the petals of the dandelion flowerheads. But they weren’t eating insects, at least not that I could see. They appeared to be feeding on…pollen? How could this be? The Golden Guide emphasized that these eating machines are devout insectivores.

Well, it turns out, many, but not all, ladybugs are predators. And even among predatory species, plant-derived foods like pollen and nectar can be included in the diet, particularly when insects are hard to come by. BugGuide.net-the online guide I consult these days-cites a study showing that most species will consume non-prey foods to “reduce mortality during diapause, fuel migration, and enhance reproductive capacity.”

As I mulled over this new information, realizing once again that there really are very few absolutes in this world, I came across the species account for the ladybugs I’d seen at Johnson’s Mound: the spotted/12-spotted/pink spotted lady beetle, Coleomegilla maculata.

These dotted wonders consume a fair amount of aphids, as well as mites, insect eggs and larvae. But plant pollen typically makes up at least 50% of their diet, and they are the only North American ladybug species that can complete its life cycle consuming pollen alone.

Wow. But the story gets even more enthralling. Research conducted on pea and alfalfa crops indicates that destructive aphid populations drop when dandelions are interspersed in the fields, because the 12-spotted lady beetle is attracted first to the pollen in the dandelions, and then the aphids. This same ladybug also has been shown to provide good control for corn earworm, European corn borer, and Colorado potato beetles.

As we begin to emerge from our (mostly) self-imposed quarantines, dodging lawn care trucks spraying chemicals promising lush, green, weed-free grass, maybe it’s time we reexamine another long-held belief. Instead of an all-out war on dandelions, which in turn reduces the number beneficial insects associated with them, maybe we should trying leaving them be. Our pea and corn and potato plants will thank us, and the 12-spotted lady beetles will too.