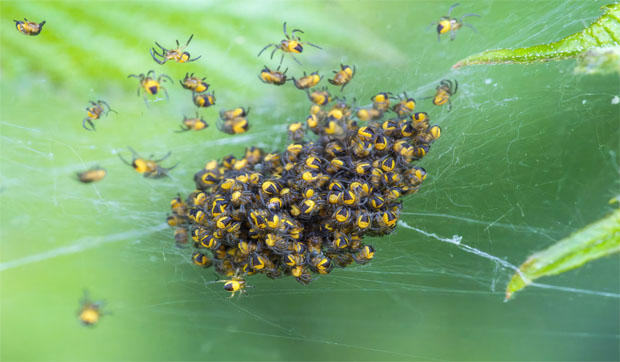 To find sufficient food and avoid getting eaten, spider hatchlings need to disperse quickly. They often take to the air, making use of silken strands, wind and electrostatic forces in a phenomenon known as ballooning.

Good Natured: Up, Up and Away! Spiders Go Ballooning

When I sat down to write this week’s column, the last thing I wanted to do is reference a song. Having included musical mentions two weeks in a row, and having been accused of planting “earworms”-catchy tunes that repeat, in your head, over and over-using music to introduce a nature topic was the one thing I’d hoped to avoid.

And then it happened. I walked into a spider web, and had an encounter with the fifth dimension.

Well, to be more accurate, a strand of spider silk blew across my face, and moments later I was listening to Up, Up and Away…the 1967 hit by the pop group The Fifth Dimension.

What connects these two wildly divergent elements is a phenomenon called ballooning, whereby certain types of arthropods take to the air on strands of gossamer silk. While spider mites, moth caterpillars and adult spiders have been observed floating by such means, today we’re going to focus on summer’s most common balloonists: baby spiders, also known as spiderlings or slings.

Spiderlings, when you think about it, come into this world with dozens, or sometimes even hundreds, of strikes against them. As they emerge from their egg sac, each one is faced with the need to feed. But what is their most immediate food source? Each other! Some succumb immediately to their larger and stronger siblings. But others, faced with the prospect of fight or flight, simply take to the air on silk strands produced by their spinnerets.

Spider silk is an amazingly strong material for its thickness and weight. We’re all familiar with it, having seen webs around our houses, yards and parks. But did you realize that these protein fibers have the same strength, per unit of measurement, as steel?

Additionally, spiders have the ability to create different types of silk, depending on use. Some types of silk are made for producing webs, some encase egg sacs, and still others are used for wrapping up fresh prey. Then there are the draglines, which are used for navigation, web building…and ballooning.

When it’s time to fly-or, actually, sail–a spiderling will climb to a high point and adopt a characteristic posture: It stands on its tiptoes (or shall we say tipclaws?) and raises its abdomen in the air. Its spinnerets, located at the tip of that abdomen, let loose with a spray of silk and off the sling goes to seek its destiny.

I remember several years ago, in my former life as a magazine editor, sitting in the Signature Room on the 95th floor of the John Hancock building. I was lucky enough to eating there on the publisher’s dime, and even luckier to score a seat by a window. But while my dining companions were oohing and aahing over the Chicago skyline, I was watching, go figure, the spiders.

I spotted several in webs strung between window frames and beams; there, despite the wind, which was significant, each amazing arachnid was holding its own, mending webs, capturing prey and doing other such spiderly chores…95 stories, or more than 1,000 feet in the air!

The Hancock spiders all had plump abdomens and seemed to be doing quite well in their sky-high homes. But they were the lucky ones.

Ballooning spiders literally throw caution to the wind. Their chances of landing safely, in a space with plentiful prey and few predators, are about as slim as the strands to which they’ve hitched their fortunes. With zero control of its destination, an airborne spiderling might move a few yards, or hundreds of miles depending on wind speeds and the obstacles and landing points it encounters. It might alight in a field full of delectable, bite-sized insects, or the maw of a flycatching bird.

New research is showing that there’s probably even more to the spiders-as-balloons story. Recent experiments have shown that spiders use their spidey senses to detect not only wind, but also naturally occurring electric fields. These forces have been shown to provide the lift a little spider needs to leave its natal space and begin making its way in the world.

There’s no doubt, we’re in the midst of ballooning season. Besides the silk across my face the other day, I’ve seen silken strands strung across my deck, my yard and the front porch at Good Natured World Headquarters.

If you look around you’ll notice the same–thin threads that glisten when the sunlight hits just right. Each was created by a young spider embarking on a wild and potentially perilous journey, heading up, up and away in a truly beautiful balloon.