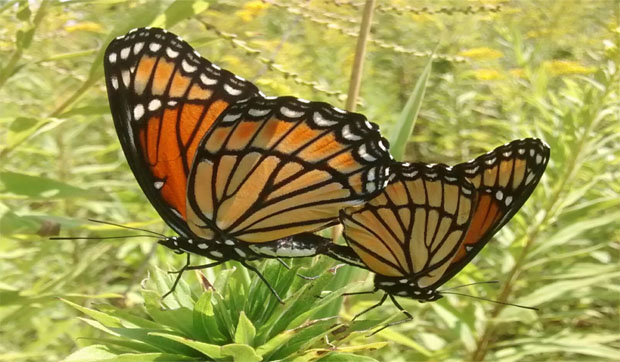 Think you’re seeing monarchs mating? Look again! These two butterflies are viceroys, distinguished from monarchs by the dark line across the hindwing and by a host of life cycle differences.

I’d wager that most people-even those that don’t care for the outdoors, and/or claim to hate bugs-can recognize the monarch butterfly. Its striking, black-and-orange form is so familiar that it has been named the state insect of Illinois and six other states.

If you’re reading this column, I’m going to guess that you’re able to identify the iconic Danaus plexippus in your sleep. Shoot, you might even be able to distinguish males from females. (And if not…look at the hindwings. Males have a black spot on a vein on each of these lower appendages. Each spot is made up of scales that produce pheromones used during courtship.)

So this week, rather than continue describing an insect we likely all know well, I’m inviting you to up your butterfly game. Instead-or in addition to–a monarch, let’s see if you can spot little Limenitis Archippus-the viceroy.

At first glance, the two species appear identical: a black body propelled by orange wings bedecked with black veins and black borders dotted with white. But look a little closer and, on viceroys, you’ll see a thin black stripe arcing across the veins on each of the hindwings. The viceroy also is a little smaller than the monarch, although unless the species land side by side, this difference can be hard to discern.

Though adults of the two species look similar, and belong to the same family (Nymphalidae, the brush-footed butterflies) that’s where the likeness ends. They belong to different subfamilies–Danainae, or milkweed butterflies, for monarchs and Limenitidinae for viceroys. This classification makes the viceroy more closely related to the red-spotted purple, a common butterfly in our area, than its doppelganger the monarch.

You can also see the difference when you study their caterpillars. Monarch cats are striped with green, yellow and black feed exclusively on Asclepias, or milkweed, plants. Viceroy larvae, by contrast, are crazy hump-backed creatures that look more than a little like bird poop and feed on a veritable smorgasbord of willow, poplar, cottonwood, apple and cherry.

These lifestyle differences continue into adulthood.

The monarch butterfly uses long-distance migration to make it through winter. Right now the group known as the super generation is preparing to journey thousands of miles to the mountainous fir forests outside Mexico City. Meanwhile, the viceroys are preparing to hunker down and ride out our Midwest snow and cold.

Now even if we have a mild winter, don’t expect to see viceroys fluttering by. Their overwintering strategy is to hatch from an egg, grow a wee little bit as a larva, then tuck inside a rolled leaf secured with silk and enter the stage of insect hibernation known as diapause. They’ll remain in that state until the daylight periods start to lengthen and temperatures start to warm, usually in late April or May.

That’s a really cool strategy that’s interesting in its own right. But you know what? There’s even more amazingness to the viceroy’s life story. Their likeness to monarchs is more than just coincidence. It’s part of a survival strategy known as mimicry.

Open any entomology book dating back 50 years or more and you’ll read that viceroys are the safer-to-consume of the two species because they lack the cardiac glycosides, or toxic heart chemicals, that many monarchs acquire by eating milkweed. The books describe how the two types of butterflies exhibit Batesian mimicry, the phenomenon whereby one nontoxic species evolves to look like another toxic species in order to avoid predation.

But-and it always seems like there’s a but when it comes to nature-the story isn’t quite that simple. As it turns out, viceroys aren’t that tasty after all. More recent studies have shown that the species can be just as unpalatable, and potentially dangerous to consume, as monarchs.

As we noted, willow is one of the viceroy caterpillar’s host plants. And willow is a plant that is rich in aspirin-like compounds. As we know, a little aspirin can be a good thing, but too much causes lots of problems. So, really, viceroys are potentially as problematic to predators as monarchs are.

Instead of Batesian mimicry, monarchs and viceroys are examples of Mullerian mimicry. Without getting too complicated, the definition of this form of imitation describes two toxic species mimicking each other, thus enjoying double the protection from predators.

To complicate things just a little bit further, some milkweed plants don’t produce toxins, so the caterpillars that feed on them aren’t toxic at all. They retain this non-toxicity into adulthood.

I’ve not actually witnessed any type of wildlife predator going after a monarch or a viceroy, but have seen a fair share of monarchs with bird bill-shaped chunks missing from their wings. And I also, many years ago, watched my baby brother eat a dead monarch I’d pinned as part of an insect collection. Was it the orange color that attracted him to the butterfly? Was it scientific research? The world may never know. But, for the record, he’s almost 54 and seems just fine.

Many types of butterflies are out and about right now, visiting a wide variety of flowers that at this time of year includes thistles, asters and goldenrods. The next time you think you’re seeing a monarch, look for black bands crossing the hindwings. If they’re there, congratulations! You’ve kicked your butterfly ID skills up a notch! Even better, you’ve found a vivacious and vibrant viceroy.