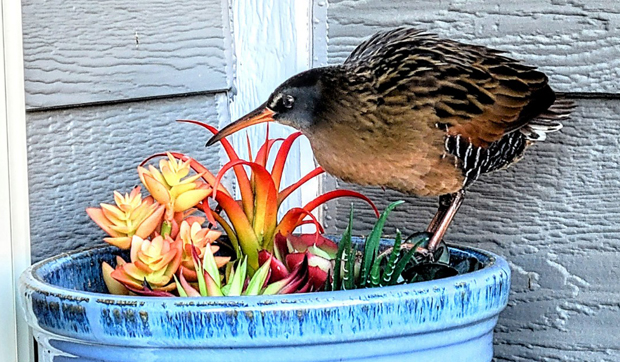 Described as bigger than a robin but smaller than a crow, the Virginia rail is a marsh inhabitant that is considered uncommon in our area.

We live in an age where, with only minimal effort on our part, just about anything can show up at our front door. Over the past year I’ve ordered and received two out of print books, a handful of vintage briar pipes and a custom motorcycle helmet. Oh, and a pizza.

A few weeks ago, when I had COVID-19, I was also the lucky recipient of soups and other get-well fare from dear friends who called first, from a safe distance, then left the goodies on the doorstep.

Sometimes though, what shows up is completely unexpected. Last year, for instance, I received a Priority Mail box that smelled heavenly, like sweet bakery goods. I got super excited but then realized the package was mailed from Texas, where I know no one, and was addressed to someone in Princeton, IL, which isn’t even close to St. Charles. With a twinge of wistfulness for what might have been, I put the box back on the step, with a note to the USPS, and had a bowl of ice cream.

But even an errant box of treats seems pretty ho-hum when compared with what showed up on my friend Amber Walker’s front porch a few weeks ago. She hadn’t ordered it and wasn’t expecting it; in fact she didn’t even know it was there until her daughter mentioned something seemed to be struggling to get out from behind the planter.

Like in a knock-knock joke but with a nature twist, Amber moved the planter to find, there on her front porch, a Virginia rail, Rallus limicola.

Rails are considered uncommon in our area, and their secretive habits and a preference for wetlands make them even harder to spot. But sitting there on the concrete step, this was one Virginia rail that was hard to miss.

“I moved the planter away from the wall and was prepared to pull him out, but with enough space to move he got out on his own,” Amber recalled the other day. “Then he sat there for about three hours and flew off at 8:23pm.

We can only guess at where the bird came from and where it was headed. Rails do migrate south in winter, and those from this region are thought to head down to the Gulf Coast. As for summer breeding grounds, they start here and extend north, through Wisconsin and Michigan and into southern Canada.

Whether here or there, the birds head for marshy areas where the cover of cattails and other wetland vegetation is thick. Their thin bodies, which ornithologists describe as “laterally compressed,” are uniquely adapted to squeezing through the narrow spaces between the plants.

With eggs on the way, the males and females work together to build not just one or two but several basket-like nests. Though only one will hold the future family, the others serve as decoys to fool nest-raiding predators.

Ah, but nest building is but one of this fascinating bird’s many fine qualities. They are keen hunters of many marshland denizens, including insects, spiders, snails and crayfish, as well as small fish and frogs.

And, speaking of frogs, if you’re out near a marsh at dawn or dusk this spring and think you hear a frog calling, but it sounds a bit wonky, it could be you’re hearing a Virginia rail. The bird’s high-pitched tick-it song, along with other cheeps and squeaks sound, to me anyway, kind of like the call of a spring peeper that’s off his game. These various utterances, along with grunts that I swear sound like a cross between a guinea pig and a real one, are good clues that Virginia rails are close by-even if you can’t see them.

Hmm… Let’s think about this for a minute. Earlier Amber said the rail had flown off at 8:23pm. But still she checked the front step 7 minutes later. What gives?

Remember how we said we live in an age where just about anything can show up at our front door? As a means of tracking those arrivals, both expected and not, many people have installed doorbell cameras. And the Walkers are no different.

Just as it captures the arrival of delivery people and other front-step visitors, their Ring camera recorded a very important departure too. So long little rail! And thanks for the reminder that, especially during migration, we should always remember to check behind the planter.