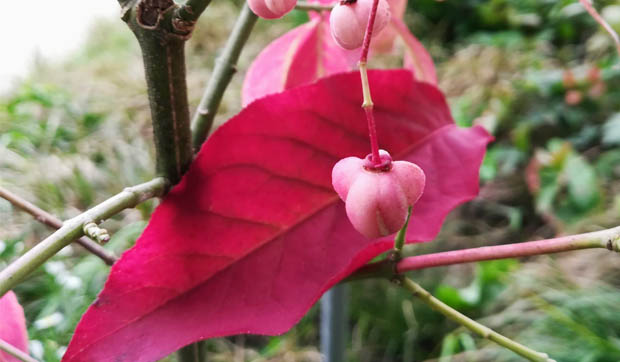 The name wahoo comes not from joyful exclamations over this shrub’s brilliant fall color, but rather from the Native American word wanhu, or arrow-wood. The plant’s slender, straight branches were at one time used to make arrow shafts.

Wahoo! Fall color is at its peak here in the TriCities!

The leafy fireworks are a little later in arriving this year, perhaps due to the number of cloudy and/or rainy days we’ve endured these past few weeks. But now that the trees have begun to cut back on the production of chlorophyll-the pigment that not only makes photosynthesis possible, but also gives leaves their green color-their crowns are ablaze with vibrant hues of crimson, gold and auburn.

While the big guys like maples, hickories and oaks grab most of the glory, another woody plant is quietly going about its business-business that includes producing not just attractive, but downright spectacular color amid our woodland understories.

This shrub, considered uncommon in our local natural areas, is a showstopper unlike any other. Besides scarlet leaves, this plant also turns sports red-orange berries bursting forth from hot-pink pods. Red, orange, pink…it’s a clash of the color titans, all together on one plant. Indeed, it’s enough to make you shout “Wahoo!”

If you do go ahead with such an exclamation, folks nearby probably will consider you exuberant about native plants. And if they know their plant species, they’ll also note that you’re 100% correct.

Wahoo is the common name for Euonymus atropurpureus, a large shrub native to our local natural areas. It’s partial to moist soil and can be found in rich woodlands as well as along streambanks.

You might be acquainted with some of wahoo’s cousins, the burning bush and spindle tree. These Asian and European imports, popular in landscape plantings, can offer a fair amount of fall color in their own right. But as so often happens with nonnative species, they come with an assortment of bad habits.

Burning bush, Euonymus alatus, is the subject of a Weed Alert issued by The Nature Conservancy’s Global Invasive Species Team. Its resistance to pests and tolerance of shade make this plant quite capable of outcompeting our native shrubs in areas where it is introduced. Such introductions occur frequently thanks to birds that eat the shrub’s fruits, which are produced in prodigious quantities. Seeds that pass through the birds’ digestive tracts germinate easily and over time lead to monoculture thickets.

The shrub did suffer a setback this past winter when the frigid temperatures and high winds of our Polar Vortex blew through the area. In a kinda funny twist of fate, many specimen burning bushes got “burned” by the severe cold, and did not survive. But in the woods, where the shrubs were more sheltered, most of the E. alatus survived.

Spindle tree, Euonymus europaeus, is also planted ornamentally. It, too, has fall color, but it pales in comparison to wahoo. As Dick Young wrote in Kane County Wild Plants & Natural Areas, “The leaves have a washed-out pink or yellowish cast in autumn and one has to wonder why this wimp is promoted instead of our much more attractive native wahoo.”

Even though all three species are distinct, in nurseries they often end up being labeled as “burning bush”–a dynamic name if there ever was one. (It may particularly resonate with those who have read the book of Exodus. I can still picture our Sunday school teacher, Miss Naomi, recreating the story of Moses and the burning bush on a felt board, the bright strips of red flannel flying about as she did her best to make crackling fire sounds and emulate the voice of God speaking from the little flannel shrub. My classmates and I were only six years old, but if Miss Naomi would have followed up her reenactment with an offer to give us each a burning bush to take home, you can bet we all would have said YES!)

If you’d like to add wahoo, and not its Eurasian relatives, to your yard’s plantings, be sure to keep any burning bush imagery to yourself, and instead shop using the plant’s two-part scientific name. Don’t let the Latin intimidate you. Euonymus comes from Greek words that mean “good name” and atropurpureus references the plant’s springtime purple flowers. All you have to do is remember that Euonymus atropurpureus is a good name for purple color (and fall colors too) and you’ll be able to purchase with confidence.

Want to see wahoo in all its seasonal radiance? Come visit us at the Hickory Knolls Discovery Center. You’ll find young wahoo shrubs, labeled with both their common and scientific names, right outside the front door. In fact, we’re such wahoo fanatics, we’ve also paid tribute to the plant indoors. The Wahoo Room, which features a gorgeous hand-painted picture of its namesake, is home base for preschool classes, Hickory Knolls birthday parties and nature-themed scout programs.

Whether indoors or out, give a shout of recognition-a big “Wahoo!”-when you spot E. atropurpureus. We share your exuberance, and we’ll be listening for you!