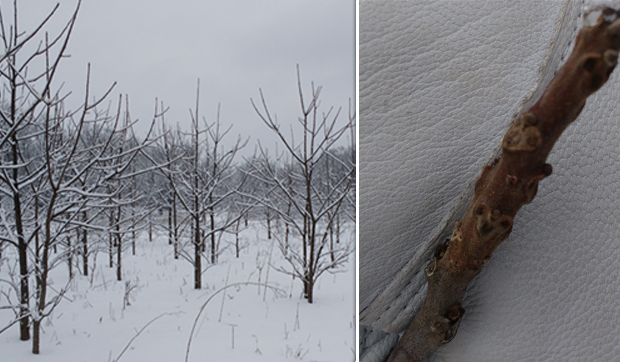 Black walnut trees are apt to form groves and are valued for their fine wood, ample fruits and a sap that can be made into syrup. Aficionados will point out that, as a bonus, leaf scars on black walnut twigs look like monkey faces.

Chances are, if you’re a Laura Ingalls Wilder fan, and/or if you watched the television show Little House on the Prairie, the name Walnut Grove carries special meaning. In the book series, Walnut Grove was the town nearest the family’s dugout home On the Banks of Plum Creek. On TV, Walnut Grove was where Pa conducted his business, Ma traded at Oleson’s general store, and Mary and Laura (and assorted other Ingallses as the show progressed) attended school.

In fact, even if you didn’t read the books or watch the show, Walnut Grove–a proper name, with capital letters–is still a pleasant village in southwestern Minnesota.

However, when you take away those capital letters, you end up with a plain and simple walnut grove. Ho hum, you say? Well, not in our area. For here a walnut grove means a grouping of Juglans nigra, the black walnut, and these trees are anything but ordinary.

For one thing, black walnuts produce…drumroll…hydrojuglone! Big deal, right? Well, let me tell you, hydrojuglone is one incredible substance. When exposed to air or soil compounds it oxidizes into juglone, a toxic chemical that can literally destroy certain types of plants that dare try to grow near the mother tree.

This phenomenon of chemical warfare among plants is known as allelopathy, and among all the players, black walnuts are king. Although the exact mechanisms through which juglone works isn’t fully understood, and other chemicals may be involved, the substance is effective in repelling native plants like hackberry and columbine, and a number of garden favorites–especially the Solanaceae, a.k.a. tomatoes, peppers, potatoes and eggplant.

Got a problem with your veggies? Got a black walnut? Blame the tree and its extensive root system. Those roots exude hydrojuglone, which converts to juglone in the surrounding soil. You might not have a black thumb after all.

Wait, I take that back. If you have a black walnut tree and harvest the fruits you may indeed have a black thumb, courtesy of the pigments in the nuts’ thick husks. Black walnuts have been used to dye hair and fabric for centuries, and just a touch of husk will leave a memorable stain on the skin (as well as decks, sidewalks and driveways).

But back to that fruit… I personally much prefer the taste of black walnut nutmeats to the more commercially available English walnut. But there’s one thing that stands between me and a freezerful of delicious nutbreads and black walnut ice cream: the effort it takes to extract that deliciousness. Black walnut shells are notoriously tough and guard their inner treasures closely.

Deer grind them with their sturdy molars, and rodents gnaw through with their sharp incisors. Crows have been observed dropping walnuts into traffic so that vehicles will run them over and expose the oily and nutrient-rich kernel inside.

But humans? While we have long history of collecting the nuts–Laura and Mary Ingalls did near their Little House in the Big Woods–even Mrs. Wilder stopped her narrative short of divulging how they extracted the nutmeats from the hulls.

Dentists would never forgive us for using our teeth, and we can’t fly above roadways. We can however drive our own cars so running over walnuts in driveways is an option for some. Other folks choose to whack the nuts with a hammer or crush them in a vice. Either way, the next step is to spend some time–pleasurable and relaxing time, I might note–plucking out the precious meat.

If nuts aren’t your thing black walnut trees do also bring some other fine qualities to the table. Actually, tables are one of them. Long prized for making furniture, black walnut wood has a unique grain, is strong and resists insects and decay.

And now that spring is only weeks away, we’re on the verge of enjoying yet another J.nigra gift: syrup! Maple trees tend to get all the glory in this department, but black walnut sap can be collected and boiled down using the same methods employed in maple syrup production. And the results are just as tasty, in my humble opinion.

Now most natural area managers I know frown on stands of black walnut, because of the trees’ aggressive nature. No they don’t snarl or whip their fruit at visitors, but they do spread with abandon and can quickly dominate an ecological community–hence those walnut groves we mentioned earlier.

But a tree with as many attributes as the black walnut deserves some respect. Next time you pass by a walnut grove, consider the tree and its many attributes. And ask yourself, “WWLIWD?*”

*What would Laura Ingalls Wilder do?