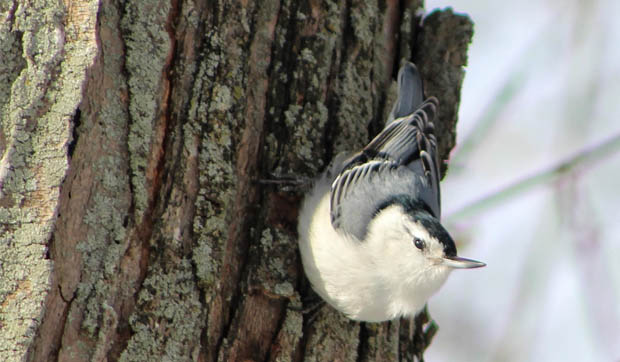 The white-breasted nuthatch may at first glance appear similar to a black-capped chickadee. But only nuthatches strike this distinctive body-downward, head-upward pose.

Every family has one. You know what I’m talking about – that one relative who is gifted beyond belief with agility and coordination.

In our family, it’s my nephew Caleb. You should see him on his backyard playset. He can flip and spin; he can hang upside down; he can fly down the slide, face first, and stick the landing every time.

In short, Caleb is a lot like a white-breasted nuthatch.

Whether you realize it or not, you’ve probably seen these birds before. About the same size as a sparrow, though sleeker in shape, Sitta carolinensis is, first and foremost, an important member of our woodland ecosystems. But it also is one outstanding acrobat. If there’s a tasty morsel at the end of a tree branch, a nuthatch will swing and sway as much as needed to nab it. If there’s a tasty morsel underneath the branch, it’ll hang upside down to grab it. And if that tasty bit is way low on the tree’s trunk, this talented bird will head down–with the greatest of ease–to stab at it with its narrow, upturned bill.

White-breasted nuthatches are easy to spot just about anywhere there are hardwood trees and, in neighborhoods, bird feeders. Even better, they’re easy to identify. The bird’s namesake white breast is balanced by a blue-gray back and wings; its white head is topped with a black cap that extends down the nape, or neck. Many birds also have a light, rust-colored cast to the feathers on the lower part of the belly and underneath the tail.

At first glance, the white-breasted nuthatch can appear similar to another bird common in our area, the black-capped chickadee. But confusing these two birds is like getting Santa Claus mixed up with Father Christmas. The differences are significant, so long as you know what to look for.

For one, chickadees’ black caps extend below their eyes, and are accessorized with a black throat patch. The white-breasted nuthatch’s black “cap” is really more of a toupee. It covers only the top of the head and neck; the bird’s facial feathers are white.

Another difference is in the birds’ bills. Chickadee bills are short and pointy, just right for carrying away small bits of wood as the bird excavates a nest. They also do a good job of pecking away at seed husks and nutshells.

Then there’s that distinctive nuthatch trait – the one that makes them the daredevil acrobats of our local woodlands: They hang on tree trunks face first. That’s right, upside down. Just like Caleb.

Although many local birds forage on tree trunks, only nuthatches glean with their head pointing downward. It’s a behavior unique to the genus, and one that’s unmistakable. And as any birder will tell you, unmistakable identifying characteristics are invaluable, no matter what the species. (Note: Red-breastednuthatches, Sitta canadensis, also occur in Kane County, in winter, and display this same head-down behavior. They’re slightly smaller than their white-breasted cousins and have a conspicuous black stripe through the eye. But because they’re typically associated with conifers, their distribution is limited. Count yourself lucky if you see a red-breasted nuthatch.)

White-breasted nuthatches occupy a broad niche in our local ecosystems. In warm weather they feed on insects as well as seeds. But it’s through seeds that many people first become acquainted with this bird, as it’s a common visitor to backyard bird feeders

But it’s in its natural habitat, our oak-hickory woodlands, where this bird really shines. There you can watch them flit from branch to branch and trunk to trunk, often hanging upside down as they poke and prod in search of food.

If you’re looking for a locally common bird species with supreme acrobatic talents – and you know you are – the white-breasted nuthatch is the bird for you.