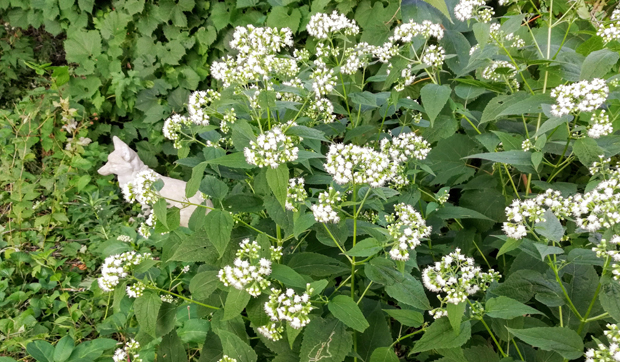 Photo Caption: White snakeroot is in full bloom in woodlands throughout our area. Its bright white blossoms brighten our shaded woodlands at a time of year when most other flowers are done blooming for the year. But its cheerful appearance belies an infamous past.

Usually when people write about wildflowers they use words like beautiful to describe the blossoms. Or terms like vigorous or conservative to describe the growth habits. But this past week, when I found a wildflower growing in my yard that I know I didn’t plant, only one word came to mind:

Well, to be perfectly honest, a few other words did come up, namely “Well look at that!” and “Where did you come from?” because yes I am one of those people who talks to plants. But “Notorious” wasn’t far behind because, let me tell you, this particular wildflower has quite a reputation.

Its name is white snakeroot, Ageratina altissima (formerly Eupatorium rugosum) and it’s the plant that likely killed Abraham Lincoln’s mom-not to mention untold numbers of other settlers in the early 1800s.

If you spend much time walking around local woodlands in late summer and early fall, you might recognize white snakeroot and its bright blooms, which stand in stark contrast to the greens, yellows and browns that blanket the forest floor at this time of year. In fact, legendary naturalist Dick Young, in his book Kane County Wild Plants & Natural Areas, described it as having “compact, cheerful blossom clusters” that “do much to enliven otherwise stale and barren landscapes.”

Those cheery white blooms belie the plant’s chemical makeup, which includes the toxin tremetol. An unsaturated alcohol, it produces a host of debilitating symptoms in the cattle that consume it as well as the humans who drink the animals’ milk.

And that’s where poor Nancy Hanks Lincoln comes in.

In 1818 the Lincoln family was living in a small settlement in southern Indiana settlement known as Little Pigeon Creek. Like southern Illinois, this area of Indiana was untouched by the glaciers of the last Ice Age and as such is hilly and forested-the perfect habitat for many sorts of woodland animals, but not particularly good as pastureland for livestock.

As much of the land had yet to be cleared, the cattle would forage in the woods, feeding on sedges and other assorted foliage…including white snakeroot.

Younger animals are more susceptible to its toxins than older ones and would often present with such diverse signs as lethargy, excessive salivation, a hunched body posture and, perhaps most noticeably, trembling limbs. (The word tremetol can be traced to the Latin tremere, “to tremble.”)

Older cows, however, remained asymptomatic and continued to be milked, passing the deadly toxin along to whatever and whomever consumed the milk-primarily calves and humans.

In the fall of 1818, there in lonely ol’ Little Pigeon Creek, Nancy Hanks Lincoln had been quite busy taking care of neighbors afflicted with “milk sickness” when she herself fell ill.

The ravages of the ailment sound ghastly; though it begins innocuously enough with a loss of appetite, it quickly progresses through a host of painful and explosive events that lead up to coma and death. Nancy got sick in late September and died on October 5. She was buried next to other victims of the disease, including the neighbors she’d tried to help. (Historical note: Some sources list Nancy’s cause of death as “consumption,” the old-timey word for tuberculosis. But for the purposes of this column, we’re sticking with milk sickness. If your research solidly indicates TB, let me know! I’m always up for more learning and am not opposed to running retractions.)

It is estimated that thousands of early 19th Century settlers moving west to Ohio, Kentucky, Tennessee, Indiana and Illinois succumbed to milk sickness. It was first described by a medical professional in 1809; in 1830 the Kentucky General Assembly offered a $600 reward to anyone who could determine the cause.

Now remember, this was back in the day when malaria, cholera, dysentery and smallpox also were rampant and little understood. Farmers who cleared their land of all native plants found that the illness also went away, but none of them made the connection to white snakeroot.

Credit for that discovery actually goes to Dr. Anna Pierce Hobbs (later Bixby) and an anonymous heroine: an elderly Shawnee medicine woman befriended by Dr. Hobbs. Taking the doctor into the woods near their home in Hardin County in southern Illinois, the Shawnee woman pointed to white snakeroot and indicated it was the cause of so much pain and suffering.

Dr. Hobbs subsequently conducted tests confirming the native woman’s pronouncement, and wrote of her findings in letters to medical institutions back East. Whether her letters got lost or ignored isn’t known, but it wasn’t until much later-in 1928-that white snakeroot was declared the official cause of milk sickness. Of course by then, due to advances in dairy management, the disease was quite rare; and Dr. Hobbs was quite (though not completely) forgotten, having died in 1873.

How white snakeroot arrived in my stale and barren backyard, I’ll never know. But it’s growing there now, beautifully and vigorously. It’s also likely thriving in a woodland or yard near you. If you get a chance over these next few weeks, head out to see if you can find some white snakeroot of your own.

If and when you do, breathe a word of thanks Anna Pierce Hobbs Bixby and her Shawnee companion. Without them, many of us wouldn’t be here to delight in white snakeroot’s cheerful blossoms…or ponder its notorious past.