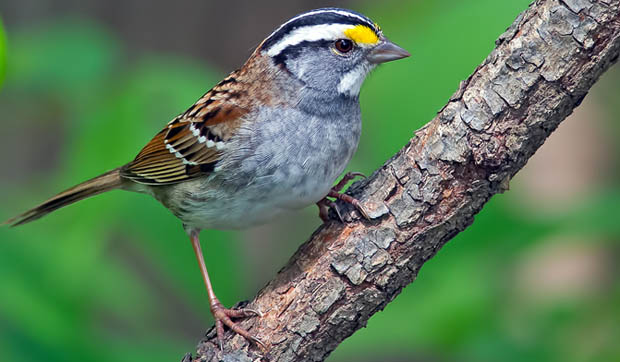 White-throated sparrows can be identified by their distinctive song, or by the following field marks: A striped head and bright white patch under the throat, along with a streaky or smudgy gray breast.

I don’t know Mr. Peabody and have no idea of what events may have led to his present condition of “poor” (or, according to some, “old”) but one thing’s for sure. This guy is The Man, at least as far as talk among the white-throated sparrows is concerned.

Bird vocalizations are often as important as plumage when it comes to identifying species. But because people and birds don’t speak the same language, we humans have found it helpful to associate words with the songs the birds sing. Used this way, the words become mnemonics – gimmicks that help us recall or memorize things more easily.

And that’s where Sam Peabody comes in. He, or it, is one of a few mnemonic devices that has been applied to the song of the white-throated sparrow. The others – Old Sam Peabody, Peabody, Peabody; O Sweet Canada, Canada, Canada; and Where Are You Frederick, Frederick, Frederick – work well too. But since “Poor Sam…” was the first one I learned and it’s the one I still rely on today.

It came to mind recently during a walk at the Hickory Knolls Natural Area in St. Charles. The clear, whistled notes hit my ears as we walked through a partially restored woodland and it wasn’t long before I saw the source. A handsome specimen, it was perched toward the end of a low, leafless branch. A few flockmates, a mixed group that included other white-throated sparrows and some juncos, scratched at the leaf litter below.

White-throated sparrows are members of the Emberizine sparrow family, a mostly brown, similar-looking group that can sometimes give amateur birders like me fits. But, unlike the Lincoln’s sparrow, which looks nothing like Lincoln, or the Henslow’s sparrow, which bears little resemblance to John Stevens Henslow, the 19th-century botanist, the white throated has a name that describes it perfectly.

A bright white patch surrounds the bird’s throat like an ascot and is bordered along the top by a black line, or “whisker,” on either side. The breast below is a streaky or smudgy gray; on both sides of the bird’s face, in the spaces between the bill and eyes called the lores, two bright yellow patches serve as other distinguishing field marks.

That’s right- two color morphs, one species. What makes things even more interesting is that the two morphs seem to seek out birds of the other plumage. That is, a white-striped bird will be seen with a tan-striped mate, and vice versa.

Further, research has shown that white-striped birds tend to be more dominant. The males especially are more aggressive, more vocal, less apt to help with raising young and more likely to be promiscuous. By contrast, tan-striped males are quieter and more helpful around the nest, sometimes to the point of becoming Mr. Mom.

The bird we saw at Hickory Knolls seemed to fit this profile. It was a white-striped morph, and it was singing. Not necessarily odd behavior, until you stop to consider that, in our area, White throateds are migrants, not residents. This non-resident status should mean that there’s no territory to defend and, therefore, not much reason to sing.

But sing it did, as do many white-striped morphs wintering here. Perhaps they’re just showing off, but maybe they’re practicing. White-throated sparrows, like many bird species, learn their songs from older tutors – typically their fathers. While the full song is what we hear most often, I’ve also heard White throateds in the early stages of this learning process, at times crooning about Poor Sam Pea…Pea…, or Poor Pea-bod-dee-dee-dee.

If white-throated sparrows are on your list of birds to see this winter, keep your eyes, and ears, open. White throateds are common in most local woodlands and also visit birdfeeders, though they are just as likely to scratch among the seeds on the ground as feed from the unit itself.

But that’s another story, for another time.