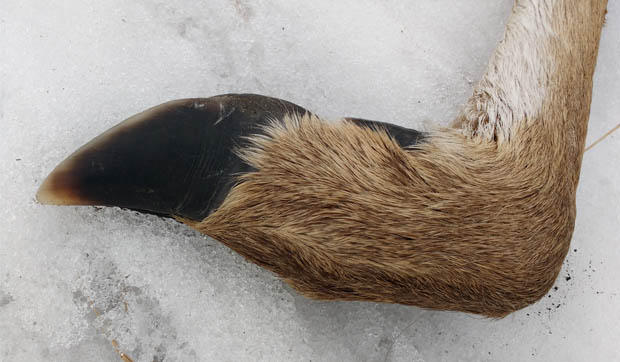 Photo Caption: When a deer goes down, its legacy lives on in the many species it nourishes. Careful observance lends insight into the ecology of  the area.

We all have dreams, don’t we?

I know I have several, including writing a book, hosting a talk show and making a perfect pie crust. But none of those are relevant right now.

This particular fantasy dates back to Memorial Day weekend 2008 and a visit to the Ledge View Nature Center in Chilton, WI. As nature centers go, Ledge View is a classic. Lots of knotty pine and taxidermy mounts interspersed with live animal displays and interpretive panels about ecology. But the thing that caught my eye that day, and has stayed with me ever since, was an exhibit enticingly titled Carcass Cam.

Someone at Ledge View (and I sure wish I knew who, because I’d like to congratulate them on their brilliance) got the idea to get a roadkill deer from the highway department and tuck it somewhere out of the way on the nature center’s grounds. Next, they mounted a motion-activated trail camera, pointed it at the deer, and waited for the fun to begin.

For wildlife in winter, finding a deer carcass is like winning the lottery. There it is, an all-you-can-eat buffet, free for the taking and open 24/7. Best of all for animals used to hunting prey, this feast doesn’t fight back.

As you might imagine, competition for such a rich resource is keen. But, as the Carcass Cam revealed, consumption of the bounty took place at a seemingly leisurely and dare I say civilized sort of pace.

Rather than frothy-mouthed battles between rival species, the photos depicted singular encounters of many animals casually eating their fill. A crow here, a red-tailed hawk there. An opossum, a mink and, if memory serves, and a chickadee  too. And then there was the gray fox, an Oh-Wow! creature for sure.

But what really made an impression on me was the impact this exhibit created, simply by providing a glimpse into what wildlife does naturally. Granted, back then trail cams were still a novel concept, but it wasn’t the technology that was the draw. It was the animals–the live ones and the dead one–that told a compelling story, with no words needed.

Ever since then I’ve kept my eye out for recently deceased deer, with mixed results. The St. Charles big bucks that locked antlers and perished in 2014 provided lots of column fodder, and a display in the Hickory Knolls lobby, but I didn’t get a camera out quick enough to see what became of the rest of their considerable bulk.

I’ve seen carcasses along roads, but couldn’t lift them by myself. Plus, even though I know the drill for reporting roadkill deer, and I’ve got a salvage permit, I’d still have to deal with the social stigma one feels when loading a big dead thing into the back of one’s Subaru.

In 2016, I was told about some deer remains near the structure we call the Monkey House in the Hickory Knolls Natural Area. But by the time I got out there they were pretty well worked over. In fact even a human scavenger had come by and sawed off the antlers.

But now, in 2019, it looks as though my carcass-seeking fortune has begun to change.

The first indication came in a couple of weeks ago, in the form of an email from our friend Greg. A regular visitor to the HKNA, Greg had been out walking with his son and dog when they came across an interesting sight-one that, he noted, “was a good lesson in biology for my 5th grader!” He attached a photo of their find. I’ll spare you the details, but suffice it to say, it was exactly what I’d been hoping for.

I called my friend and carcass co-conspirator, Valerie, who manages Creek Bend Nature Center, also in St. Charles, and off we went to check out the scene.

As we neared the site, a red-tailed hawk called excitedly from above. Then, just as we approached the scene, a dark form moved to our right. Could it be? It was! A bald eagle! It took off and flew over the field to the south. A second redtail, which had been waiting in a nearby tree, took off as well, no doubt insulted we took its place in line.

What we found, I kid you not, looked like the aftermath of a bacchanalian affair. Amid the mud and only a few bits of deer remained-a scapula, a foot, some fur. The snow was flattened for a good distance around the site and a trail, also quite well-trodden, led off to the west.

Judging by the tracks left behind, the party had included coyotes, foxes, crows and, interestingly enough, other deer. I’m sure there were other species, too, but the traffic had been so heavy, the signs were hard to isolate.

In the 48 hours since Greg had taken the photo, virtually every last ounce of nutrient-laden matter had been put to good use. Although we were too late to affix a camera, Valerie and I agreed, our hour with the deer provided an awe-inspiring opportunity to hone our tracking as well as other naturalist skills.

Little did we know our good luck was just beginning.