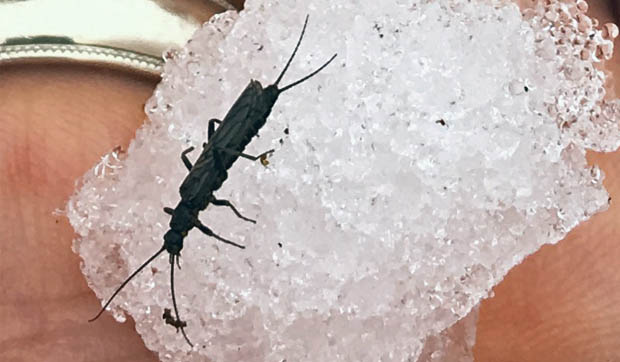 Photo Caption: Just over half an inch in length, winter stoneflies can be identified by their dark color, veined wings and two long ‘tails,’ or cerci, projecting from the abdomen. Photo courtesy of Valerie Blaine.

Make no mistake, love is in the air. Jewelers have stepped up their ads for diamond-crusted tokens of tenderness (“Every kiss begins with Kay!”) and the candy aisles of local grocers are overflowing with chocolate wrapped in red and pink (the only time of year, as far as I know, that these colors appear together on purpose).

And then we have the winter stoneflies.

That’s right, stoneflies. Insects. Out and about. Right smack in the “dead” of winter.

Okay, granted, most people do not associate stoneflies, or bugs of any sort, with Valentine’s Day and declarations of love. In fact, most folks scurry in the complete opposite direction at the mere mention of anything related to flies or bugs-especially the viral kind.

But let me tell you, winter stoneflies are worth checking out. And one place to do it locally is along the banks of Ferson Creek at Creek Bend Nature Center, which is located within the LeRoy Oakes Forest Preserve in St.Charles.

Stoneflies in general are uncommon in our area, and winter stoneflies – the type we ran into the other day- are a downright rarity. A primitive insect that has its own order, Plecoptera, these guys have roots dating to the Permian period, which was some 250 million years ago.

Plecoptera was derived from the Greek “pleco” for folded and “ptera,” or wing, and references the way the insects’ pleated hind wings fold under their front wings in a natty (not gnatty) way. But what might constitute sartorial elegance for us humans actually translates to some dysfunction for the stonefly itself. These little guys are weak fliers and so never really travel very far. As a result, their populations are localized and tend to remain that way for eons.

In addition, stonefly nymphs, or juveniles, are aquatic. And persnickety. They don’t need just water in order to survive, they need cool, well-oxygenated water that also is very clean, for they are also intolerant of pollution.

Alas, cool, well-oxygenated streams that also are very clean are increasingly harder to find in northeastern Illinois. But I digress.

The really cool thing about stoneflies is what’s going on right now, and what will continue to occur over spring and summer, as other Plecopterans mature and emerge from the water: the drumming. Stoneflies drum to attract a mate.

Now, we’re not talking Keith Moon or John Bonham or even Ringo Starr-style percussion here. Stonefly drumming is a subtle thing; it has to be. Giant stoneflies, the largest North American species, measure 2 inches long at most; winter stoneflies top out around a half inch in length. If you’re not a stonefly, you’ll need special equipment to hear the sound.

But it’s drumming nonetheless and, as one scientist puts it, the behavior “improves the efficiency of mate-finding in an otherwise silent, drab, relatively sedentary insect.”

That’s right, stonefly drumming leads to stonefly mating. Females, which mate only once, then head to a nearby waterway for egg deposition, while males, which may mate multiple times, go back to drumming. (Insert another human analogy here, if you’d like…)

The Creek Bend winter stoneflies we observed the other day looked to be in the early phases of their mating rituals. We-a class of fun-loving outdoor enthusiasts enrolled in a class that was supposed to be about mink and otters-found a lone individual making its way atop the snow on the land that forms the “bend” in Creek Bend.

The day was overcast, so the insect’s dark color-which helps it absorb warmth on sunny days-made it stand out quite starkly on the white snow. Once spotted, it was picked up, admired, photographed, admired some more, then sent on its way. Its likely destination was the creek bank and some sticks and logs-perfect drumming media, when you’re a stonefly.

Should you find yourself at Creek Bend over the next few weeks, take a walk along the creek. As you near the water, move stealthily and stop frequently as you scan the logs and tree roots. Look for small, dark insects that look a little bit like earwigs with wings and watch for rapid bobbing motions-the ardent flogging of a male stonefly looking for love.

Better than chocolate, it’s a spectacle, I guarantee, you’ll love to see.