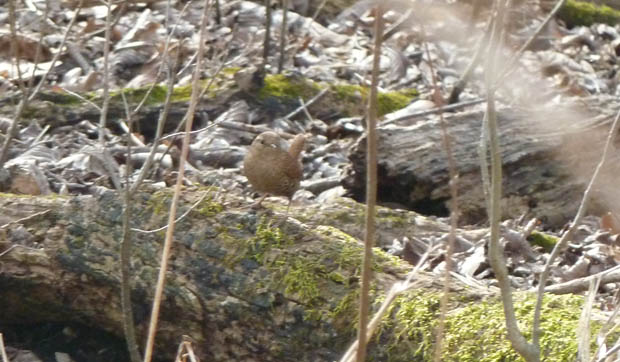 Tiny and elusive, the winter wren, Troglodytes hiemalis, measures just 4 in. long. Troglodytes means cave dweller, and refers to the reclusive bird’s habit of disappearing into crevices as it hunts for insects, spiders and other small arthropods.

I don’t know about you, but I’ve never really thought of the TriCities, or even the greater Chicagoland region, as a hotbed for cave dwellers. But what do I know?

Turns out I’ve actually seen three this year, so far. Each time the encounters were brief, so much so that I questioned whether I’d actually seen anything at all. But after this week’s sighting I decided to do a little investigating. Sure enough, the cave dwellers are here, in the form of Troglodytes hiemalis, the winter wren.

Named for its habit of creeping in and out of small holes and crevices, like a teensy troglodyte, a.k.a. cave dweller, this tiny bird visits our area during spring and fall migration. But unlike some seasonal visitors that arrive en masse, or announce their presence with loud flutters, flaps or calls, the secretive winter wren shows itself only briefly, leaving witnesses wondering whether they’ve really seen anything at all.

My first winter wren encounter this year was in early April, near the lovely ephemeral pond at Harley Woods in Campton Township. It was one of those warm spring days that makes you start to believe that winter is really, truly done. The sun was out and so were the mourning cloak butterflies, chorus frogs and wood ducks. Woodland wildflowers were everywhere and, to make the afternoon even more perfect, I hadn’t found a single tick.

Enthralled by the signs of the season, I’d sat down on a fallen tree to ponder my next move-listen for spring peepers? Search for salamander eggs?-when I happened to notice something dark dart off to my left. I looked in that direction and saw…nothing.

I was about to turn my attention back to the pond when it happened again. A brief scuttling, a glimpse of a small, dark form, and then, again, nothing at all.

The effect was similar to what we used to see in cartoons, where a character (Wile E. Coyote comes to mind) would hide himself behind a bush, pick it up, scurry, halt, and repeat, each time getting closer to his (Roadrunner) quarry. Only in this case, that the small, dark creature was coming closer was mere coincidence. I was not the intended quarry, but instead a lucky spectator to a winter wren’s energetic foraging.

I shifted on my log perch and quietly pulled my camera from its case. The next time I saw movement, I pointed and clicked, and captured a photo of the woodland floor. No wren.

A minute or so later, the little bird popped up again, and I clicked off another shot-of the woods from a slightly different angle.

The wren, aware of my presence but apparently not put off by it, continued foraging, though now in a slightly different direction. Every couple of minutes, when it would show itself for a nanosecond or two, it would be just that much farther away.

After about 20 minutes, I gave up. Disappointed, but not altogether unhappy-it was, after all, a glorious day to be out-I slid off the log and made my way over to, and into, the pond. (Did I mention I was wearing knee boots?)

Only later on, when I was back home and able to view the day’s digital images on my laptop screen, did I see that the wren and I did get our timing right. Once. The bird, only slightly blurry, was perched on a log, smack in the middle of the second-from-last picture. A glorious day, indeed!

Since then, I’ve seen winter wrens on two other occasions-last Saturday, and this past Tuesday. It would be too presumptuous to say it was the same bird, but both sightings were in the same area-the dense vegetation along the south border of the Hickory Knolls parking lot.

If you’d like to spot a winter wren of your own, your best bet is to go off in search of something else first. Aim for something easy, like, say, squirrels, or maybe the woodland fungi that are so beautiful this year.

Pay special attention to areas that have lots of leaf litter as well as hiding places–exposed roots, hollow logs and the like-with dark, miniature cave-like openings. But beware. Troglodytes hiemalis will appear very quickly. And like any good recluse, it will disappear just as fast.

I may not go out of my way to meet cave dwellers in general, but for this little troglodyte, I make an exception. And now, hopefully, you will too.