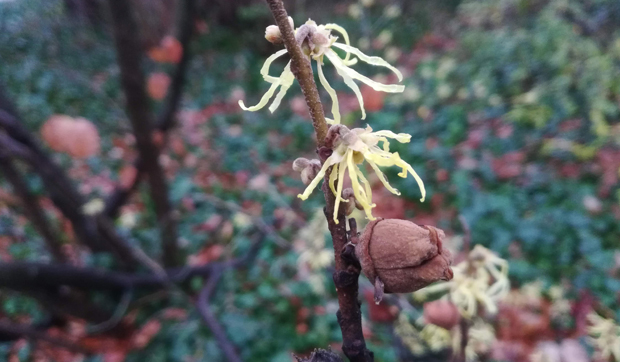 Yesterday, today and tomorrow… The yellow blooms of witch hazel, appearing now, glow next to a seed capsule that resulted from successful pollination of last year’s flowers. When it opens the capsule will send its seeds flying 10-20 feet, and future witch hazel shrubs get their start.

Witch hazel and I have had an on-again, off-again relationship for more than 50 years.

A wee bit accident prone, I’ve lost track of the number of times I’ve used the medicinal form of this plant to treat various bumps and bruises. The big egg on my forehead when I was 6; the rich hues from assorted bike crashes; the chigger bites that Would Not Stop Itching.

Provided I stay upright and itch-free, I may go months without thinking of this magical potion, as well as the native shrub from which it is derived. But then November rolls around and bam! Witch hazel is front and center again…and not because I tripped and fell.

A few weeks ago I was walking to work, drinking in the sights and sounds of a sunny, crisp morning, when I noticed a flash of color amid the browns and grays this time of year is known for. I squinted, then headed towards the cheery yellow blooms waving in the light breeze.

I tell you, I was so happy I almost waved back.

At a time of year when most plants are shutting down, our native Hamamelis virginiana is just getting started. Its flowers are small, maybe an inch across, but brightly colored in shades of lemon, gold and amber. The narrow petals curve and twist, like teeny streamers shot from wee party poppers.

They’re a party waiting to happen. And you know who’s on the invite list? Well, besides nature nerds?

Owlet moths. Namely certain sallows, brownish-drab moths that have the somewhat rare ability, among insects anyway, to warm themselves by shivering. As long as the air is 0C (32F) or above, these winter moths can heat their bodies as high as 35C (95F) and go about their nocturnal business of feeding and procreating.

For sustenance, they seek out the sap oozing from wounded trees. They can do just fine on this food alone. But if they’re lucky enough to flutter by a witch hazel in bloom…well, how can they resist? And so it is that the witch hazels lure in these vital pollinators. The plant gets what it needs and moths gets a little reward, in the form of nectar, for stopping by.

(Side note: These Eupsilia moths are pretty awesome in their own right. They’re neither large, nor colorful, but their strategy of flying when most other insects are not is genius. It frees them from the threat of predation by bats, which in summer consume moths by the mouthful but in winter are hibernating. The moths take shelter in leaf litter on extremely cold nights but otherwise carry on throughout the season. Watch for them when night-time temps are 32F and above.)

Now, flowers in November aren’t the only trick up witch hazel’s colorful sleeves. Thanks to the moths’ pollination efforts, last year’s blooms have become this year’s seed capsules, ready to burst forth at any moment and release the seeds that will become next year’s new shoots. And I do mean burst. When ripe, witch-hazel’s seed pods literally explode, flinging seeds as far as 10 or 20 feet away from the parent shrub.

Unable to resist the chance, slim though it was, to witness this amazing site, I brought home a twig of witch hazel, stuck it in a bud vase (okay, a shot glass) and set it on the shelf above the kitchen sink.

It took about a week for the capsule to open, and of course it happened when I wasn’t there. Sometime between the hours of 10 am and 8 pm on Veteran’s Day, November 11, the sides of the tiny case popped apart and flung two shiny black seeds into the air. One, thankfully, must have hit the ceiling or wall and came to rest just two feet from the open capsule; where the other one landed, however, will remain a mystery, at least to me. (I suspect my cat Jimmy may be able to shed some light on the matter, but he’s so far kept mum.)

At any rate, I’ve saved the one seed and am now researching what I need to do to get it to germinate. But I suspect it will be many months before the growing will commence, and in that time my relationship with witch hazel will switch back to off. Unless-er, make that until–I trip and fall again.