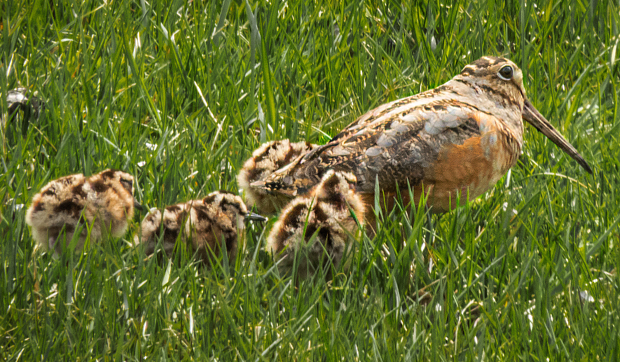 A family of American woodcocks recently emerged from a local natural area, proving that regardless of the state of human affairs, life in the natural world goes on. (Photo courtesy of Carol and John Clulow.)

In these uncertain times, a little reassurance can go a long way. And nothing’s more reassuring than knowing that (sorry for the forthcoming earworm) ob la di, ob la da…la la how the life goes on.

The Beatles sang about it, and our local plants and animals are living proof. Look outside, and what do you see? Tree leaves are popping from their buds, all set to soak up a summer’s worth of sun. Flowers are blooming, giving us pretty colors but, even more important, providing nectar and pollen for our hardworking pollinators.

The backyard birds are busy too. Each morning I have to rinse the birdbath of construction dregs-namely bits of mud and grass left by robins as they rinse the grasses they’re using to build their nests.

And then there’s the woodcocks.

I can only dream of one day having a home with habitat that is welcoming to woodcocks. But Carol and John Clulow of Elburn are living that dream right now.  The woodcock photo that accompanies today’s installment was taken in their yard in early April. But their story actually begins several years ago.

Back then, Carol and John decided to naturalize a portion of their property, which backs up to Hughes Creek Golf Course in Elburn. The planting included switchgrass and came with the prescription that it should be burned annually.

Prescribed burns, some of you might know, are a great way to maintain natural areas. Fire helps control certain types of nonnative plants; their shallow roots are damaged by the heat and don’t survive. Native plants, by contrast, have much of their biomass below ground and survive-thrive, even-when regular burns are applied.

However, a yearly burn schedule is pretty rigorous, and a lot of work. Over the years Carol and John backed off from the regimen and, over time, cattails and other vegetation moved in, creating a nice layer of duff-a layer of natural litter that includes leaves, stems and other detritus from past growing years.

There’s a movement afoot to preserve these valuable leavings, as they not only provide shelter for overwintering insect eggs, larvae, pupae and adults, but also create habitat for ground-nesting birds.

A summer resident of assorted local wet areas, American woodcocks are perhaps best known for the courtship display the males perform in early spring. Famed naturalist Aldo Leopold described the ritual in exquisite detail in his essay, Sky Dance, and watching the performance is now a staple on calendars of nature nerds everywhere.

I don’t have the column space nor Aldo’s way with words to do the dance justice, but did want to share a few highlights. The feathered song-and-dance men begin on the ground with a series of nasal “peents” that sound, to my ear, an awful lot like the peents of common nighthawks on warm summer nights. Next they rocket into the sky, as high as 300 ft., before spiraling downward, wings whistling, toward the ladies watching silently on the ground.

Leopold wrote that male woodcocks require a “stage” that is flat and open, noting that each one is a “stickler for a bare dance floor.” The reason? Woodcocks, even though they are classified in Scolopacidae-the same family as sandpipers and many other wading shorebirds-have really short legs. Dancing amid thick duff would surely result in clumsy takeoffs and inelegant landings, neither of which would impress the audience of females evaluating prospective mates.

Carol and John’s yard offered the best of both worlds: dense cover in which to camouflage (woodcocks, which are the size of a large sweet potato, are quite tasty) as well as a swath of mowed lawn-the perfect bare dance floor. In March, male woodcocks took full advantage, and in April the results of their efforts came parading through the yard-momma in the lead, followed by four recently hatched chicks.

When Carol called our office to report the event, she asked the question of whether she and John’s backing off on burns fostered the woodcock’s arrival. I’m not a land manager, but I do know that allowing plant litter to accumulate will create habitat that’s appealing for all sorts of wildlife.

With appropriate food, water, shelter and space, woodcocks and many other species can go about the various stages of their life cycle. They court, they breed, they raise their young.

Even when strange events pandemics get our human population all in a twitter, it’s refreshing to know that outside our windows, nature’s annual cycles continue. La la how the life goes on.